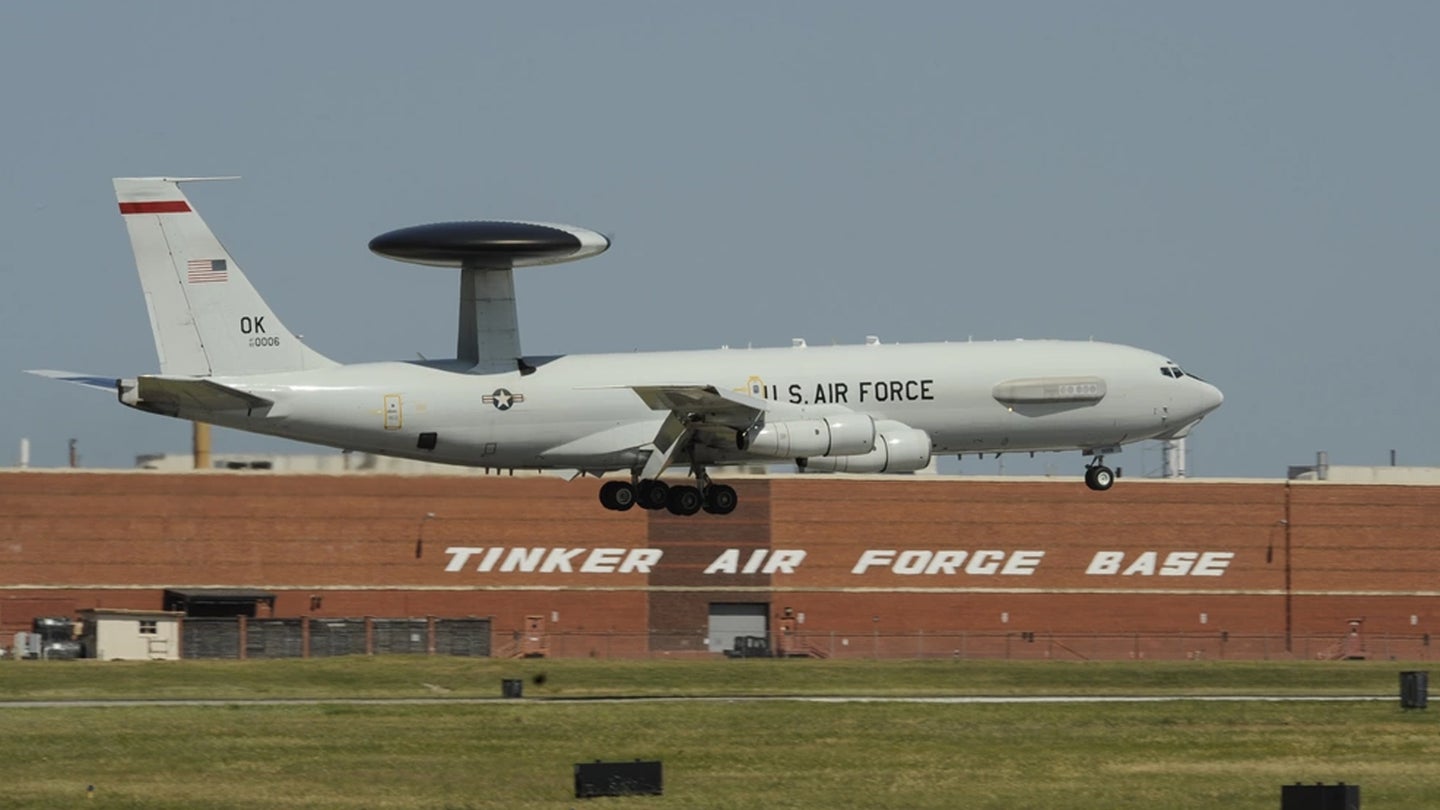 The Air Force has relieved a colonel at Tinker Air Force Base, Oklahoma who berated his airmen for not flying a training mission in dangerous conditions. Col. Gary Donovan, the commander of the 552nd Operations Group at Tinker was relieved on Monday after an investigation substantiated that he failed to promote a culture of safety and failed to maintain a healthy command climate, according to leaked investigation results.

“We need the men and women of the 552nd Operations Group to foster a culture of dignity and respect,” said Maj. Gen. Michael Koscheski, Fifteenth Air Force commander, who relieved Donovan, in a statement on Tuesday. “This means living by Core Values every day and empowering subordinate leaders to promote these values through teaching, coaching and mentorship. It takes mutual respect to develop airmen, our most precious resource.”

The trouble began in early July, when Air Force crews with the 963rd Airborne Air Control Squadron, a component of the 552nd, had to change their sleep schedules to accommodate new training sorties at short notice, but were not given the ‘no-go pills’ typically used to help them get the rest required by Air Force regulations before a mission. The 963rd flies E-3 Sentry Airborne Warning and Control System (AWACS) jets, which are converted Boeing 707/320 airliners with a large, saucer-shaped radar dome mounted on top that serve as command and control hubs during air operations.

Since the sorties required an unusual sleep schedule, and since no-go pills were not permitted, the crew showed up exhausted. They scored poorly on the Operational Risk Management test used to gauge the crew’s readiness to fly, which led the aircraft commander to cancel the sorties.

Sleep deprivation is the norm across the military, but it’s a big deal when flying large, expensive aircraft that require a great degree of focus to pilot safely. Two dozen or more highly-trained crew members work aboard an E-3, which costs the service $270 million. Air Force regulations require 12 non-duty hours before a mission, including time for food, travel and at least eight hours of uninterrupted sleep.

“If a pilot falls asleep at the stick, misses an [air traffic control] call to change altitude/heading, rotates early on takeoff, misjudges landing speed/angle, collides with a tanker during refueling, or commits any one of the other possible mistakes that they need to avoid, that’s 30+ lives and millions of dollars of equipment gone. Forever,” one AWACS crew member told Task & Purpose on the condition of anonymity since he was not cleared to speak with the press.

“And that’s just the pilot,” he said. “Every other aircrew member on the plane has their own role in keeping the aircraft safe. If an aircrew member is fighting to stay awake, they aren’t focusing on the task at hand.”

If it were a real-world sortie, “I can guarantee that those crews would get their energy drinks of choice, roll out to the plane, and fly to defend our nation,” the crew member added. “But this wasn’t real world. It was an exercise. You can’t replace the lives that would be lost if a plane went down.”

Nonetheless, Donovan was furious when the crew with the 963rd cancelled the mission.

“At no point in my mind did I think I would walk in and find out that America’s Wing, the operational heartbeat of the command and control enterprise for the free world, would show up and say ‘I can’t execute this mission,’” Donovan told his subordinates at a July 14 meeting, according to an audio recording that was first shared on the popular Facebook page Air Force amn/nco/snco.

“Not once did that cross my mind,” Donovan said. “I can’t express to you the level of disappointment I have right now.”

Col. Keven “Hitch” Coyle, commander of the 552nd Air Control Wing, said a miscommunication occurred during Donovan’s meeting with his subordinates on July 14. The crews in question had been augmented with two additional flight deck crews per jet who could have flown while the fatigued pilots slept in the jet’s crew rest area, Coyle said.

“During the briefing the Operations Group commander was trying to convey to the crew to use this option, however, this was not communicated properly.”

Coyle also wrote a post on the Wing’s Facebook page in July responding to “multiple posts regarding toxic leadership and allegations of a lack of safety culture.” In the post, Coyle sought to make a distinction between “toxic leadership” and “intrusive leadership.”

The Donovan story picked up a large following on social media forums like the unofficial Air Force subreddit and the Facebook page Air Force amn/nco/snco, where airmen could relate to the sense that the unit’s leaders were unconcerned for the safety of their subordinates.

“I think this story got big on social media because the AWACS community is huge,” the anonymous crew member said. “And we all have experienced something similar in the push for a mission by those who aren’t putting their lives at risk.”

It also tracks with an ongoing theme in the Air Force of leaders not being held accountable for their actions. Examples of this include the Air Force retaining a master sergeant convicted of abusive sexual contact and dereliction of duty; promoting a colonel to brigadier general despite her creating the most toxic command climate that investigators had seen in decades; and allowing a colonel to retire despite the fact that the unit he commanded is being investigated for sexual harassment.

Against this backdrop, the lack of transparency surrounding Col. Donovan being relieved of command prompted frustration in Air Force forums online.

“There’s ‘fired’ and then there’s ‘Air Force fired,’” wrote one Reddit user in response to the news that Donovan had been relieved. “He’ll be reassigned as the Senior Deputy Assistant to the Commander for a year or so until he can be safely rehabilitated and sent to the Pentagon to serve in [Air Force headquarters] somewhere.”

“Can we talk about why it took this long?” wrote another. “The IG report was leaked weeks ago. And let’s please not forget the [wing commander] going to bat for him publicly at the beginning of this whole cluster. ‘Intrusive leadership’ my ass. I feel like this decision was made extremely reluctantly.”

It’s in this environment that the 15th Air Force commander, Maj. Gen. Michael Koscheski, expects a “culture of dignity and respect” to be fostered.

“To grow this culture, we need all airmen to embrace this mindset and know they are the decisive factor that makes us the world’s greatest Air Force,” the general said in his statement.