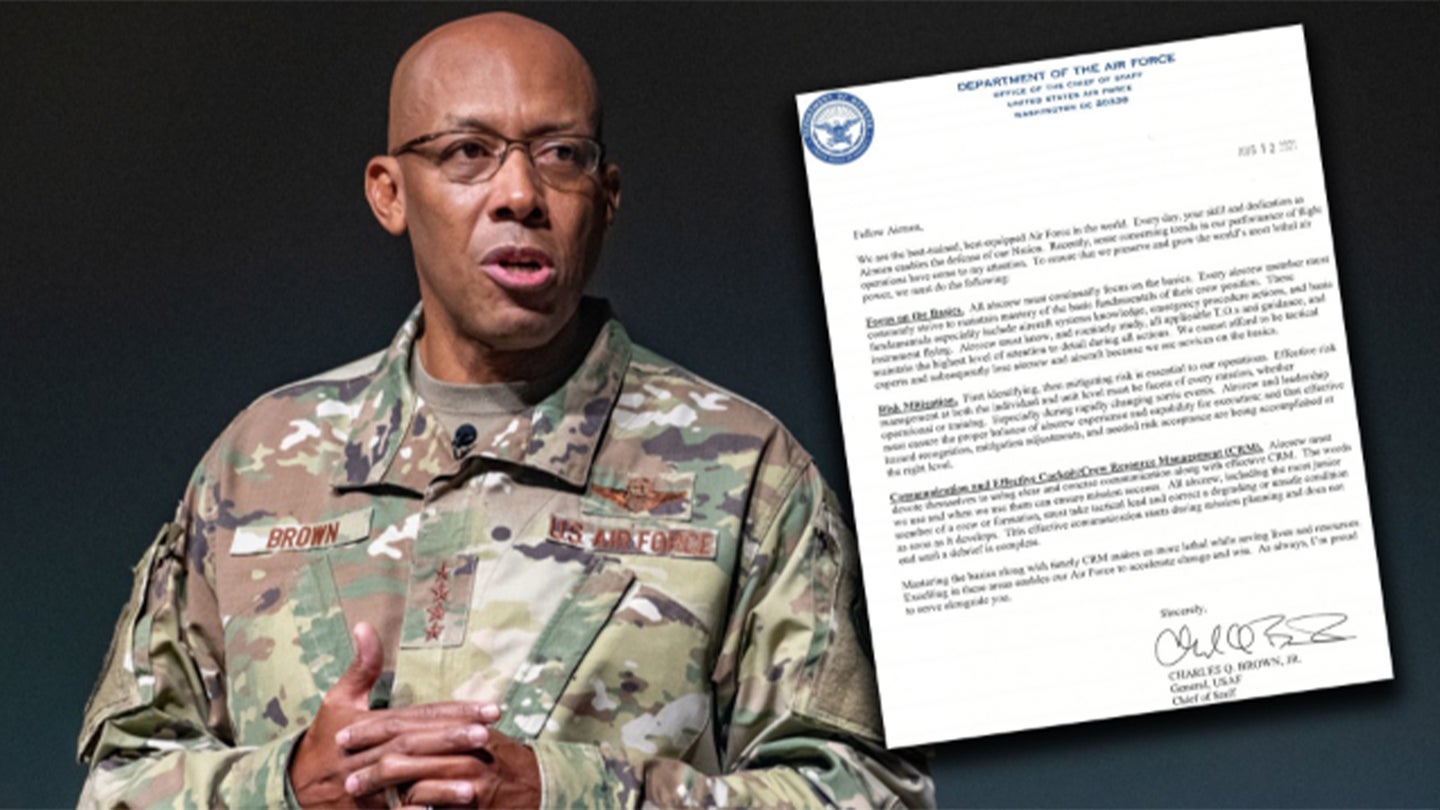 The Air Force Chief of Staff appears to have called out Tinker Air Force Base in Oklahoma in a force-wide letter reminding aircrews to follow basic safety procedures when operating aircraft.

“Recently, some concerning trends in our performance of flight operations have come to my attention,” wrote Gen. Charles “CQ” Brown Jr. in his letter on Thursday, which was shared on the popular Facebook page Air Force amn/nco/snco and on Reddit.

Among Brown’s safety reminders, one in particular stood out in light of the drama that took place at Tinker last month.

“All aircrew, including the most junior member of a crew or formation, must take tactical lead and correct a degrading or unsafe condition as soon as it develops,” the general wrote. “This effective communication starts during mission planning and does not end until a debrief is complete.”

The statement comes nearly a month after Col. Gary Donovan, the commander of the operations group for the 552nd Air Control Wing at Tinker Air Force Base, Oklahoma, berated his subordinates when they decided not to fly a training mission in dangerous conditions. Aircrews had to change their sleep schedule to accommodate new training sorties at short notice, but they were not given the ‘no-go pills’ typically used to help get the rest required by Air Force regulations before going on a mission.

Those regulations are not just for show: two dozen or more crew members work aboard the $270 million E-3 Sentry Airborne Warning and Control System (AWACS) jets flown by the 552nd Wing. If a pilot falls asleep at the stick, or if one of the crew makes a mistake while coordinating air traffic, then the results could be fatal. That kind of risk may be acceptable during wartime, as one airman told Task & Purpose last month, but it’s not worth losing lives and aircraft for a training mission.

Still, Donovan scolded his subordinates, as shown in a leaked audio recording of his talk.

“At no point in my mind did I think I would walk in and find out that America’s Wing, the operational heartbeat of the command and control enterprise for the free world, would show up and say ‘I can’t execute this mission,’” he said. “I can’t express to you the level of disappointment I have right now.”

Donovan’s boss, Col. Keven “Hitch” Coyle, claimed that a miscommunication had occurred and that Donovan was trying to remind his troops that their crews were augmented to accommodate the schedule change and the extra members could have slept in the crew rest area.

But the wider Air Force community didn’t buy it, and hundreds of commenters took to Facebook and Reddit to express their frustration with Donovan.

“I think this story got big on social media because the AWACS community is huge,” the anonymous airman quoted earlier told Task & Purpose. “And we all have experienced something similar in the push for a mission by those who aren’t putting their lives at risk.”

In the meantime though, Air Force observers believe that Gen. Brown’s letter was a thinly veiled jab at the 552nd ACW. Indeed, Brown gave a keynote speech at Tinker just two days before the letter’s release at Tinker and The Primes, an industry event connecting the base with local government and defense industry leaders.

“This has 552 written all over it,” wrote one commenter on Reddit. “Why is an aircrew safety email going out to all from General Brown?”

“I could taste Tinker again as I read it,” wrote another.

However, an Air Force official said she could not confirm whether Brown was specifically addressing Tinker or any other specific incident in his letter. Conversations and reminders about safety are constantly circulating in the Air Force, said the official, who spoke on the condition of anonymity in order to speak frankly.

“These are things we talk about all the time,” she said.

Besides encouraging aircrew to correct unsafe flying conditions, Brown also reminded them to do the following:

Whether they were intended for Tinker or not, Brown’s words are definitely ones we can all stand to hear every once in a while. Otherwise, the results could be deadly.