“I can't express to you the level of disappointment I have right now.” 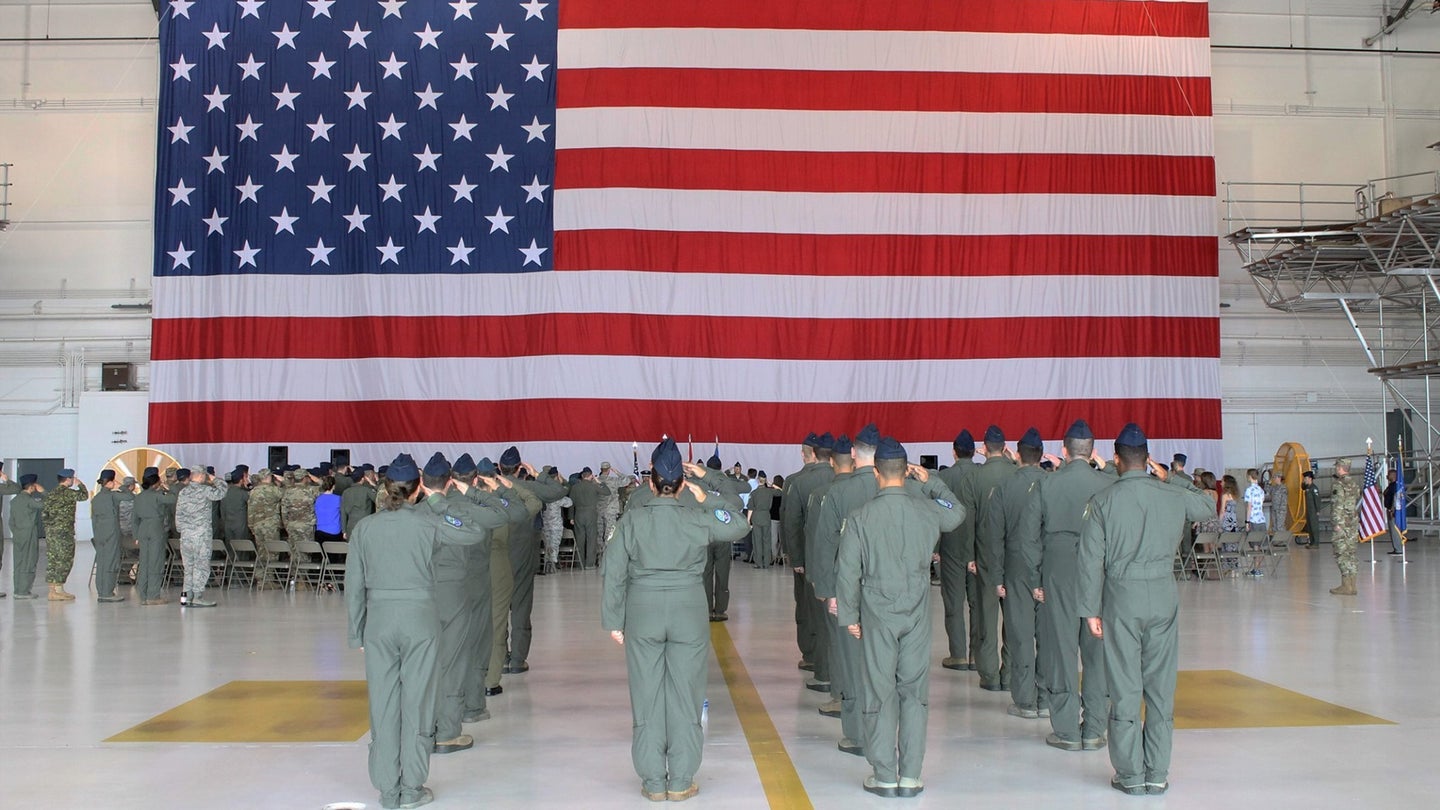 An Air Force commander took serious heat from airmen on social media this weekend for berating his crew when they decided not to fly a training mission in dangerous conditions. In a leaked audio recording of a meeting with his subordinates, Col. Gary Donovan, the commander of the operations group for the 552nd Air Control Wing at Tinker Air Force Base, Oklahoma, can be heard expressing his “chasm” of disappointment to subordinates because a training mission was cancelled last Wednesday.

“At no point in my mind did I think I would walk in and find out that America’s Wing, the operational heartbeat of the command and control enterprise for the free world, would show up and say ‘I can’t execute this mission,’” Donovan told his subordinates at the July 14 meeting, according to an audio recording that was first shared on the popular Facebook page Air Force amn/nco/snco on Sunday.

“Not once did that cross my mind,” Donovan said. “I can’t express to you the level of disappointment I have right now.”

You can listen to the audio recording below:

Air Force crews with the 963rd Airborne Air Control Squadron, a component of the 552nd, had to change their sleep schedules last week to accommodate new training sorties at short notice, but were not given the ‘no-go pills’ typically used to help them get the rest required by Air Force regulations before a mission. Go-pills like modafinil help air crews stay alert on long missions, while no-go pills such as zaleplon counteract those stimulants and help air crews sleep in the daytime or right after a mission.

The sorties at the 552nd were meant to support an Operational Readiness Inspection, which are used to judge how a unit responds to a real-world tasking, an AWACS crew member familiar with the situation told Task & Purpose on condition of anonymity since he was not authorized to speak to reporters. But since the sorties required an unusual sleep schedule, and since no-go pills were not permitted, the crew showed up exhausted. They scored poorly on the Operational Risk Management test used to gauge the crew’s readiness to fly, which led the aircraft commander to cancel the sorties.

Despite Donovan’s disappointment, the Air Force’s first principle of risk management is to “accept no unnecessary risk” and it is completely within the aircraft commander’s authority to cancel a sortie based on ORM concerns, according to the crew member, who noted they had never, in their five years of AWACS work, heard of an ops group commander tearing apart a crew for an ORM cancellation.

But when the unit gets tasked with a mission, according to Donovan, it is being asked by the chain of command to do it “for the best of the country,” the colonel said.

“I’ve never seen anybody more prepared than you guys,” he added. “I applaud you for that. But I guess that’s why the chasm is so big in my disappointment, because never did I think I would walk in and hear ‘ops isn’t a go.’ I could not process the words.”

In a statement, Col. Keven “Hitch” Coyle, commander of the 552nd Air Control Wing, said a miscommunication occurred during Donovan’s meeting with his subordinates on July 14. The crews in question had been augmented with two additional flight deck crews per jet who could have flown while the fatigued pilots slept in the jet’s crew rest area, Coyle said.

“During the briefing the Operations Group commander was trying to convey to the crew to use this option, however, this was not communicated properly.”

On Monday, Coyle also wrote a post on the Wing’s Facebook page responding to “multiple posts regarding toxic leadership and allegations of a lack of safety culture.” In the post, Coyle sought to make a distinction between “toxic leadership” and “intrusive leadership.”

Instead, Coyle said 552 leaders care about their airmen, and they will “hold you accountable for decisions in a teaching way … Sometimes they will be disappointed by decisions…this is because they care. That is not toxicity.”

Coyle also held a meeting that day with wing pilots, navigators and flight engineers to discuss what happened on July 14. Coyle asked Donovan not to attend “so that crews would feel comfortable sharing their thoughts and feelings without the pressure of having their group commander in the room,” he explained.

“The 552nd ACW commander has internally discussed the group commander’s actions and the group commander will meet with his crews to reiterate his trust and confidence with airmen,” Coyle told Task & Purpose. “This event in no way hinders the 552nd’s ability to produce and execute air dominance in support of U.S. and Allied operations worldwide but has taught the importance of clear direction and open communication.”

Coyle also said on Facebook that “safety is still paramount” at the wing. But many onlookers didn’t buy his distinction between “intrusive” and “toxic” leadership.

Why sleep matters so much in the Air Force

The story resonated with the wider Air Force community on social media channels like Air Force amn/nco/snco and the Air Force subreddit, which was soon filled with posts about the 552nd.

“I think this story got big on social media because the AWACS community is huge,” the crew member said. “And we all have experienced something similar in the push for a mission by those who aren’t putting their lives at risk.”

The importance of sleep to safe aircraft flight cannot be overstated. Air Force regulations require 12 non-duty hours before a mission, including time for food, travel and at least eight hours of uninterrupted sleep. And there’s a lot riding on everyone being alert: Two dozen or more highly-trained crew members work aboard an E-3, which costs the service $270 million.

“If a pilot falls asleep at the stick, misses an [air traffic control] call to change altitude/heading, rotates early on takeoff, misjudges landing speed/angle, collides with a tanker during refueling, or commits any one of the other possible mistakes that they need to avoid, that’s 30+ lives and millions of dollars of equipment gone. Forever,” the crew member said. “And that’s just the pilot. Every other aircrew member on the plane has their own role in keeping the aircraft safe. If an aircrew member is fighting to stay awake, they aren’t focusing on the task at hand.”

The Air Force’s emphasis on air crew rest may surprise service members from other branches, where sleep is a rare commodity, especially in combat situations. The AWACS crew member emphasized that if AWACS crews were at war, the situation would be very different.

“If it was a real world sortie, I can guarantee that those crews would get their energy drinks of choice, roll out to the plane, and fly to defend our nation,” he said. “I don’t know of any E3 member that would deny a flight if the Russians were coming no matter their state of rest. So in wartime, our asses would be flying and we would gladly do it. But this wasn’t real world. It was an exercise. You can’t replace the lives that would be lost if a plane went down.”

Most regulations, such as the one for crew rest, are learned the hard way, as one Reddit user pointed out.

“Any ‘leader’ who signs off on high [operational risk management] out of home station for an exercise or a local needs to be removed,” they said. “AFIs are written in someone’s blood from a previous accident.”

The audio also tapped into the concern across the branch that commanders prioritize sorties above all else, including the health and safety of the airmen who fly and maintain the aircraft. Part of this problem is due to limited resources, the National Commission on Military Aviation Safety wrote in a December report.

“Junior pilots and maintainers are starting their careers a lap behind, and then never catching up, all while their units buckle under the additional stress of getting them up to speed,” the report authors wrote. “This, in turn, leads to further costs. By being overworked, overstressed, and overloaded with additional duties unrelated to aviation, the morale and readiness of aircrews and maintainers erode. Experienced aircrews and maintainers leave the services and are replaced by personnel with no expertise. The average level of experience falls, and the cycle repeats.”

These problems contribute to non-combat military aviation mishaps and maintenance delays. More than 6,000 such mishaps occurred between 2013 and 2018, the report found. The incidents killed 198 service members and civilians, destroyed 157 aircraft, and racked up $9.41 billion in damages.

According to one post on Air Force amn/nco/snco, an aircraft commander said in the July 14 meeting with Donovan that she didn’t even trust herself to drive home, let alone fly an aircraft with 23 lives on board. Donovan reportedly told her in front of her crew to “take a fucking nap then.” Coyle declined to respond to Task & Purpose on whether the interaction took place, but the phrase has since become a meme on social media.

Days after news of the incident surfaced, someone posted a sign above a sink saying “All airmen must take a fucking nap before returning to work” on Reddit. It got 1,400 upvotes.

“This is an issue across the Air Force for air crew and [maintenance],” one commenter said in response. “Sorties and stats are the only thing that matters to big Air Force, until a mishap happens and then they start pointing fingers at the [people] who been getting fucked for so long.”