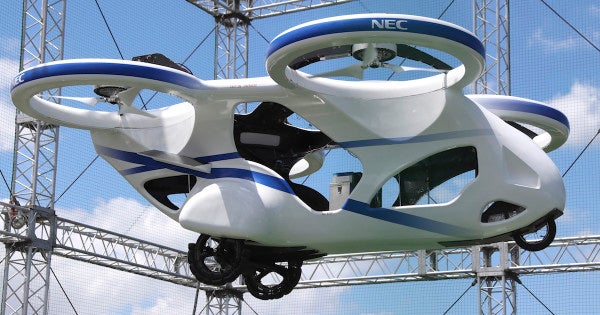 But no, it's the name of the Air Force's nascent effort to replace the V-22 Osprey with a militarized flying car — and it's set to take off sooner than you think.

Air Force assistant secretary for acquisition Will Roper stated on Tuesday that the service intends to kick off the Agility Prime program this fall to “look into where commercial innovation is going in flying cars” for potential applications to Pentagon's high-speed vertical lift capabilities, Defense One reports.

Speaking at the Air Force Association's Air, Space & Cyber Conference at National Harbor in Maryland, Roper said that he has tasked a team at the Air Force Research Lab “to come back with an acquisition strategy that has a variety of different options to pursue — a competition, a challenge, I think, is a very compelling option.”

As Defense One notes, this newfound push for a “flying car” grew out of a desire among U.S. special operations forces for a high-speed, semi-autonomous platform with “an ultra-low noise insertion signature to ferry warfighters through battlespaces too contested for conventional vertical-lift aircraft.

“We went back to [Air Force Special Operations Command] and said, 'We can also look more broadly at where commercial innovation is going in flying cars and see what's possible,'” Roper said of the program. “It may not be able to do the full mission of the Osprey but it has a lot of compelling options, especially in logistics.”

The Senate's $738 billion version of the fiscal year 2020 National Defense Authorization Act, passed back in June and currently under negotiations in conference with the House, supports the service's $25 million request as “crucial to the Air Force's ability to develop a lethal, agile, and resilient force posture and employment.”

Say it with me now: Full Metal Jetsons.