Everything we know about the Army’s new Black Hawk replacement, the Bell V-280 Valor 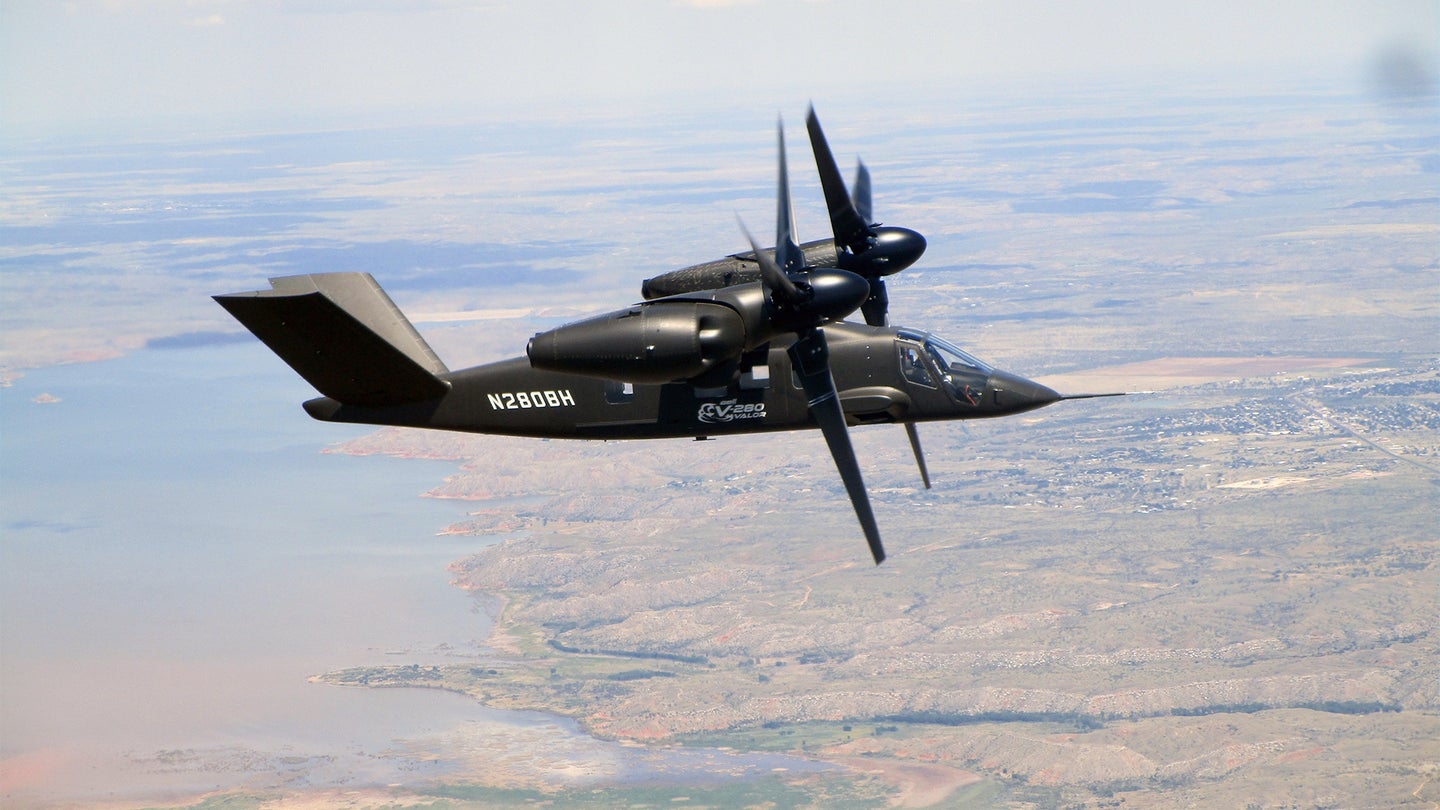 The Bell V-280 Valor during flight testing over Amarillo, Texas in 2018. (Photo courtesy of Bell).
SHARE

This is the future of Army aviation, pending years of development, possible corporate litigation, and billions of dollars: the Bell V-280 Valor.

The V-280 Valor is the winner of the Army’s years-long Future Long-Range Assault Aircraft (FLRAA) competition, meant to ultimately replace the service’s  Black Hawk helicopter in transporting troops and supplies across the battlefield. The V-280 tiltrotor aircraft ultimately beat out Sikorsky-Boeing’s SB-1 Defiant compound coaxial helicopter when the award was announced on Monday.

The initial contract, for $232 million, is to continue development of the aircraft, but then expands to $1.2 billion and then perhaps as much as $7 billion to begin building the new fleet of Valor aircraft that will begin replacing the Black Hawk in the mid-2030s.

The Valor will ultimately replace roughly 2,000 Black Hawks — which first entered service in 1979.

The Army remained fairly guarded on what ultimately prompted the decision to go with the Valor.

“Can we be more specific on the factors of how exactly we arrived at this point? No,” Maj. Gen. Robert Barrie, the Army’s program executive officer for aviation said Monday. “However, best value is meant in the truest sense that it was a comprehensive analysis of a variety of factors. No one really drove that decision. So, if you look broadly at a very high level, the factors are variables and performance, cost, and schedule, all were considered, and the combination of those are defined explicitly and evaluated … that is what I would describe as the best value … [and] what the Army would describe as its best value selection.”

The Army’s requirements for the FLRAA call for an aircraft with a top speed of 250 knots, or more than 285 miles per hour, along with an unrefueled combat radius of 200 to 300 nautical miles and a maximum range of 1,725 to 2,440 nautical miles.

The V-280 Valor first took to the sky in 2017, and logged over 200 hours of flight time before the prototype was grounded in 2021. Bell has claimed that the aircraft is capable of top speeds of up to 280 knots with a range of up to 800 nautical miles, double the top speed and operational range of the Black Hawk. The Valor can also reportedly carry 23% more troops and 25% more cargo than the Black Hawk.

The biggest difference between the Black Hawk and the Valor is, of course, the tiltrotors. While it looks similar to the V-22 Osprey, the Valor works somewhat differently. The engines remain in place in nacelles, streamlined containers, on the wing — it’s the rotors themselves that tilt up and down. They’re also what give the aircraft its high speed, which is more than 100 miles per hour faster than the Black Hawk’s top speed of 222 miles per hour.

“What Bell did with the V-280 Valor was to evolve the tiltrotor configuration into a fighting machine designed specifically for the Army air assault and utility missions in contested environments and to be maintainable in the field,” said Carl Coffman, vice president, Future Vertical Lift Strategy at Bell. “We proved that this is not going to be a risky configuration for the Army to adopt because there is no component on the V-280 that you can’t pull with organic ground-support equipment in an austere environment today.”

With a crew of four, along with up to 14 passengers, the Valor would replace the Black Hawk in its myriad of missions, from carrying supplies to air assault missions to medical evacuation. The more than three years of flight testing, which included Army test pilots, with the Valor prototype demonstrated its flight capabilities, survivability, and sling loading ability, according to Bell.

The Valor has a wider footprint than the Black Hawk, but is 20% shorter, which Bell said gives it greater flexibility in landing.

Lockheed-Martin, which owns Sikorsky, may protest the Army’s decision, which would require at least 100 days for the Government Accountability Office to review it.

If all goes according to plan, though, the first FLRAA prototypes for the Army will be delivered in 2025, with the tiltrotor aircraft expected to begin entering service in the mid-2030s.