“I thought ‘boy this is going to be a magnet.'" 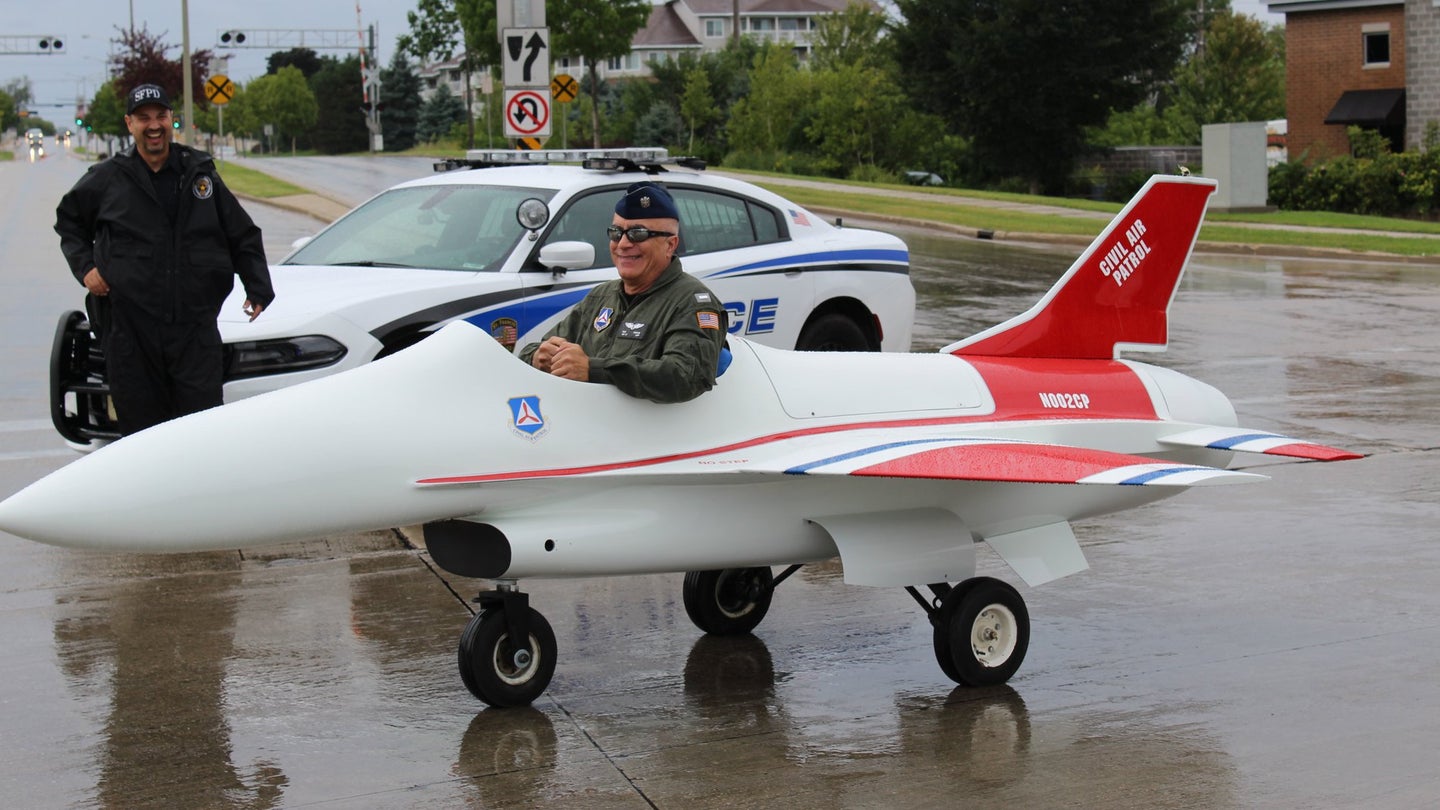 Ron Koplin was pushing the F-16 fighter jet into a steep climb when disaster struck: the lights in the cockpit started flickering and he began losing power.

“I hit the brakes but it was not enough to hold me, so I thought ‘Eject! Eject!’” Koplin said.

But ejection was not an option, because Koplin was not actually flying an F-16 fighter jet miles above the earth. Instead, he was driving a 14-foot-long mini F-16 powered by a golf cart motor up a steep hill at the Veterans Day Parade in Milwaukee, Wisconsin. The hill proved a bit too much for the tiny jet’s batteries, and it may have slid downhill if not for a few onlookers who stepped in from the sidelines to push it out of the parade.

“Any show you watch about military aircraft where they lose engine power, that’s what was going through my mind,” Koplin said.

It was the one malfunction in an otherwise unblemished service record of the mini F-16 operated by the Civil Air Patrol’s Wisconsin Timmerman Composite Squadron, a small but mighty flightless bird that has drawn the eye of thousands of visitors at parades, fairs and other events across Wisconsin.

At one Veterans Day event, Koplin recalled, there was a long line of parents throughout the day waiting in line with their children to get pictures taken with the plane. While the plane can’t fly, it serves as both a recruiting tool and a way to promote Civil Air Patrol in the community, explained Koplin, an Air Force veteran and the commander of the Timmerman squadron. An auxiliary component of the Air Force, CAP is a civilian organization that not only provides emergency services in the form of search-and-rescue or other missions, but also provides aerospace education and leadership skills to kids aged 12 to 18, Koplin said.

“You have kids coming from Illinois who see it and say they want to join CAP,” he said. “Or you’ll have old vets or past CAP cadets see it and start sharing stories.”

The mini F-16 itself is long on stories, even if it’s short on altitude. Koplin said the Air Force recruiting service made similar planes across the country as a recruiting tool in the 1980s. Originally, they may have been a bit of a fire hazard: the plane had 11-horsepower gasoline engines that ran hot and put out gas and oil fumes.

“Commanders of recruiters in Wisconsin probably didn’t want anything that would catch fire with recruiters in front of it,” Koplin said.

The gas engines were eventually replaced with battery-powered electric motors like the kind used in golf carts. There were originally 17 such F-16s in Wisconsin, all painted in the red-white-and-blue livery of the Air Force Thunderbirds, the service’s premier aerial demonstration team. But for one reason or another, the birds fell out of use in Wisconsin, and Koplin eventually found one being donated four or five years ago, and he volunteered to take it on. It would take some work, however: the fiberglass body and wings had been damaged, and many of the components, such as lights and batteries, were missing.

“When we received the plane it was basically trashed,” Koplin said.

But even in that state, the plane drew plenty of attention. The commander said that after first picking up the F-16, he stopped at a restaurant for lunch and left the bird out in his flatbed trailer in the parking lot. When he re-emerged from the restaurant, there was a crowd of about 10 people standing around taking pictures of it.

From there, the mini F-16 spent time in both the CAP hangar and Koplin’s garage as it was nursed back to health. It became a real community project: the nearby Waukesha County Technical College auto body class helped restore the body work and painting, and new batteries were donated by Veterans of Foreign Wars and a local shop called Batteries Plus. CAP members also donated or helped set up the new tires, lights, wiring, bearings and cockpit.

“We had nothing on this thing, no schematics,” Koplin said. “We just started plunking away and went on our first parade in Appleton about four years ago.”

It’s been nothing but up since then, though there have been a few literal bumps along the way. At one point Koplin gave the plane a bit too much throttle while crossing a set of bumpy railroad tracks during a parade in Appleton, and the suspension-less F-16 nearly threw him out of the cockpit.

“It was kind of like a rush but I was having so much fun,” he said.

The mini F-16 is faster than it looks. It’s capable of doing 35 miles per hour, and while that’s not quite the 1,500 miles per hour that an actual F-16 is capable of, it still packs a punch. At 35 miles per hour, Koplin said he can start to feel some lift pushing up on the wings. Don’t expect the 1,500-pound bird to take flight though: the wings don’t have much structure to them, so they are more likely to rip right off the fuselage, Koplin said. Still, the commander hopes someday he can get permission from the air traffic controllers at Timmerman airport to go full-throttle down the runway and see how fast it can go. They will need a lot of runway, because the plane was not quite designed to stop at high speed, he said.

“It’s been fun trying to figure that out,” Koplin said.

But even if it’s just standing still, the mini F-16 has drawn plenty of interest to the CAP program, which is great because it has a lot to offer. Cadets can learn a range of skills in fields such as first aid, wilderness survival, computer coding, model rocketry, leadership, aerospace science and electronics. CAP also has an Air Force-sponsored scholarship where cadets can earn their private pilot’s license without the hefty price most other civilians pay for that training. Koplin has seen his share of cadets go through CAP and continue serving, whether that’s in the military or in emergency medicine, nursing, firefighting and other fields.

In fact, right now one of Koplin’s past cadets is a U.S. Air Force Academy graduate learning to fly B-52 bombers, two more are at West Point, another just finished basic military training for the Air Force, while another works on a nuclear submarine in the Navy, but he still comes home to visit and fly around Wisconsin.

“These kids move on to big things and they come back to tell stories,” Koplin said. “It’s really neat to see these kids grow up, but I also hate it because it makes me feel old.”

The cadets may come and go, but the mini F-16 is still Koplin’s baby. He and his buddy, William Vollbrecht, lead the effort to keep the bird in tip-top shape.  “I would have to say hundreds of hours of work were put into this thing,” Koplin said.

The mini F-16 is not the only one in the country. There is at least one more like it in Wisconsin, and another has been photographed in California, where a mini F-22 Raptor fighter jet was also spotted. The Indiana Air National Guard’s 122nd Fighter Wing also has a mini F-16, complete with a mini heads-up display and a mini Sidewinder missile on the wingtip.

Fighter jets are not the only tiny planes in the Air Force arsenal. Task & Purpose has previously written about the mini C-17 cargo jet at Charleston Air Force Base, South Carolina, and a mini C-130 at Keesler Air Force Base, Mississippi.

It’s hard not to let these tiny planes into your heart. But the question with some of them is: how do you get out? The Wisconsin mini F-16 has plenty of legroom in the cockpit, but getting in and out takes quite a bit of effort, Koplin explained.