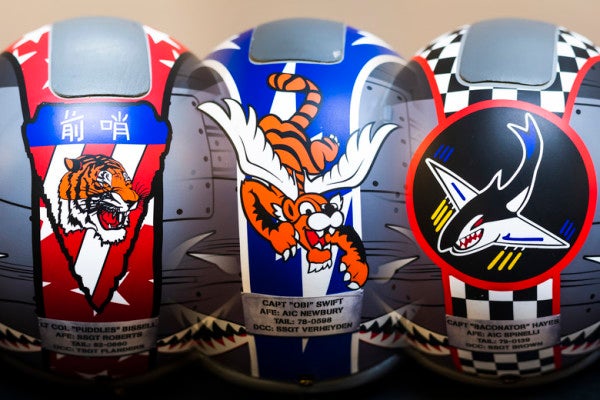 Nobody needed another reason to love the A-10, but the pilots of the 23rd Fighter Group gave us one anyway. Last month, the public affairs shop at Moody Air Force Base published an article about how the “Flying Tigers” printed out amazingly vibrant helmet wraps to wear into battle.

The helmet wraps feature the colors and mascots of each squadron within the group, as well as the signature shark teeth that are also painted on the noses of the squadron’s A-10s.

“So having that on your helmet as well, when you’re arming you can look over and see your flight lead, you see the teeth on the side of his helmet and you get that boost like ‘alright this is pretty awesome, what I’m doing,’” he said.

Apparently the wraps are a growing trend among Air Force pilots. Col. Ryan Haden, commander of the 23rd Fighter Group, got the idea from other units, according to the article.

“[H]e said ‘hey, I want to implement this for the Flying Tigers,’” recalled Capt. Jonathan Swift, 23d Operations Support Squadron Aircrew Flight Equipment flight commander. “Then he looked to me because, as the AFE [commander], I oversee the equipment. So he said, ‘okay, you're in the natural position to take care of this project.’”

Swift then worked with a local graphics and commercial printing company to design, print and form the wraps to the HGU-55/P helmet used by 23rd Fighter Group pilots. It took a lot of back-and-forth, he said, but he got it done.

All the wraps in the group have shark teeth and an aircraft metal background, but each squadron has its own unique look.

The 74th fighter squadron has a blue stripe with a white lightning bolt running down the back, while the 75th has a black and white checkerboard and the 76th has red and white stars, Swift explained.

Though each squadron's helmet wrap is different, they are meant to connect 23rd Fighter Group pilots to a common heritage that dates all the way back to World War Two.

The group first formed out of the “The Flying Tigers,” a group of American volunteers who provided air defense for an Allied trade route running from India to China. The 23rd inherited the same mission as the volunteers, and soon it was intercepting Japanese fighters and bombing enemy infrastructure in support of Chinese forces.

The Flying Tigers’ sparkling combat record didn’t end in World War Two. Fighters from the 23rd FG were the first to land in Afghanistan in March 2002, according to the unit’s website, and the Tigers have been BRAPPing throughout the Global War on Terror ever since.

“We’re a part of the 23rd Fighter Group, a very historic unit within the Air Force,” Swift said. “There's a lot of heritage that comes with that. So there's a strong connection between putting these wraps on the helmet and that heritage that we all share.”