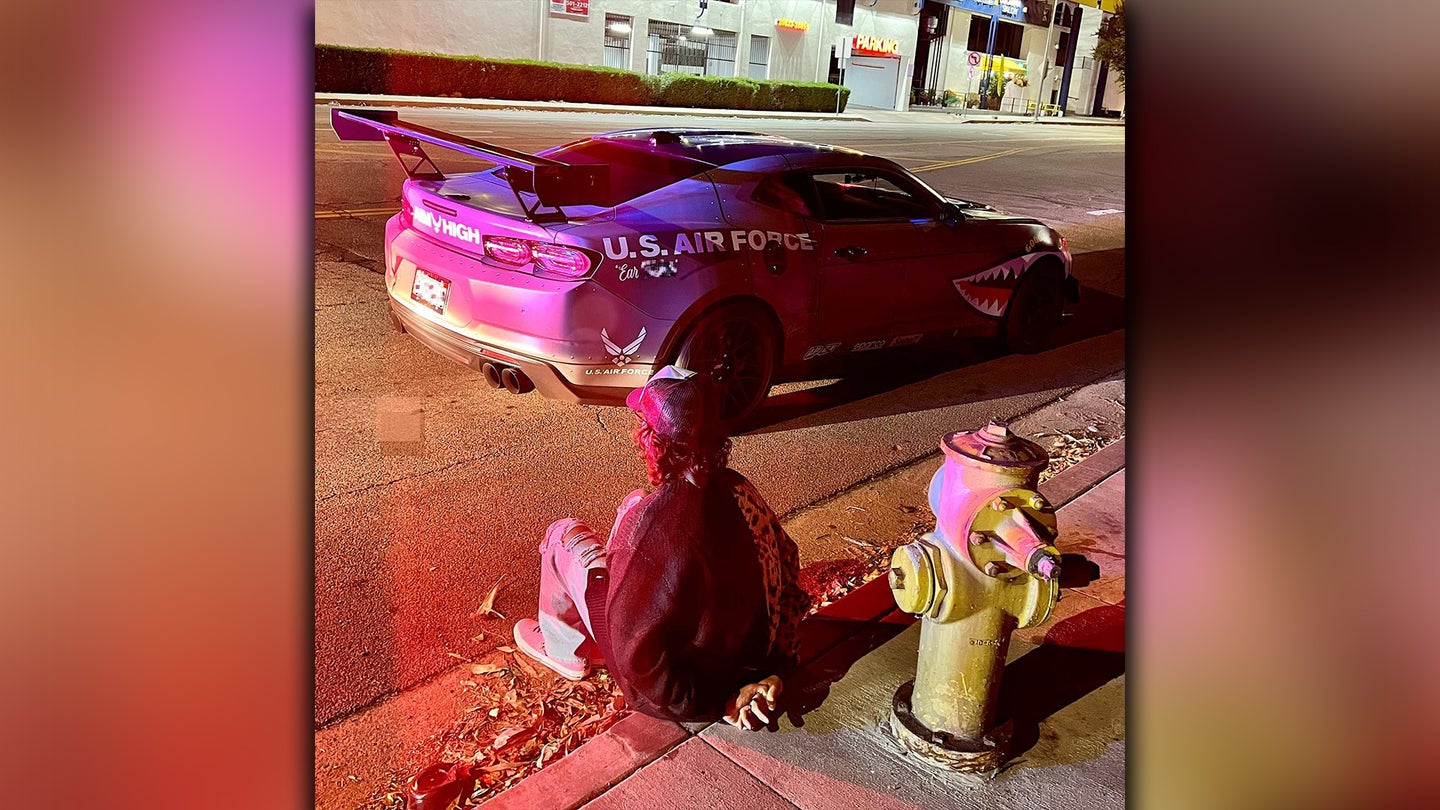 The “need for speed” hits some of us harder than others. Earlier this month, officers with the California Highway Patrol – West Valley pulled over a man allegedly driving a Chevy Camaro going 131 miles per hour in a 65 mile-per-hour eastbound section of the 101 Freeway.

What makes this incident more than local crime blotter fodder is the Camaro, which is covered with U.S. Air Force insignia, mottos and a fighter-jet style paint job. It even has the Air Force recruiting logo, “Aim High” written on its rear bumper, beneath a spoiler that should at least have its own social security number if not its own zip code.

Believe it or not though, the Camaro is not a military-owned vehicle, CHP West Valley told Task & Purpose. No, it is owned by the driver, who is not a member of the military. That means the Air Force’s biggest fan was caught allegedly driving his Big Blue moto-wagon at nearly a third of the top speed (420 mph) of the A-10 attack plane on which the paint job seems to be based.

“Doctor form: ‘are you on flying status?’ This guy: ‘yes, yes I am,’” wrote one commenter on the popular Facebook page Air Force amn/nco/snco, which shared CHP’s post.

“Accelerated change taken too literally,” wrote another, referring to Air Force Chief of Staff Gen. Charles “CQ” Brown Jr.’s well-known plan to get his branch ready for a war with China or Russia, called “Accelerate Change or Lose.”

“I thought nothing could stop the US Air Force,” wrote a third.

The driver was detained, cited for driving over 100 miles per hour and released, according to CHP. It is not a felony to go more than double the speed limit, unless a driver is cited for reckless driving, which would be considered a misdemeanor, the agency explained.

Notably, the Air Force actually has a long history with the Chevy Camaro. In 2015, the public affairs shop at Goodfellow Air Force Base, Texas, highlighted one owned by Tech Sgt. Stephen Strong, of the 315th Training Squadron. The car sported a gunmetal gray paint job, rows of shark teeth and a cartoon flying tiger on the doors. The decor was an homage to the Flying Tigers, the American pilots who fought the Japanese in present-day Myanmar and China in World War II.

“The second car I ever painted was this one,” Strong said in 2015 about his Camaro. “I was walking out of the headquarters building for the 14th Air Force and there was a 1940’s P-40 Warhawk on static display. I was looking at it and I thought this would be a really cool idea to do the teeth design.”

It paid off, and at the time the airman got a lot of attention for his sharp work.

“Once it was finished, it became famous almost overnight,” he said. “I was offered to bring my car to exotic car shows with some 200 Ferraris and Lamborghinis. My car was the only domestic vehicle present.”

Like many A-10 attack planes today, the P-40 Warhawk fighter planes flown by the Flying Tigers sported rows of shark teeth near its nose. Strong’s Camaro was painted in reference to the Warhawk, though it was unclear whether the teeth painted on the California speedster’s car referred to Warhawks or A-10s.

Either way, the Chevy Camaro is a great choice of canvas for Air Force fans. The service actually uses the sports cars to help guide pilots as they land U-2 “Dragon Lady” spy planes. The U-2 is notoriously difficult to land, so the Camaro driver, who is also a fully-qualified U-2 pilot, drives alongside the aircraft and tells the pilot over the radio how much space remains between the aircraft and the runway, whether they’re lined up with the center line, whether the wings are level and if any other adjustments are needed.

“On a windy, rough air day, the [driver] can be extremely busy helping the pilot ride a 40,000 pound bicycle down the runway!” the Air Force wrote in a 2019 news release about the chase cars.

Part of the reason the U-2 pilots can’t make those judgments themselves is because they wear a big bulky pressure suit and helmet which keeps them safe at high altitude, but which makes it impossible to see the sides of the airplane and the wings.

“Worse yet, on humid days the bottom section of the front canopy can fog over,” the Air Force wrote. “The translation to all of that is that you can’t see very well and you need a wingman to help you land.”

The branch has also used Pontiacs, Subarus, Mercedes, Audis and other cars as chase vehicles, the Air Force wrote, but the Camaro keeps coming up as a canvas for airpower aficionados. Take, for example, this grey-painted Chevy, complete with an Air Force roundel on the doors, the branch logo on the hood, and an F-16 fighter jet silhouette on the back. Even better, check out the official Air Force-sponsored Camaro driven by Bubba Wallace in the NASCAR Cup Series, which also features teeth on the fender.

The Air Force has even souped up Camaros in times of war. In the early 1990s, Air Force technicians helped a retired Danish commando add bullet-proof panels, night vision systems, infrared-defeating paint, a mine-clearing blade, a ground-to-air radio system, and 200 horsepower to a 1979 Camaro so that the commando, Helge Meyer, could sneak past hostile fighters to deliver food, medicine and other supplies to civilians in Vukovar, in the war-torn Balkans, according to Military Times.

“By the end of its modification run, the Camaro was now ready for war and its driver — Meyer — was ready to roll, armed with only a Bible, a pack of smokes, and protected by a donated [flak] vest and helmet,” Military Times wrote.

Whether or not the California driver was aware of this history when he allegedly floored it on Dec. 2 is unclear, but it certainly adds another chapter to the Air Force’s storied relationship with the Camaro. Vrroom vrroom!