'Now is the time to be reminded of the grim reality that we all face if we don’t stop them.' 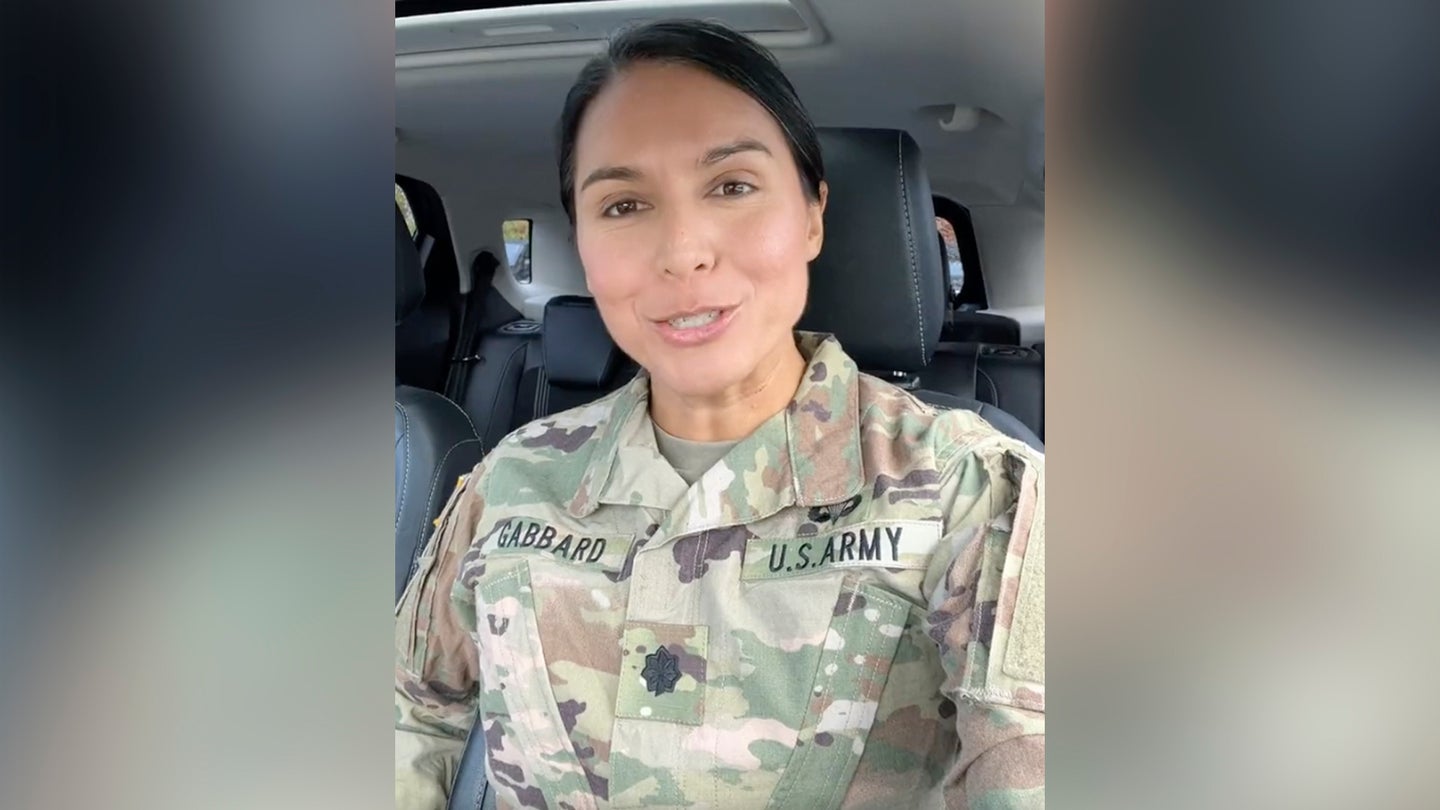 Former Congresswoman Tulsi Gabbard, an Army Reserve lieutenant colonel, may have once again broken military rules on political activities by making a video in which she wore her U.S. military uniform while accusing “self-serving politicians” and others of wanting to start World War III.

In Dec. 8 video posted on Twitter and Instagram, Gabbard said she had completed her Reserve Duty at Fort Bragg, North Carolina, before warning that America could be on the brink of a catastrophe that would dwarf the carnage unleashed by the Japanese attack on Pearl Harbor in 1941.

“I’ve been thinking about how infinitely greater the death and suffering will be if we allow the mainstream media, the military-industrial complex, self-serving politicians – if we allow them to lead us now into the apocalypse of World War III,” Gabbard said. “So, now is the time for anyone who cares for their loved ones, who cares for our fellow Americans, who cares for all human beings and wildlife; now is the time to be reminded of the grim reality that we all face if we don’t stop them.”

She did not say exactly how people should “stop” the groups and individuals whom she claimed were planning Armageddon.

It was not immediately clear whether Gabbard could face any disciplinary or administrative recriminations for her video.

When asked about Gabbard’s comments, a Pentagon official sent Task & Purpose a copy of the Defense Department’s policy that says troops must “refrain from participating in any political activity while in military uniform.”

Army Reserve spokesman Lt. Col. Simon B. Flake said that Gabbard’s comments were hers alone and did not constitute an official Army Reserve statement.

“We are aware of a video posted by Lt. Col. Tulsi Gabbard, a U.S. Army Reserve officer currently assigned to this command, to her personal social media pages Dec. 8, and we’re considering her statements in the context of Department of Defense and Army policies,” said Maj. Dan Lessard, a spokesman for 1st Special Forces Command (Airborne). Lessard did not say whether Gabbard would face disciplinary action.

Gabbard, a Democrat who represented Hawaii from 2013 to 2021, is no stranger to skirting the military’s policy that lists prohibited political activities for troops. In 2018, the Hawaii Army National Guard told Gabbard to either take down campaign material showing her in uniform or add disclaimers making clear that the military was not endorsing her, the Honolulu Star-Advertiser reported at the time.

Her recent comments likely not only run afoul of the military’s policy that prevents troops from making political statements while in uniform, but they could also violate the Defense Department’s instruction on wearing military uniforms, said retired Marine Col. David Lapan, a former Pentagon spokesman.

That instruction says that service members may not wear military uniforms, “During or in connection with furthering political activities, private employment, or commercial interests, when an inference of official sponsorship by DoD or the military service concerned for the activity or interest may be drawn.”

Lapan noted that troops are also strictly prohibited from wearing their uniform when doing so “may tend to bring discredit upon the military services.”

That standard could apply to Gabbard’s ominous warning at the end of her video, said Lapan, who added that Gabbard made these comments while on duty.

Gabbard’s video is just the latest example of the military’s longstanding tradition of remaining apolitical coming under stress. In September, Marine Lance Cpl. Hunter Clark was investigated after he appeared onstage with former President Donald Trump at a political rally in Georgia.

The II Marine Expeditionary Force Inspector General subsequently determined that Clark had not engaged in prohibited political activities, so he was not disciplined, Marine Corps spokesman Maj. Jim Stenger said in November.

Marine Lt. Col. Stuart Scheller was court-martialed after he wore his military uniform while speaking publicly about the failures by military and civilian leaders before and during the chaotic Afghanistan withdrawal. His initial commentary evolved into sharp criticisms of general officers, such as Marine Gen. Keneth McKenzie Jr., the head of U.S. Central Command,and calls for changes in the military system writ large.

Scheller eventually pleaded guilty to showing disrespect toward superior commissioned officers and other offenses as part of an agreement with prosecutors.

Doug Collins, a former Republican Congressman from Georgia, was warned by the Air Force in October 2020 that his Senate campaign materials showed him in his dress uniform but did not include a disclaimer making clear he was not endorsed by the Pentagon or the Air Force.

Harold Earls, former Commander of the Guard, Tomb of the Unknown Soldier, came under investigation in May after he used footage taken at Arlington National Cemetery in a video for his Congressional campaign. The video, which included scenes of Gold Star families grieving, was eventually taken down.

Army Reserve 1st Lt. Alex Stovall was also investigated after he appeared in uniform while being interviewed on the right-wing cable channel One America News Network about his campaign for Congress. In a separate interview during which he was not in uniform, Stovall told Gun Freedom Radio that he did not think President Joe Biden was actually the president.

“I think we have seen more and more candidates for office using their uniform, using their rank in ways that are inappropriate,” Lapan said. “Some of them end up taking down the ad or altering the thing but I think it’s accurate to say there haven’t been many consequences for misusing the uniform and bringing the military into political activities.”