Gabbard has often claimed that Syria is not a U.S enemy, although she did call Assad a "brutal dictator" this year. Still, questions have lingered about how far she is willing to go to criticize Assad 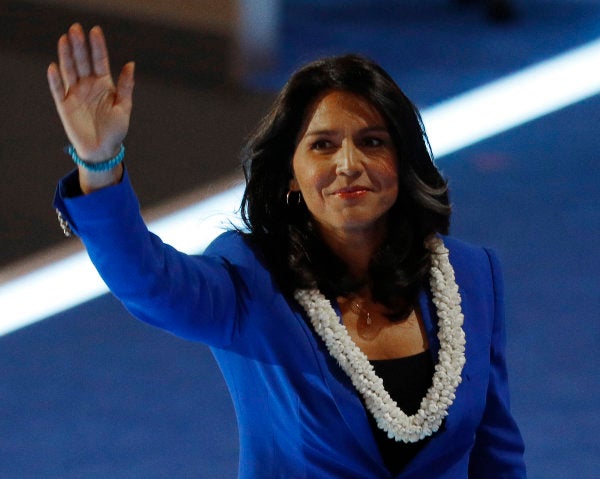 Assad's forces are widely believed to have launched chemical weapons attack against Syrians in 2013, 2017, and 2018. U.S. officials have said they are confident that Assad has used Sarin and chlorine gas against Syrians, and President Donald Trump has twice ordered U.S. military strikes against the Assad regime as punishment for the chemical attacks.

Following a campaign stop in Virginia on Monday, Task & Purpose asked Gabbard directly if she believes Assad used chemical weapons against his own people.

She replied with one word: “Yes.”

But that's not the whole story. Gabbard's strategy for defending Assad has been to raise the possibility that Syrian rebels are responsible for other chemical or chlorine attacks. On her campaign website, Gabbard says she doubts that Assad's forces carried out two chemical attacks in 2017 and 2018.

“Both attacks occurred in towns under the control of al-Qaeda-linked opposition forces,” Gabbard says on her website. “Both attacks resulted in multiple civilian casualties, and both were immediately blamed on the Assad government. However, there is evidence to suggest that the attacks may have been staged by opposition forces for the purpose of drawing the United States and the West deeper into the war.”

Again on Monday, Gabbard told the audience at her campaign stop that she continues to seek answers about an email posted by Wikileaks from an alleged whistleblower, who claims the Organization for the Prohibition of Chemical Weapons lied about one attack blamed on Assad's forces.

The U.S., French, and British military launched missile attacks against the Syrian regime on April 13, 2018 as punishment for the attack.

“I think the underlying issue here that you are pointing to is: Why it's important to gather evidence and facts before making that decision to mobilize our troops to take military action,” Gabbard told a member of the audience.

To square that circle, Task & Purpose asked Gabbard how she can say that Assad is responsible for using chemical weapons in Syria while at the same time entertaining the possibility that his regime was not behind the chlorine attack.

“Because facts and evidence matter,” Gabbard replied. “There are very specific incidents that the OPCW investigated and the whistleblower-leaked reports offered a very different conclusion than the one that the OPCW released. I believe that the truth is important.”

Gabbard's complicated defense of Assad began after she visited him in 2017. She told CNN's Jake Tapper afterward that there were no moderate rebels in Syria and that if Assad were overthrown, Al Qaeda or another terrorist group would take over Syria.

“I'll tell you what I heard from the Syrian people that I met with, Jake, walking down the streets in Aleppo, in Damascus, hearing from them,” Gabbard said during her 2017 interview. “They expressed happiness and joy at seeing an American walking through their streets, but they expressed the question. They said: Why is it that the United States, its allies and other countries are providing support, are providing arms to terrorist groups like Al-Nusra, Al Qaeda, Ahrar al-Sham, ISIS, who are on the ground there raping, kidnapping, torturing, and killing the Syrian people – children, men, women, people of all ages.”

“They asked me: Why is the United States and its allies supporting these terrorist groups who are destroying Syria – when it was Al Qaeda who attacked the United States on 9/11, not Syria,” Gabbard continued. “I didn't have an answer for them.”