For many Syrians, the Russian military’s brutality in Ukraine is all too familiar

Familiar with the horrors of Russian bombing campaigns, Syrians are showing solidarity with Ukrainian survivors. 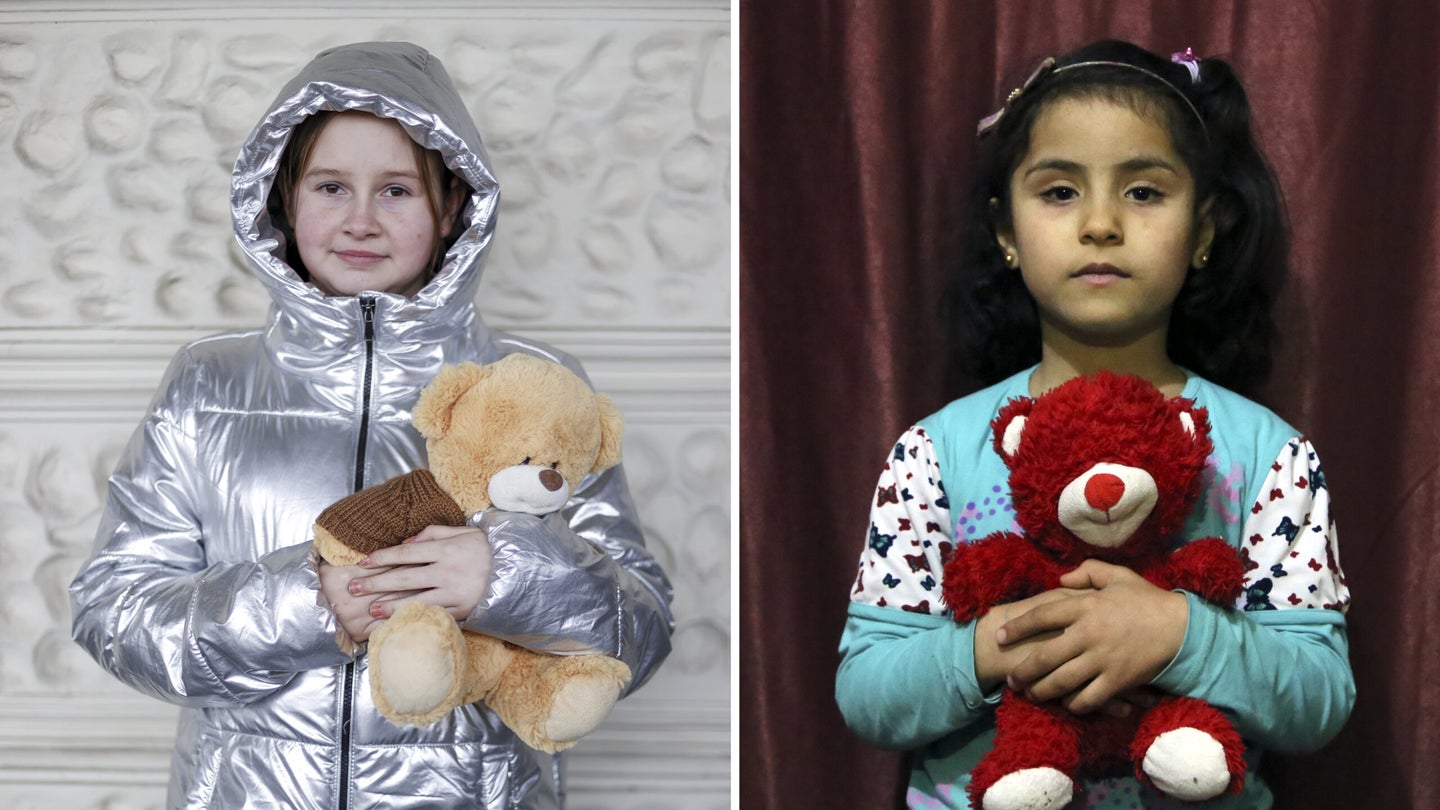 Photos emerging during Russia's attacks on Ukraine bear similarities with the images taken during the Syrian Civil War. A photo dated on March 4, 2022 (left) shows an Ukrainian child posing for a photo with her toy after crossing Ukrainian-Polish border due to Russian attacks on Ukraine, in Przemysl, Poland and a photo dated on December 11, 2015 shows Syrian girl Melek Emir holding her teddy bear that she brought from Syria in the Reyhanli district of Hatay, Turkiye. (Abdulhamid Hosbas, Cem Genco/Anadolu Agency via Getty Images).
SHARE

When the Syrian Revolution began in 2011, former Aleppo, Syria, resident Ahed Festuk peacefully organized with students and other citizens. Then came the bombs; first from the Syrian regime.

“Many of my friends were killed, detained, or left,’’ she said. “I felt like I was supposed to stay until I die. Honestly, I was waiting to die.”

When she learned the Russians were helping Syrian President Bashar al-Assad’s regime, she lost hope. Festuk left shortly after the Russians entered the Syrian airspace.

In light of the Russian invasion of Ukraine, Festuk is one of a number of Syrians speaking out about their experiences with Russian military brutality. In a bond formed from war, the Syria Ukraine Network is connecting Syrians with relevant wartime experiences to Ukrainians. Its coordinator, Olga Lautman, also a senior fellow at the Center for European Policy Analysis, said the organization is connecting Syrian lawyers, human rights activists and doctors to those working in Ukraine.

“Syrian groups, who have been dealing with this scenario and are now witnessing what’s happening in Ukraine, have reached out and offered to help in any way they can,” said Lautman.

The effort took on a new urgency recently when Russian President Vladimir Putin appointed Gen. Alexander Dvornikov to oversee operations in Ukraine. At the behest of Syria’s president, Dvornikov previously oversaw Russian operations in Syria, where he became known as the “Butcher of Syria” for his brutal bombing campaigns.

According to experts, Dvornikov’s appointment is proof the Kremlin’s operations in Ukraine are not going according to plan.

In a recent Council on Foreign Relations webinar, Gen. Philip Breedlove, former NATO Supreme Allied Commander, said it was obvious Putin had not met at least one of his major goals. “It is very clear by the way he initially deployed forces and where he put his best forces… that he was after Kyiv and he was after the leadership. And he expected a quick victory. That did not happen.”

Incorrect assumptions, Breedlove said, made way for poor logistics and a misallocation of troops. Putin assumed the Russians would see a quick victory. According to Breedlove, he did not plan for Ukraine’s defensive strategy and fierce resistance. “Amateurs talk about operations. Professionals talk about logistics,” he said, referring to the Russian military’s failure to plan for an intense, long-term war.

Logistical failures have significantly impacted the Russians in Ukraine, agreed retired Brig. Gen. Peter Zwack in an interview. Zwack, who served as the U.S. Senior Defense attaché at the Russian Federation from 2012–to 2014, cited the Russian Army’s use of soft-shell vehicles to transport supplies, which leaves them vulnerable to disruption by attack.

“The Russians are bleeding out because they cannot maintain their logistics,” Zwak said. “It’s like a needle pricking the Russian Army over and over again in Ukraine until they bleed out.”

Incorrect logistical assumptions might not be the only Russian miscalculation. Air supremacy in Syria may have led Russian leaders to think the same uncontested skies would greet them in Ukraine. Instead, Ukrainians are disrupting Russian air operations and downing Russian aircraft at low and medium altitudes, said Zwack.

After his 2015 appointment to command Russian troops in Syria, Dvornikov controlled the Syrian skies, flattening the city of Aleppo without regard for civilian infrastructure or lives. A 2017 United Nations report concluded the Russian and Syrian targeting of Aleppo-area medical facilities amounted to war crimes.

Shadi Martini, executive director of Multifaith Alliance for Syrian Refugees and formerly a hospital manager in Aleppo who escaped in 2012, said those remaining in Syria noticed the difference under Dvornikov. “What he brought in was more precise targeting of civilian infrastructure. The Syrian regime would hit civilian structures with no problem but with the Russians it was deliberate. They would deliberately target civilian infrastructure that was meant to help civilians survive. Dvornikov took it to a different level.”

Martini and others observing the conflict noticed a still darker tactic. The Russians, he said, would target first responders.

“They would hit a spot and then wait 10 minutes until rescue started getting there,’’ Martini said. “And then they would hit the spot again.”

Dr. Zaher Sahloul, a Syrian-American doctor and president of MedGlobal, an organization that brings medical assistance to areas in need, called this tactic the “double-tap.” Sahloul volunteered in Aleppo six times between 2012 and 2016. This month, he volunteered in Lviv, Ukraine, helping prepare Ukrainian doctors for mass casualties and potential chemical attacks.

Lviv, a city in Western Ukraine at the far end of Russia’s bombing range, has not witnessed the devastation of cities like Kyiv or Mariupol. Based on Dvornikov’s reputation, many Ukrainians in Lviv and elsewhere are waiting to see if the wanton bombing seen in Syria will reach all corners of their country.

In the months after Festuk left, the Russian and the Syrian bombing campaign in Aleppo only intensified. When she spoke with friends who remained behind, they told her of living without food, water and wanting to die. Though she initially wished to have stayed in Aleppo, these conversations changed her perspective. “Once the Russians and the Syrian [regime] took Aleppo, I thought ‘there is no home anymore. There is no place for me to go.”

Eve Sampson is a U.S. Military Academy graduate and a former Army officer who deployed to Syria in 2018. She is freelancing while pursuing a Masters in Journalism from the University of Maryland.