“We do not provide intelligence on the location of senior military leaders on the battlefield or participate in the targeting decisions of the Ukrainian military." 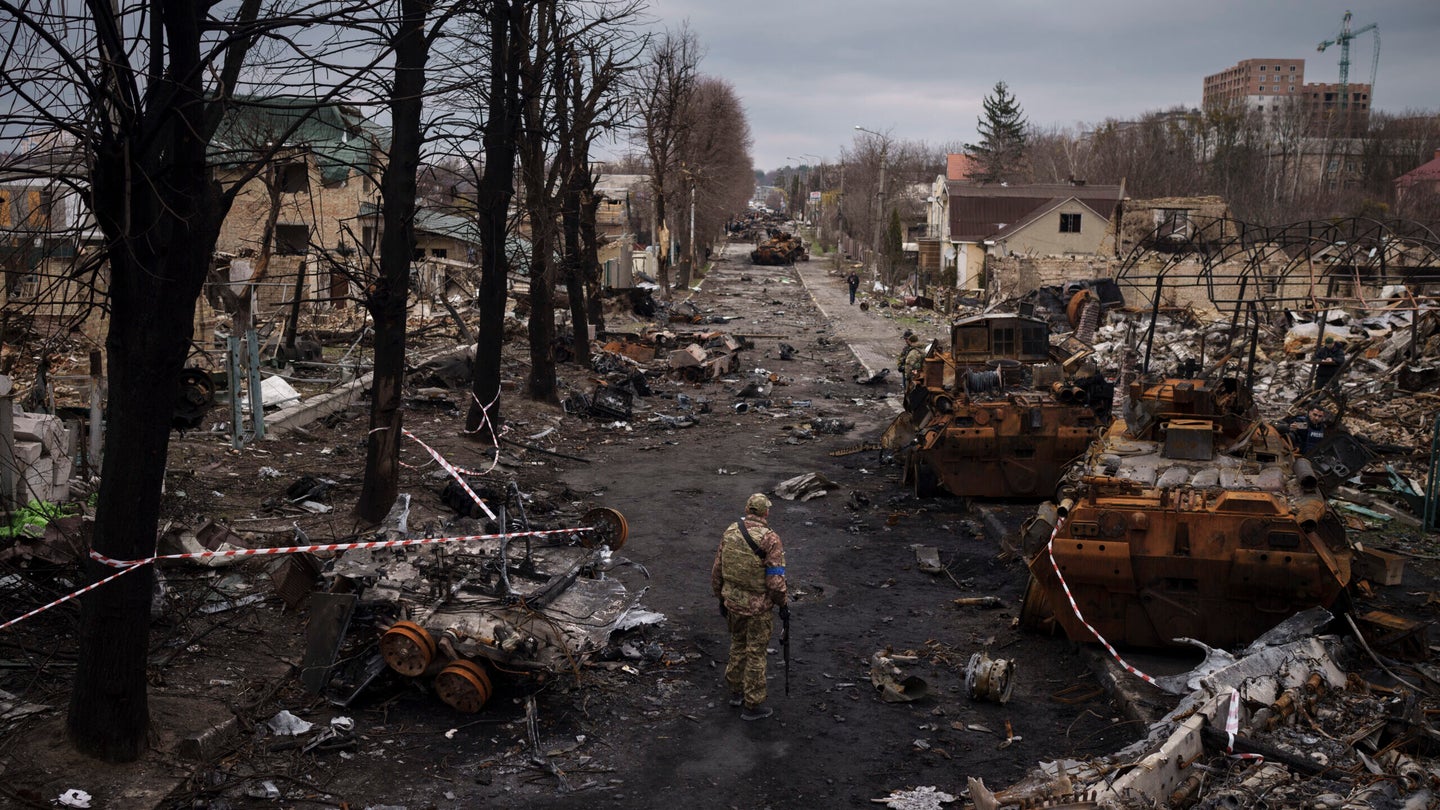 A Ukrainian serviceman walks amid destroyed Russian tanks in Bucha, on the outskirts of Kyiv, Ukraine, on April 6, 2022. (Felipe Dana/AP).
SHARE

By almost all accounts, Russia’s invasion of Ukraine has not been going well. There was the flagship of Russia’s Black Sea Fleet that sank. There have been the countless tanks getting their turrets blown off by the so-called “jack-in-the-box effect.” And then there’s the seemingly high number of Russian generals who have been dying on the front lines. A new report from The New York Times suggests that intelligence shared by the United States with Ukraine may be playing a role in that.

According to the article published on Wednesday, “the United States has focused on providing the location and other details about the Russian military’s mobile headquarters, which relocate frequently.”

It’s part of a “classified effort by the Biden administration to provide real-time battlefield intelligence to Ukraine,” and “includes anticipated Russian troop movements gleaned from recent American assessments of Moscow’s secret battle plan for the fighting in the Donbas region of eastern Ukraine,” reported the New York Times.

However, when asked about the report on Thursday, Pentagon spokesman John Kirby said, “the United States provides battlefield intelligence to help Ukrainians defend their country,” adding that, “We do not provide intelligence on the location of senior military leaders on the battlefield or participate in the targeting decisions of the Ukrainian military.”

Kirby continued, saying “the Ukrainians have, quite frankly, a lot more information than we do. This is their country, their territory, and they have capable intelligence collection abilities of their own. Ukraine combines information that we and other partners provide, with the intelligence that they themselves are gathering on the battlefield – and then they make their own decisions and they take their own actions.”

Likewise, Adrienne Curry, a spokeswoman for the National Security Council, said in a statement to Task & Purpose that, “The United States provides battlefield intelligence to help the Ukrainians defend their country.  We do not provide intelligence with the intent to kill Russian generals.”

Unnamed officials quoted in the article did not specify how many generals had been killed as a result of shared intelligence. According to the New York Times, Ukrainian officials claim to have killed approximately 12 general officers on the front lines of the invasion.

From almost the beginning of the invasion, Russian generals have been dying on the battlefield, often on or very near the front lines.

The high number of fatalities among senior Russian officers may be due, in part, to Russian military doctrine.

As Michael Kofman, director of the Russia Studies program at CNA told Task & Purpose in March, “Russian military leaders are often sent to lead from the front,” adding that “Even senior officers are known to take on a lot of risk.” This is largely attributed to Russia’s lack of junior leadership, which pushes decisions higher and higher up the chain of command, as Task & Purpose previously reported.

Earlier this week, there were reports that Russia’s highest ranking general and chief of the general staff, Valery Gerasimov, had been wounded while visiting the Donbas region of eastern Ukraine. U.S. officials would not confirm his location, but did confirm he was in Donbas. According to the Times, the United States did not provide intelligence to aid in a strike on Gerasimov.

It’s no secret that the United States as well as other countries are sending military aid to Ukraine. That includes more than $350 million in anti-tank weapons and anti-aircraft missiles authorized on Feb. 25. There are also the 90 M777 howitzers being transferred to Ukraine, along with 70,000 artillery rounds and training provided by Florida National Guard and Canadian Army troops.

In the air there have been the Switchblade and the Phoenix Ghost drones, both of which specialize in taking out armored vehicles.

But while Secretary of Defense Lloyd Austin has openly said that he wants to see Russia “weakened to the degree that it can’t do the kinds of things that it has done in invading Ukraine,” the kind of intelligence sharing reported by the New York Times would be unprecedented.

The news that the U.S. is providing intelligence to Ukrainian forces, which has then reportedly been used to target Russia’s military command structure in Ukraine, is just the latest in a long list of challenges facing the invading forces.