"The Russian philosophy is ... you're either going to get to your objective or you're going to die trying." 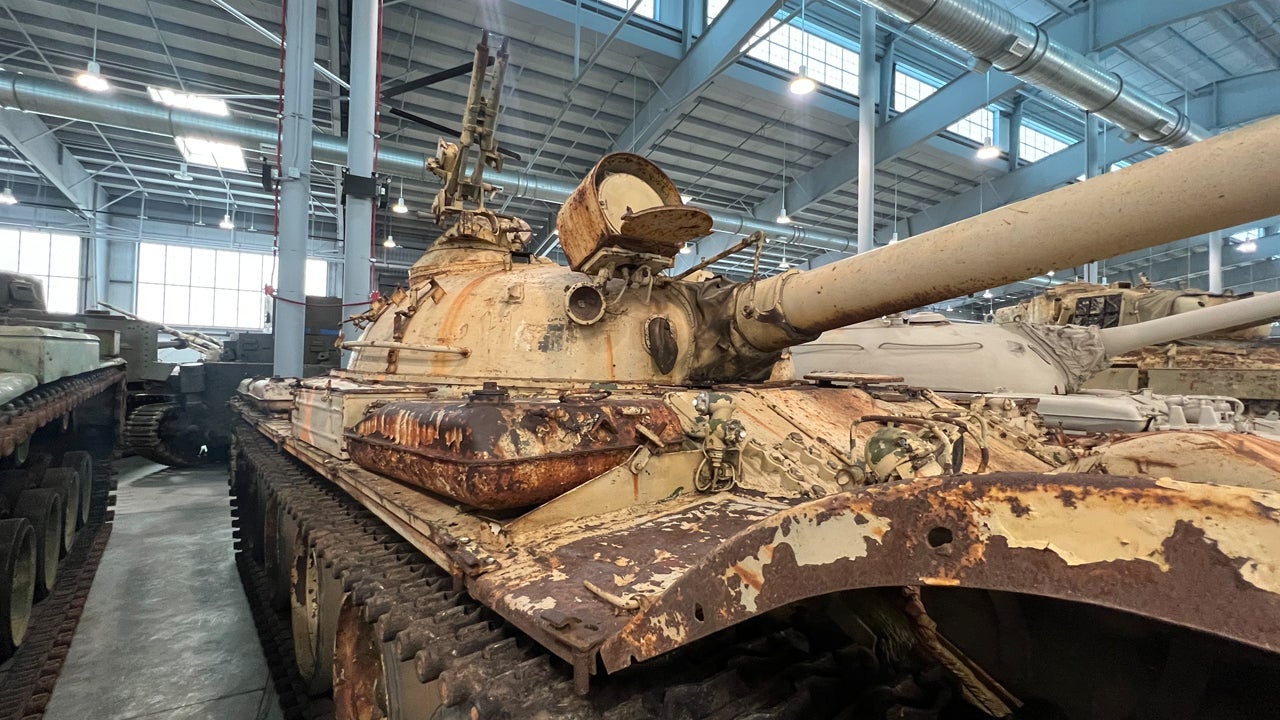 One of the simplest explanations for Russia’s military strategy in Ukraine can be found in a large unassuming warehouse full of tanks.

The U.S. Army Armor and Cavalry Collection at Fort Benning, Georgia, houses tanks from the Army’s first M1 Abrams, all the way back to the oldest armored vehicle in the service’s inventory.

Nestled among the rows of armored behemoths, right next to an American M60 main battle tank, is a Russian T-62 which still looks exactly like it did when it was captured from the Iraqi Army in 1991, according to collection curator Rob Cogan. While a great educational tool for new armor branch soldiers at Fort Benning, the tank also serves as a reminder that history can, and often does, repeat itself.

During a tour of the collection on April 6, Cogan explained that in the past, Soviet doctrine was to focus on the attack, not defense — “the attack is your defense,” he said of their thinking. Stopping for something like refueling was not a priority. Whereas the U.S. military has an intricate logistics network that would ensure everything is getting fuel when it needs it, the Russian military doesn’t exactly think that way, and hasn’t for some time.

“The U.S. Army, we build that into our plan: ‘All right, this is where we’re going to be able to refuel in the middle of the attack, it’s going to work, we lay our advances that way so we’re not vulnerable,’” Cogan said. “The Russian philosophy is, you’re not going to stop, there’s no time for that, you have a time schedule to maintain. So carry as much fuel and as much ammunition as possible, and you’re either going to get to your objective or you’re going to die trying.”

The collection’s T-62 is about the size you’d expect of a tank, not nearly the largest in the warehouse, and splattered with rust with a hole on the front that the curators suspect was a round from a Bradley Fighting Vehicle that “peppered the driver’s periscope with shrapnel,” Cogan said. “That’s probably what caused this vehicle to get abandoned.” In addition to the fuel tanks on the side of the vehicle, Cogan said it also had the ability to carry fuel on the back.

According to Cogan, the Russian tanks in the collection are the “most used” parts of the collection right now as they’re training soldiers, because while the older models may have been upgraded or modernized, they still serve as an example of what they look like and how they operate. As the Army shifts from focusing on counterinsurgency and instead looks towards large-scale combat operations, Cogan said soldiers want to learn about the adversary vehicles they could potentially see in combat, or be used by allied nations.

“They want to know, ‘Hey I could be fighting this, or this could be the vehicle parked on my flank trying to fight with me. I want to know what it’s capable of doing or not doing,’” Cogan said.

One of the interesting features on the T-62 are the large diesel fuel cells attached to the outside of the tank, in addition to the fuel tanks on the inside. More modern tanks like the T-72 still store fuel externally. Steven Zaloga, a Russian and Soviet tank expert and senior analyst at The Teal Group, a defense consulting company, said that while a portion of the fuel is inside the hull, “the entire right-side external pannier is a big, lightly armored fuel cell.”

“Most Russian tanks can carry a pair of supplementary 200-liter fuel drums on the rear of the engine deck,” he told Task & Purpose.

While diesel is much less flammable than gasoline, having them on the outside clearly put them at risk of being punctured, which could be a problem for an army told to go as hard as they can, as far as they can with only what they can carry.

Nevertheless, that philosophy of pushing forward and refusing to stop has essentially remained the same for Russian armor since World War II. While the Germans “had superior equipment and in some cases better-trained troops,” Cogan said, the Soviet Union’s strategy was to “keep applying pressure.” Where Germany might have had better capabilities, the Soviets banked on keeping up the fight by pushing one tank corps after another as a relentless assault on German forces.

The result was the largest tank battle in history, known as the Battle of Kursk. Thousands of tanks were deployed by the Soviet Union and Germany during the battle, which ultimately resulted in Soviet forces stopping the German advance “dead in its tracks.”

Years later, Russia planned to fight the same way in the Cold War by deploying units “in huge waves,” Cogan explained. The plan was to essentially put the least valuable tanks and personnel on the front lines, and gradually increase it in the waves that followed. First, Russia would send forward it’s World War II-era tanks “manned by East German and Czechoslovakian conscripts, literally just as cannon fodder to use up American ammunition,” Cogan said. That would be followed by Russia’s T-62s and T-55s, and then the T-64s and T-72s manned by Russian troops.

“By the time we saw their brand new T-80 … they had already pushed us back,” Cogan said of the war game scenario.

That didn’t happen, but that doesn’t mean the U.S. didn’t have a plan in case it did. According to Cogan, the plan was to disrupt Russian military operations long enough that they’d begin to self-implode from a lack of resources. Sound familiar?

While the conflict in Ukraine is far from over, Russian President Vladimir Putin saw the invasion going much faster and smoother than it has. The military wasn’t logistically prepared for weeks of combat. As a senior defense official said this week, Russia “fully expected to be able to take Kyiv in very short order, and did not factor in fuel, food, spare parts, other sustainment capabilities … and they suffered for that.”

Michael Kofman, the director of the Russia Studies Program at CNA, a national security think tank, told the Washington Post that he suspects Russia did “not properly organize the logistics necessary for an … an actual, serious fight in what is the largest country in Europe outside of Russia.” In turn, the Ukrainians “pretty quickly figured out that the Achilles’ heel on the Russian effort was the logistics.”

Indeed, Cogan said the way the U.S. saw it during the Cold War was you “don’t necessarily have to stop the Russians. You have to just disrupt their timetable. Because if you can slow them down enough their units’ logistics are going to start falling apart.”

“You could argue we’re seeing that happening now in the modern world.”