It's a sticky situation. 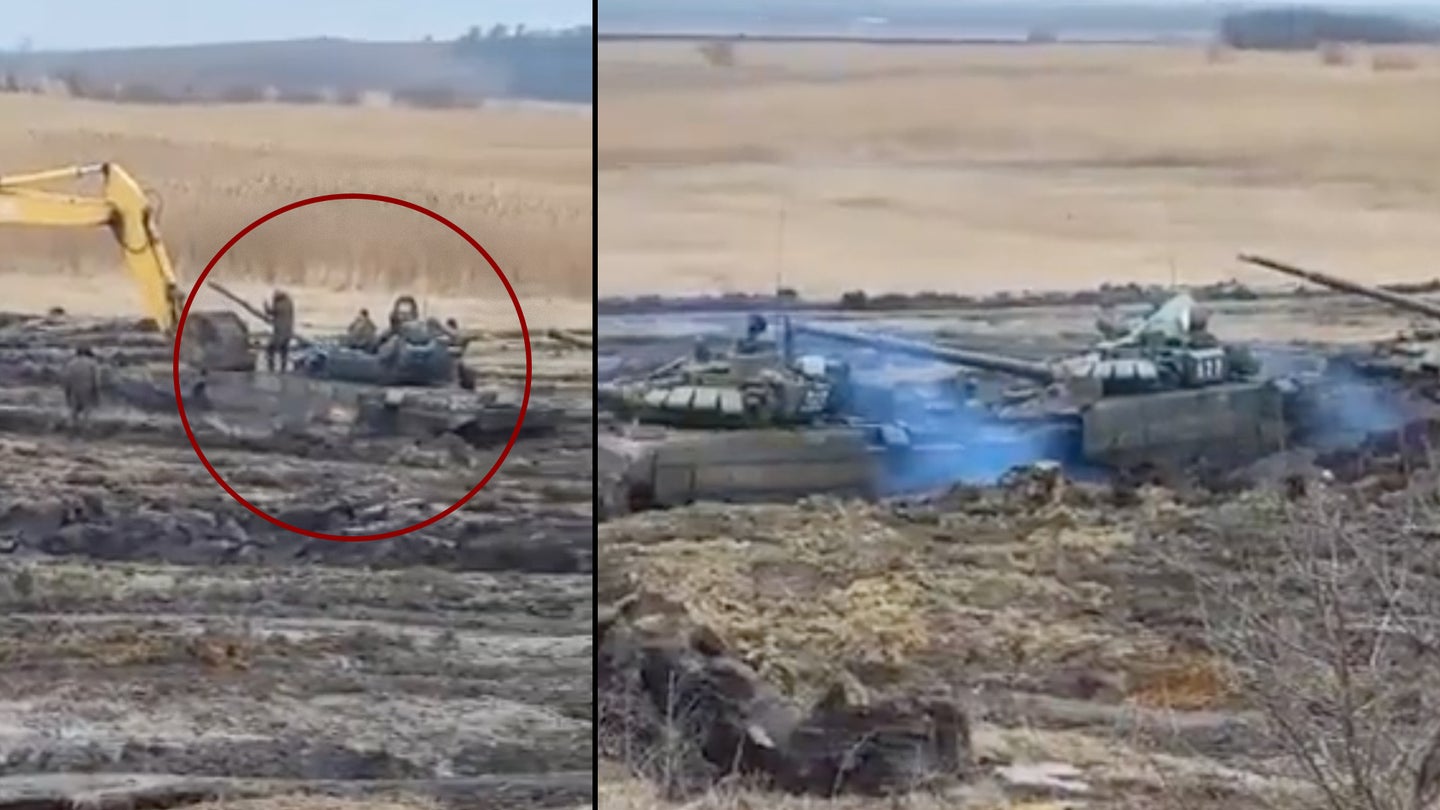 In Eastern Europe, all eyes are on Ukraine, where as many as 130,000 Russian troops are staging near the border for what appears to all outside observers as a potential invasion. The questions of if, when, and how Russia might launch an attack are at the forefront, but Russian forces training near Ukraine are already dealing with the limitations weather may impose.

Over the weekend, footage emerged of Russian tanks defeated by the elements. Posted to Twitter by Liveuamap on Feb. 10, the video shows a formation of tanks ground to a halt and stuck in the mud. A lone excavator is deployed trying to dig them out. The video was reportedly taken at a military range in the Rostov region of Russia, near the southeastern border with Ukraine.

In trying to forecast a possible Russian invasion of Ukraine, the conditions on the ground have been one indicator people have looked to. Mud is an obvious inhibitor of maneuver warfare, preventing armored vehicles from rapidly advancing across terrain. It might even swallow up an entire tank. And in the spring, with the ground thawing out, much of Ukraine will be in what Russians call “Rasputitsa,” meaning: the time without roads. The kind of conditions that have hindered warfare since the time of Napoleon. Mud everywhere.

“The Ukrainian mud in spring has to be seen to be believed,” said one British journalist during the Soviet offensive across Ukraine in 1944. “The whole country is swamped, and the roads are like rivers of mud, often two-feet deep.”

That leaves some observers stating that if an invasion does happen, it will happen very soon, in the small window of time remaining before the ground of central Ukraine is too mucked up to effectively maneuver in.

U.S. President Joe Biden appears to have considered this, saying in January that Russian President Vladimir Putin is “going to have to wait a little bit until the ground is frozen so he can cross.”

But how much the mud will matter remains debatable. For all the 21st century advances in military technology, a tank still has to be able to operate in open country.

Russian tanks, such as those seen in the leaked video, are lighter than their American and NATO counterparts, designed specifically to operate in the conditions currently seen in Ukraine. A Russian T-90 main battle tank weighs 46 tons. By comparison, the U.S. Army’s  M1 Abrams tank weighs 54 tons, and a German Leopard 2A6 weighs 62 tons.

“The Russian military trains in all types of weather—their training cycles extend all year round, so they do have some familiarity with shifting ground conditions,” said Dara Massicot, a senior policy researcher with the Rand Corporation, who specializes in Russian defense matters.

As one Russian military analyst recently bragged, “A thaw can only stop Western tanks.”

That same equipment, based on multiple generations of designs built to operate year-round in Europe, is what is also equipping a great deal of Ukraine’s military forces.

So while mud once again rears its head as an evergreen concern for military campaigns, it’s going up against a factor that people who have served in the military from time immemorial are familiar with: “Get it done.”

In other words, the mud is a constraint but not a deterrent.

The video posted does offer a look, however, at the kind of conditions tanks and their crews might find themselves fighting through in the coming weeks.