"A majority of Russians continue to say the collapse of the Soviet Union has been a bad thing for their country." 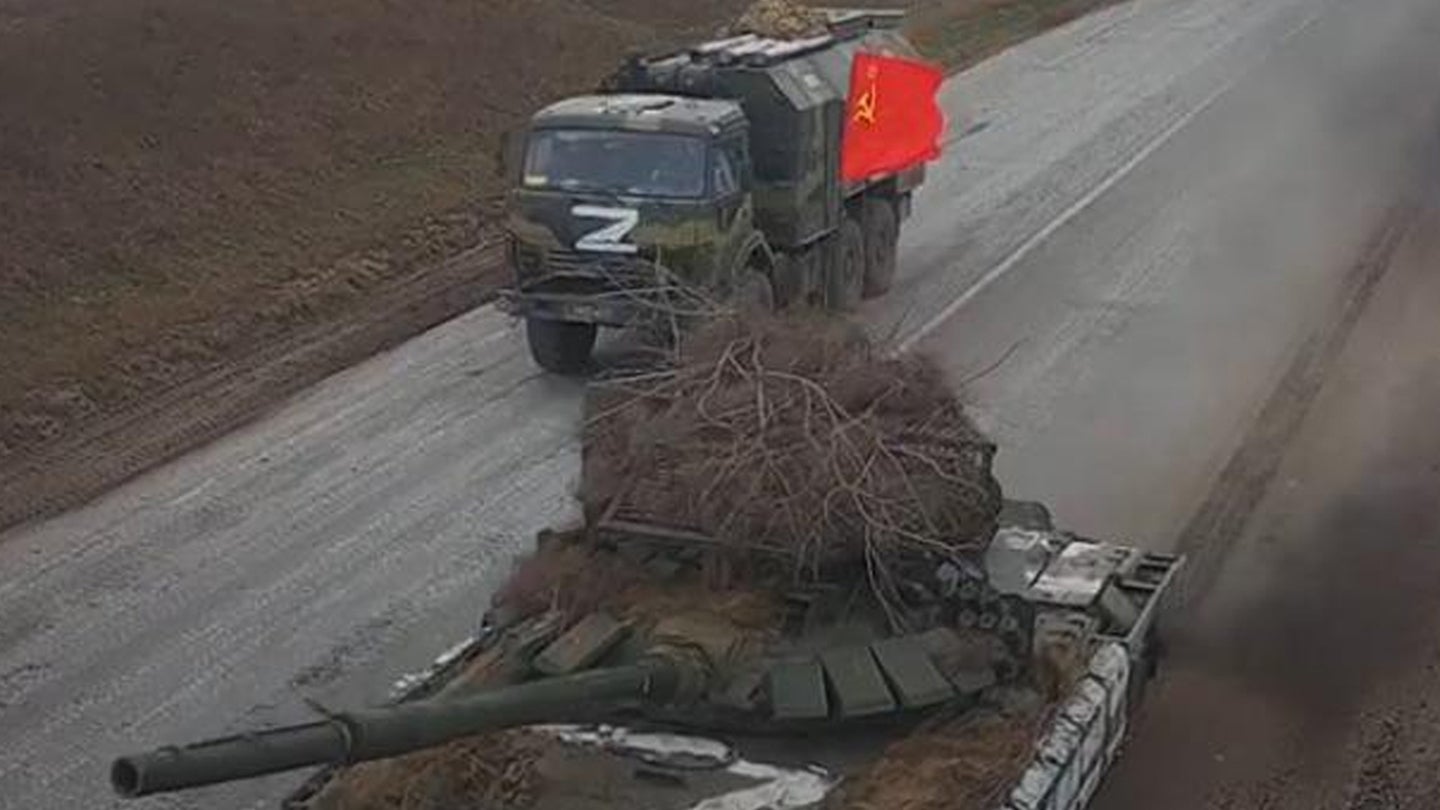 The past seems to be present as new footage posted to social media appears to show a Russian armored personnel carrier flying the red banner of the Soviet Union during the invasion of Ukraine.

The minute-long video, attributed to Russia’s Ministry of Defense, shows a column of tanks, armored personnel carriers, mobile missile launchers, and jeeps moving on a rural road in Ukraine. One BMP-2, an infantry fighting vehicle, seen early in the clip flies the scarlet red banner of the Soviet Union, the continent-spanning state that collapsed under political and economic unrest in 1991 and gave way to the modern-day Russian Federation.

Other photos shared on Twitter also appear to show a Russian tank and armored personnel carrier flying the Soviet flag in Ukraine.

Though the Soviet Union is known in the U.S. for its harsh authoritarian regime, human rights violations, and poor economic conditions, there is a wave of nostalgia among many Russians for the global power of the old empire.

“A majority of Russians continue to say the collapse of the Soviet Union has been a bad thing for their country,” wrote the Pew Research Center in a 2017 analysis.

Some of that nostalgia may stem from “current frustration over social policy and economic hardship,” wrote the BBC in 2019. The BBC interviewed sociologist Karina Pipiya, who found that the nostalgia extended not only towards the Soviet Union but also to one of its most infamous leaders, Joseph Stalin.

“Stalin is seen as the main figure who defeated fascism, who gets the honors for victory in the Great Patriotic War,” Pipiya told the BBC, referring to the phrase many Russians use to refer to their fight against Nazi Germany during World War II. “And that war victory is a symbol of national pride for all Russians, even for those born in the post-Soviet period.”

Like other aspects of the Soviet Union, Stalin is not a beloved figure in the U.S. and much of Europe, where he is best remembered for instigating wide-scale human rights violations such as genocide, mass executions, and famines. But as Pipiya pointed out, in Russia, he is remembered for defeating Nazi Germany and laying the foundation for the colossus of the Soviet Union to rival the United States as a superpower. That perception is particularly strong among young Russians from age 18 to 30, Pipiya noted.

“Their perception of Stalin is based on myth, fed by older generations,” she told the BBC.

The nostalgia for the USSR also comes amid a surge in patriotism among some Russians, who have taken to sporting “Zs” in reference to the white markings that dotted Russian military vehicles at the outset of the invasion of Ukraine.

“It is not a surprising development in light of Moscow’s intense propaganda effort to justify the war and generate support for it among Russia’s citizens,” Ian Brzezinski, former deputy assistant secretary of defense for Europe and NATO policy, told Task & Purpose. “Symbols have a power of their own and Moscow’s propagandists surely recognize this.”

Perhaps the most important Russian citizen to buy into, and promote, the nostalgia of the Soviet Union is the one leading the country: President Vladimir Putin. A former agent of the KGB, the Soviet spy agency, Putin said in 2005 that the collapse of the Soviet Union was “the greatest geopolitical catastrophe of the century” which is a strong statement considering the 20th century also hosted World War II and many other bloody nightmares. Putin has repeatedly used the past to try to enforce his present claim to power, noted journalist Shaun Walker in a profile of the president for History.com.

“Putin’s use of the Second World War has been augmented with other, secondary historical figures and victories, as Putin has tried to weave a narrative of Russian glory, starting with the 10th-century Prince Vladimir, founder of Kievan Rus—and ending with the Vladimir currently residing inside the Kremlin,” Walker wrote.

Today, some of the old empire seems to be coming back in the form of a scarlet banner flying into a former satellite state of the Soviet Union. How long it will remain there, and whether it will appear over other nearby countries in the near future, remains to be seen.