"Symbols have a power of their own and Moscow’s propagandists surely recognize this." 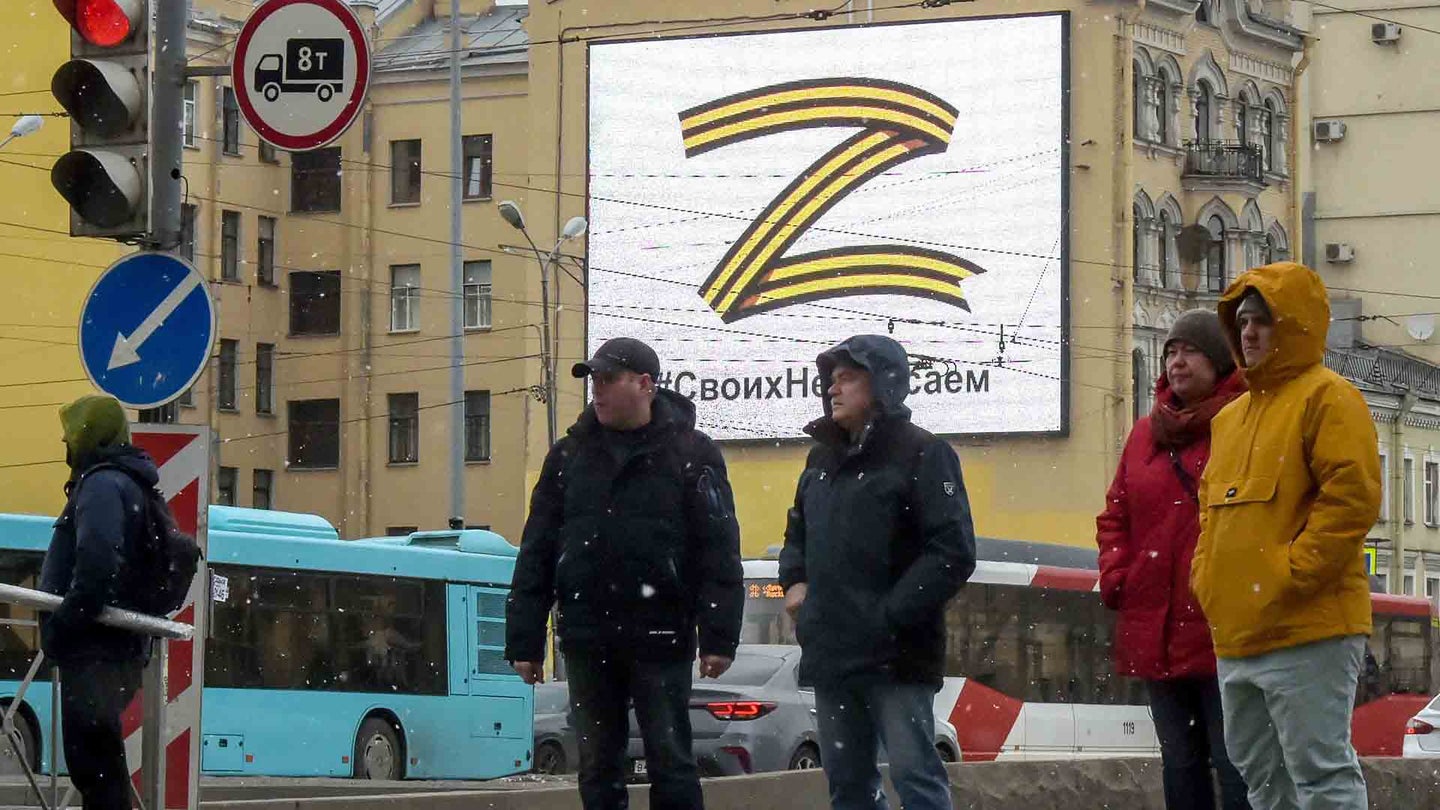 Pedestrians cross a street in front of a billboard displaying the symbol "Z" in the colors of the ribbon of Saint George and a slogan reading: "We don't give up on our people", in support of the Russian armed forces, in Saint Petersburg, on March 7, 2022. (Photo by AFP via Getty Images).
SHARE

The mysterious “Z” markings that first appeared on Russian military vehicles — before they invaded Ukraine, a sovereign nation — have gone mainstream as a way for Russians at home to show solidarity with their troops and government.

“It is not a surprising development in light of Moscow’s intense propaganda effort to justify the war and generate support for it among Russia’s citizens,” Ian Brzezinski, former deputy assistant secretary of defense for Europe and NATO policy, told Task & Purpose. “Symbols have a power of their own and Moscow’s propagandists surely recognize this.”

Starting in late February, pictures and videos of Russian tanks and other military equipment with white “Z’s” painted on them began to emerge on social media. Military experts told Task & Purpose at the time that the markings could be a way for the Russians to distinguish friend from foe, or the “Z’s” and other symbols painted on Russian equipment could signify which units they are attached to.

On March 6, Russia’s defense ministry claimed that the symbols stood for “Za pobedu” — “For victory,” the New York Times reported. Task & Purpose was unable to independently verify this explanation. It should also be noted that Russian officials are making all kinds of claims as part of their propaganda offensive, such as accusing the U.S. Defense Department of funding biological weapons laboratories in Ukraine. (A senior defense official told reporters on Wednesday those allegations are “absurd” as well as “laughable” and “untrue.”)

Regardless of the questionable veracity of the Russian defense ministry’s claim, the Russian people have begun conspicuously displaying the Latin letter “Z,” which does not exist in the Cyrillic alphabet, as their way to remember everyone who is deployed.

A Russian gymnast got into trouble for using tape to make a “Z” on his uniform while standing next to a Ukrainian athlete at an event in Qatar. Maria Butina, a former Russian spy who was deported from the United States, has made a YouTube video showing her painting a white “Z” on her jacket lapel and then saying: “Do your work, brothers We will always support you,” according to the New York Times.

Russian civilians have displayed the “Z” symbol on their vehicles, including those that took part in a convoy to show solidarity with Russian forces fighting in Ukraine. Children being treated for cancer at one Russian hospital were told to line up in a “Z” formation for a picture that has been shared on social media, Yahoo! News reported.

Nora Bensahel, a visiting professor of strategic studies at the Johns Hopkins School of Advanced International Studies, said she too is not surprised to see the “Z” become a symbol of support for Russia’s war effort.

“I suspect that comes from a combination of spontaneous support from those who support the invasion, and the Russian government encouraging it to spread,” Bensahel told Task & Purpose.

While it is impossible to determine how much of the “Z” symbology has been organized by the Kremlin for propaganda purposes, most Russians are being spoon-fed official talking points by state-run media while independent news outlets have been forced to flee the country. Russian President Vladimir Putin has justified the invasion of Ukraine as an effort to “pursue the demilitarization and denazification” of the country.

By claiming that Ukraine is run by Nazis, Putin is playing to the Russian people’s rawest emotions. Russians still refer to World War II as “The Great Patriotic War,” a term that was first coined shortly after Nazi Germany invaded the Soviet Union in 1941. Nearly 30 million people across the former Soviet Union died over the next four years — the Nazi occupation of Ukraine was particularly brutal. Russians commemorate the Soviet victory over Germany every May 9 with a “Victory Day” parade, which is part national holiday and part religious experience.

So, it is likely that many Russians believe their government’s official stance on the Ukraine invasion and are displaying “Z’s” as an earnest show of support for their troops. But Alexey Kovalyov, the investigations editor for the independent Russian media outlet Meduza, has warned that his countrymen will eventually realize that they have been duped.

“The reckoning for millions of Russians is inevitable and it will be extremely painful,” he tweeted on Sunday. “For generations we will be a defeated nation which repeatedly ignored its opportunities to avert the atrocities committed in its name.”