"I know you're in a silly goofy mood but please don't start ww3." 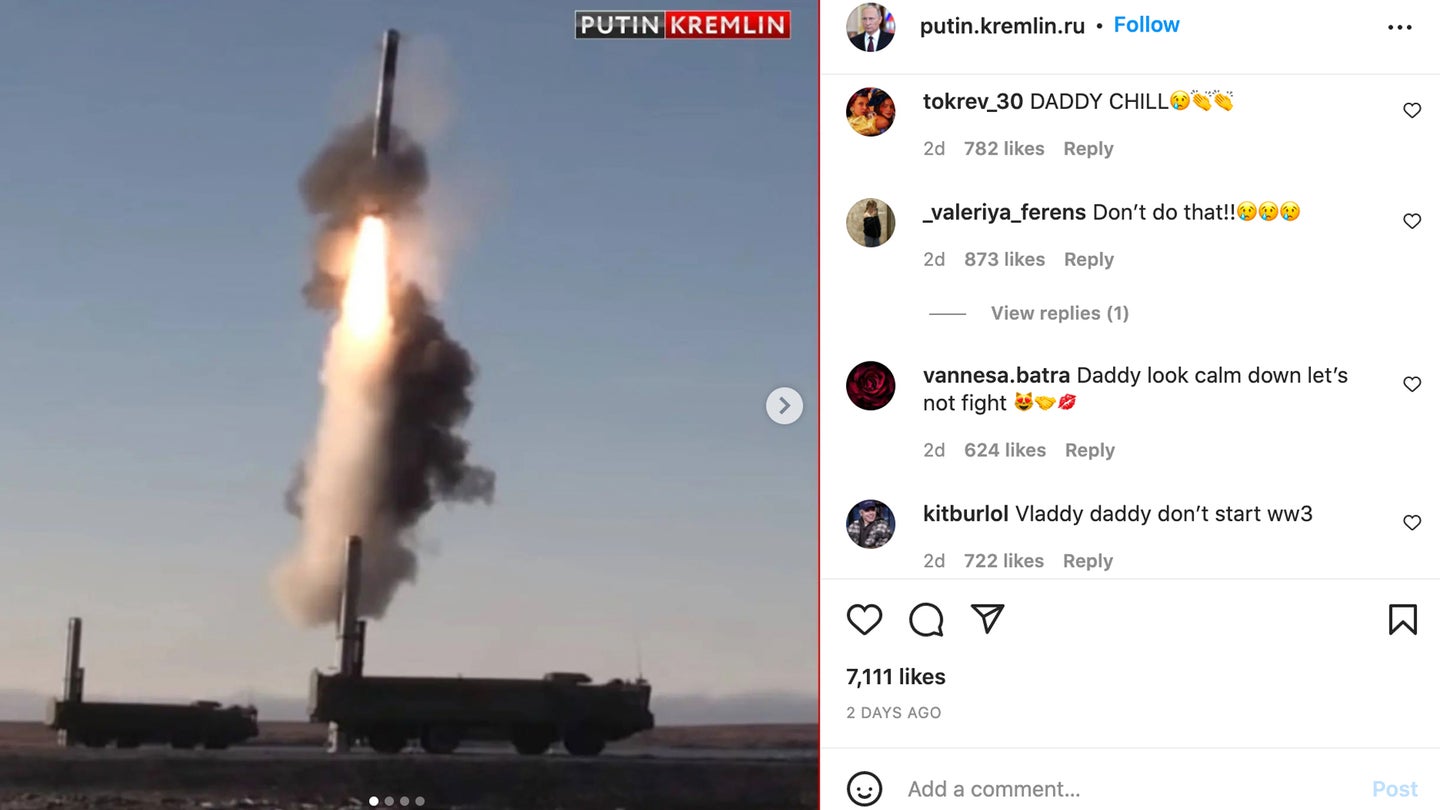 As tensions rise in Europe and the United States prepares to send troops to support Ukraine against Russia, Generation Z has taken on another approach — simply asking Russian President Vladimir Putin to “please consider to just not start the war.”

An unverified Instagram account for Putin has been flooded with comments, apparently from Gen Z users born between 1997 and 2012, saying that World War III is “not the vibe,” and offering an exchange of “5 mcnuggets to stop the war.”

“Vlad Daddy we are in Mercury Retrograde!” one person commented. “Not a good time to start a war! I suggest an art project instead!”

“You not you when you hungry,” said another, apparently taking pointers from a Snickers advertisement campaign.

The U.S. and its NATO allies have been mulling what comes next as Russia has bulked up its military presence on the border of Ukraine. Russia’s movements have been a “consistent and steady pace involving tens of thousands of Russian troops,” Defense Secretary Lloyd Austin said on Friday, and are supported by increased Russian naval activity in the northern Atlantic and the Mediterranean Sea.”

The Pentagon confirmed that 8,500 service members in the U.S. were on heightened alert for a possible deployment to Europe in support of NATO allies, including the 82nd Airborne Division which makes up the Immediate Response Force.

“[T]he United States will stand shoulder to shoulder with our NATO allies,” Austin said on Friday. “That includes reinforcing security on NATO’s Eastern Flank, and as you know, we’ve placed thousands of U.S. troops on prepare-to-deploy orders earlier this week. If NATO activates its response forces, these troops will be ready to go.”

Austin also said, however, that he doesn’t believe Putin has made any “final decisions … to conduct any sort of offensive operation,” and that there is “still room for a diplomatic outcome.”

As the situation has evolved over the last few weeks, social media app TikTok has been at the center. It has started being used by “professional analysts and amateur sleuths … in an attempt to gain insight into the Kremlin’s plans,” NBC News reported. TikTok “is overflowing with hundreds of videos recording military might as it heads to the Ukrainian border,” The Daily Telegraph reported, adding that Ukraine “may be the first TikTok conflict.”

Although the outcome of a possible Russian invasion of Ukraine is unknown at least one thing is certain: Gen Z will continue asking “Vladdy daddy” to reconsider.