Murder hornets look like something out of Satan’s worst acid trip. 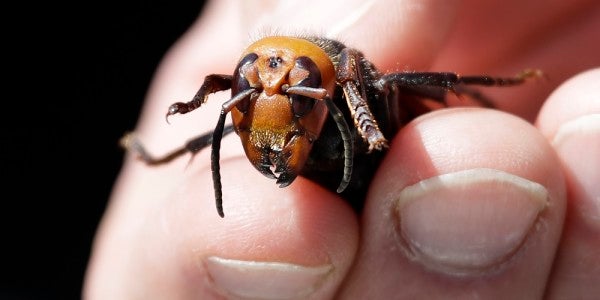 Beloved readers: It is without the slightest hint of hyperbole or exaggeration that your humble reporter argues in favor of the U.S. military immediately using low-yield tactical nuclear weapons to destroy the “murder hornets” that have arrived on American soil.

Have you seen a picture of these things? The freakishly large hornets are known to decapitate innocent honey bees for fun. Their stingers are long and sharp and hundreds of the fiendish-looking creatures have reportedly been spotted in Washington state since December.

To your friend and humble narrator, who is generally terrified of all insects that can sting, the murder hornets look like something out of Satan’s worst acid trip. Had killing the firstborn child in every Egyptian home not worked, God would have surely sent the murder hornets to Egypt as the 11th plague.

For that reason, this reporter took it upon himself to ask the Pentagon if the U.S. military has been tasked with eradicating the murder hornet menace.

Perhaps predictably, defense officials did not share your humble narrator’s enthusiasm for wiping out the stinging scourge – probably because the National Defense Strategy fails to properly identify murder hornets as either competitors or rivals.

“While we at DOD are aware of the existence of the vespa mandarinia in the Pacific Northwest, we’re not sure whether it lives up to its billing as a ‘murder hornet,’” a defense official told Task & Purpose. “Murder’s a pretty strong term to level at an entire species, as it implies intent, which must be proven in a court of law.”

“Regardless, we are monitoring the situation and will remain vigilant,” the official continued. “If forced to confront this winged enemy, we will engage it under cover of darkness. Early intelligence indicates the species is fairly passive at night, which is when the U.S. military is at its best.”

So, the DOD is standing by in case it is needed to fight tonight against the devil’s insects, but the Ohio-based company Throwflame has already seen a slight uptick in sales of flamethrowers since stories about the murder hornets first appeared, said Quinn Whitehead, the company’s CEO.

“It’s hard to correlate these things, but we’ve seen an uptick in our traditional backpack-style flamethrowers, but we’ve gotten a lot of interest and recommendations on our drone flamethrower platform,” Whitehead told Task & Purpose.

You heard that correctly: Whitehead’s company sells the TF-19 Wasp flamethrower drone to get those hard-to-reach places. A few people have commented on a YouTube video showcasing the drone that it could come in handy against the murder hornets.

Now, some of you may think that deploying squadrons of flame-throwing drones against overgrown yellow jackets might be a little extreme. To that, I say: We don’t need no water. Let the mother****er burn. Burn mother****er, burn.

With all of that said, your friend and humble narrator would be remiss if he did not mention that the hype around the murder hornet invasion could be slightly overblown. Actual scientists do not believe that murder hornets pose any more of a threat to people than regular bees.

“Your neighbor’s dog is probably more dangerous,” said Lynn Kimsey, an entomology professor at the University of California, Davis. “They are not aggressive. If you mess with a nest, you might get stung, but then that would happen with anything like honey bees or yellow jackets. It’s a big animal so, yeah, it can give you more venom, but pound-for-pound, honey bee stings are the worst.”

Kimsey, who is also director of the Bohart Museum of Entomology, advised this reporter to “take a deep breath,” noting that there’s a chance the murder hornets on the West Coast may have already died.

Murder hornet colonies typically die each year, especially in colder climates, so it would take some time for them to really gain a foothold in the United States, she said. The real species to worry about is the gypsy moth, which could destroy forests in western states, Kimsey said.

Coming next week: Finding a way to deter gypsy moths in an era of renewed great power competition.