‘Sweat, piss and hate’ — What it smells like to carry hundreds of troops in an Air Force C-17

"The Army can be very messy passengers, think toddlers hopped up on energy drinks." 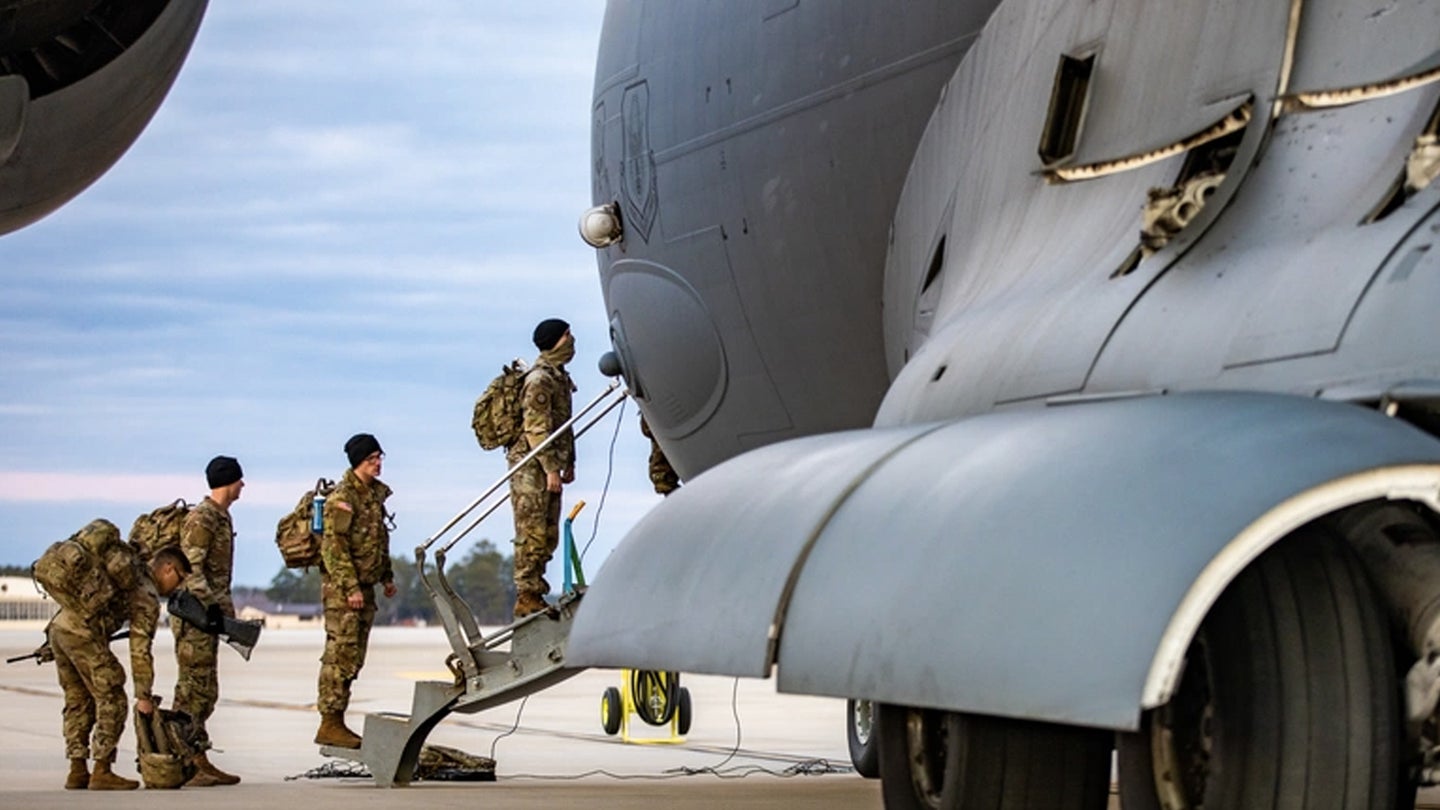 Over the past few weeks, the U.S. military flexed its rapid deployment capabilities by flying thousands of U.S. service members and their equipment to Europe aboard Air Force C-17 cargo jets in response to the Russian troop build-up around, and invasion of, Ukraine. But amid all the headlines, one key element of transporting hundreds of humans over an ocean in a metal can is sometimes lost: it stinks.

“It smells like sweat, piss and hate. The bathrooms get really really gross on ocean crossings,” said one C-17 pilot when asked what the jet smells like after carrying paratroopers over the ocean, as the Air Force did recently for soldiers from the 82nd Airborne Division.

“Hate is indescribable,” the pilot added, “but you know it when you smell it.”

Another C-17 pilot had a similar view of carrying soldiers. Compared to the other services, the Army is by far the most messy, he said.

“The Army can be very messy passengers, think toddlers hopped up on energy drinks,” said the second pilot, also on the condition of anonymity. “The Army has a bad habit of spitting their dip out on the cargo floor, leaving their trash everywhere and taking a piss in places other than the lavatory.”

You might be surprised which branch has a rep for being the cleanest passengers.

“Marines are usually the best passengers, they clean up their stuff and behave themselves,” the pilot said. “Navy is a mixed bag. One time a Navy commander asked about coffee service and inflight beverages. She was 100% serious.”

To the Navy commander’s surprise, Air Force C-17s are not built for creature comforts such as peanuts and in-flight movies. In fact, the aircraft has only one bathroom which starts to stink by the end of a long flight.

“Even if just carrying like 30 to 40 people on a long flight the bathroom gets rank,” said one C-17 loadmaster, a member of the aircrew who is in charge of getting cargo and passengers on and off the aircraft. The cargo could involve anything from humanitarian supplies to main battle tanks. Also called “the Moose,” the C-17 made headlines in August when it played a key role evacuating 120,000 Americans, Afghans and other allies out of Kabul, Afghanistan as the U.S. ended its involvement in that country. In one flight, a C-17 lifted a record 823 people out of Kabul. It was the largest non-combatant evacuation in U.S. military history, and Moose crews drove themselves hard to get it done.

“Yeah, the C-17 community is burned out, never been ran this hard,” said one pilot who spoke on the condition of anonymity at the time. “Jets broken everywhere. But we got a lot of folks out. Hopefully, they can find better lives in the U.S. Maybe the silver lining to this whole thing.”

If the situation in Ukraine deteriorates, the Moose may be faced with a similar challenge. Except instead of pulling people out of danger, they would likely be delivering U.S. troops into harm’s way. On Tuesday, the U.S. military announced it was moving 800 service members in an infantry battalion task force; F-35 Joint Strike Fighters; and 20 Apache attack helicopters already stationed in Europe to Estonia, Latvia and Lithuania. Those troop movements are the latest in a series that have moved 4,700 paratroopers from the 82nd Airborne Division to Poland and 300 soldiers with the 18th Airborne Corps to Germany over the past several weeks.

President Joe Biden stressed on Tuesday that the deployment of U.S. forces to the Baltic states and Poland is “a defensive move on our part” and the United States has “no intention of fighting Russia.” The night prior,  a contingent of Russian troops invaded eastern Ukraine after Russian President Vladimir Putin recognized the independence of two breakaway provinces: Donetsk and Luhansk. Up to 190,000 Russian troops have surrounded Ukraine, including Russian forces that have deployed to Belarus, nominally for military exercises. Whatever happens next, it’s likely that the Moose will be involved.

“C-17s are always in the mix,” said the second pilot. “Globemasters are the lifeline of embassies and bases around the world. With the shifting dynamics of the Ukraine crisis, it’s difficult to say which mission the C-17s will take on, but they will be in the fight.”

And when they do, the crews will pull long hours not only in the sun, snow, rain or darkness, but also in the stink of humans on a diet of Meals Ready to Eat. But sometimes there are ways to avoid the worst of the smells. For example, C-17s and C-130 cargo planes can carry Air Transportable Galley / Lavatory Systems, also called a “comfort pallet,” a kitchen/bathroom combo unit that can roll on and off the aircraft.

“Flying in style on a C-17 with a comfort pallet is the move,” said one aircrew member. “No smell, hot meals, and two toilets!”

Aircrew on the C-130 Hercules may have it even worse than C-17 crews. At least when a C-17 is fully loaded, there are still aisles down which you can move through the aircraft to get to the lavatory. But a C-130 “gets cramped quick, and when you add cargo pallets to the seats, it’s a pain to squeeze by everyone to get to the toilet,” the aircrew member said.

“When carrying paratroopers you’re literally walking on seated troops to get from the front of the aircraft to the back where the toilet is,” he added.

Like many things in the military, going to the bathroom is an example of herd behavior. Once one person goes “number two” on a C-130, everyone else follows and “the aircraft will quickly start to smell like a porta-shitter,” the aircrew member said.

“Thankfully on the J-Model they have a blue toilet so that helps cut down on the smell,” he added. “But it doesn’t quite get rid of it.”

So next time you hear about more troops being deployed to a faraway land, pour one out for the stinky voyage they had to endure to get there.