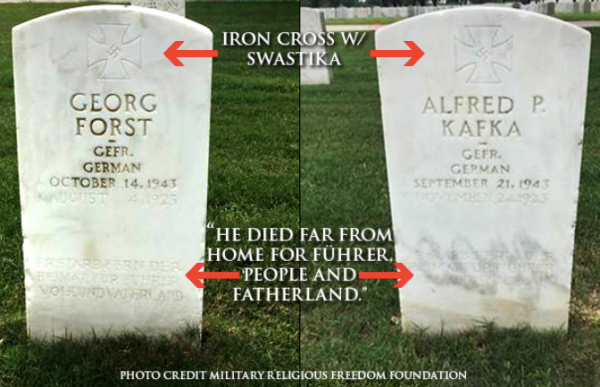 The announcement reverses course from the secretary’s earlier push to keep the headstones, which mark the graves of German prisoners of war who died in the U.S. during World War II.

Wilkie’s previous decision was met with outrage by lawmakers in Congress, who said the headstones were an insult to the American veterans buried alongside them, some of whom died fighting Nazis themselves.

“Allowing these gravestones with symbols and messages of hatred, racism, intolerance, and genocide is especially offensive to all the veterans who risked, and often lost, their lives defending this country and our way of life,” wrote a group of House Representatives in a letter to Wilkie on May 25.

The headstones, which are located at the Fort Sam Houston National cemetery in Texas, and Fort Douglas Post Cemetery in Utah, feature iron crosses with swastikas on them, two of which are engraved with a message referencing Adolf Hitler: “He died far from his home for the Führer, people and fatherland.”

When questioned about the headstones, Wilkie initially dug his heels in, saying that the headstones are historical monuments which should not be erased.

“I happen to think that making sure that when people visit our cemeteries, they are educated and informed of the horror, is an incredibly important thing to do,” Wilkie said before a House Committee on Appropriations hearing last week. “Erasing these headstones removes them from memory, and as we continue to study the Holocaust, the last thing any Holocaust scholar wants to do is erase that memory, I think we can find a way to put this in historical context. That is my view.”

Wilkie cited the National Historic Preservation Act of 1966 as justification for VA to keep the headstones in place, an argument that Rep. Debbie Wasserman Schultz, (D-Fla.) rejected.

“In fact, what the Historic Preservation Act refers to as historic resources are defined as sites worthy of inclusion on a national register of historic places, and in case you were wondering, the national register of criteria generally does not consider individual grave sites eligible except in case of 'historical figures of national importance,'” said Schultz. “Certainly German soldiers who took up arms against the United States do not meet this criteria.”

Wilkie’s statement on Monday suggest that the congresswoman’s words hit their mark, though based on the words Wilkie chose, the secretary still seems to think his logic was sound.

“Americans must always remember the horror of the Nazi regime and why so many Americans sacrificed so much to free the world from its reign of terror,” he said. “It is understandably upsetting to our Veterans and their families to see Nazi inscriptions near those who gave their lives for this nation. That’s why VA will initiate the process required to replace these POW headstones.”

Though it’s not clear exactly when the headstones will be removed, Wilkie said that the VA would later this month begin talking with stakeholders “about how to replace these headstones with historically accurate markers that do not include the Nazi swastika and German text.”

Once the headstones are replaced, VA hopes to preserve them in its National Cemetery Administration History Collection, according to Wilkie's statement. VA will also install interpretive signs at all VA national cemeteries where foreign enemy prisoners of war are interred to provide historical context about how non-U.S. service members from World War I and World War II were interred and buried on American soil, the statement added.

How could this situation arise in the first place, you ask? According to Wilkie’s statement, the cemeteries were under the control of the Army when the German interments occurred in the 1940s. VA’s National Cemetery Administration inherited the cemeteries in 1973 and 2019, respectively. So maybe the Army thought marking the headstones with blatant Nazi tributes was worthwhile, and the VA inherited that decision.

The Military Religious Freedom Foundation first drew attention to the headstones in May, and MRFF director Mikey Weinstein was happy to hear about the VA’s change of heart.