The story of the memorial and its statues is one of raging controversy not unlike the current debate over racial injustice and Confederate monuments. 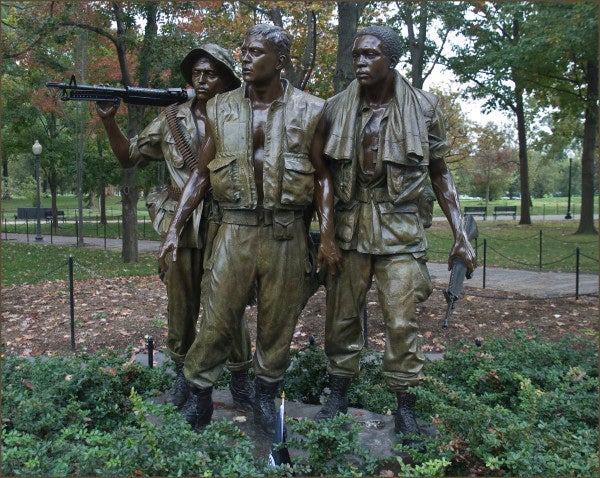 It was a quiet day in 1984 when a statue of an African-American was placed on the National Mall in the shadow of the Lincoln Memorial. He carried an M-16 rifle and stared stoically at the Vietnam Veterans Memorial — perhaps to see if his name would be engraved there. Beside him stood two other soldiers, seemingly walking out of the wood line. The statue is confronted by a sea of names, with each bronze figure touching one another for support. They are a band of brothers.

The Vietnam Veterans Memorial has been a place of healing for nearly 40 years. Millions have come to see this special place, which is now a major tourist attraction.

But the story of the memorial and its statues is one of raging controversy not unlike the current debate over racial injustice and Confederate monuments. Before it was built, what became colloquially known as “The Wall” was attacked in the media, and criticized in 1981 by prominent veterans like Sen.Jeremiah Denton (R-Ala.) and businessman H Ross Perot. Many were determined to force a new design for the Memorial. For months, powerful Americans and Congress debated its chevron shape. The debate was angry, and included accusations that the American Communist Party may have been involved in the design selection.

The design by a 21 year-old Asian-American was modernistic and untraditional. The debate had racial elements, including jabs at her Asian ancestry. A powerful question was “Why are all other Memorials white, but this one is Black, the color of shame and sorrow?” Some Black Vietnam Veterans were offended. After all, tuxedos and limos are black. A book by James Reston, Jr. — A Rift in the Earth — detailed the madness of this debate.

A compromise was made in January 1982. I agreed to add a statue to the Vietnam Veterans Memorial, placing a traditional element near the untraditional design by Maya Lin. A committee was assembled to find a sculptor. Their choice, Frederick Hart, won third place in the original design competition. After diligent work Hart decided that he needed three statues to enhance and give context to the Memorial experience for visitors.

It was obvious to me that if there were going to be three people, one of them had to be African-American. I recognized at the time that this was a somewhat historic decision. After all, how many black people had their statues on the Mall? Frederick Douglass or Harriet Tubman? Not really. It wouldn’t be until 2011 when the Reverend Martin Luther King would finally have this honor.

In 1993 there was another African-American statue at the Vietnam Women’s Memorial. Three women are working to aid a dying American soldier at this moving Memorial. As with the statue of three soldiers overlooking the wall, I made sure there was no reluctance to integrate an African-American.

Our nation has struggled with racial issues since its inception as a British colony. Recent events have seen statues of Confederate soldiers being toppled and removed from public places. The Confederate flag seems on its last breath with Nascar waving goodbye. And places like Fort Hood will eventually be renamed.

An African-American soldier was on duty, facing the wall, where he had been since 1984.

Related: 10 Incredible Photos Of The Heroes Who Fought The Vietnam War