10 Incredible Photos Of The Heroes Who Fought The Vietnam War

When the last of America’s troops left Vietnam on March 29, 1973, their return home brought a defining and divisive... 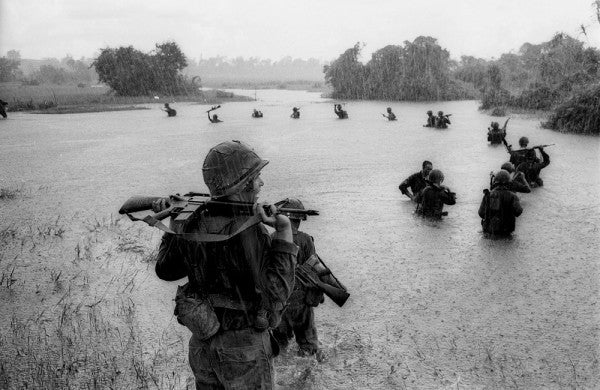 When the last of America’s troops left Vietnam on March 29, 1973, their return home brought a defining and divisive chapter in the country’s history to a close. Roughly 3 million men and women served in Vietnam and nearly 60,000 gave their lives over the course of the war.

Related: The story of the man that fought in his friend’s place in Vietnam »

To commemorate Vietnam Veterans Day, which was established on March 29, 2012 to honor those who served in the war, here are 10 incredible photos from the Vietnam War’s early days to years after.

After their unit landed in the middle of a Viet Cong staging area, a paratrooper with the 173rd Airborne provides cover for a wounded comrade while under sniper fire, on June 24, 1965.

A soldier with the U.S. 1st Air Cavalry Division is helped by a fellow soldier as he crawls from the mud of a rice paddy while taking heavy Viet Cong fire near An Thi in South Vietnam on Jan. 30, 1966. U.S. troops were engaged in a fierce 24-hour battle with the enemy along the central coast.

U.S. Army paratroopers with 2nd Battalion, 173rd Airborne Brigade hold their automatic weapons above water as they cross a river in the rain during a search for Viet Cong positions in the jungle area of Ben Cat, South Vietnam on Sept. 25, 1965. The paratroopers had been searching the area for 12 days with no enemy contact.

First Cavalry Division medic Thomas Cole, with one of his own eyes bandaged, continues to treat wounded Staff Sgt. Harrison Pell, during a Jan. 30, 1966 firefight at An Thi in the Central Highlands between U.S. troops and a combined North Vietnamese and Vietcong force.

Farewell ceremonies in Danang on July 25, 1969 mark the departure of the colors of the 9th Marine regiment which is being deployed to Okinawa under President Richard Nixon’s 25,000 troop withdrawal plan.

U.S. Marines prepare to board a ship in Danang for their return trip to the states.

Released prisoner of war Lt. Col. Robert L. Stirm is greeted by his family at Travis Air Force Base in Fairfield, California, as he returns home from the Vietnam War, March 17, 1973.

Don Wilkes, left, and Steve Giles stand outside of the Huntington, West Virginia Vet Center on July 30, 1980. Vietnam veterans themselves, both counselors endeavor to reach out to fellow veterans and their families in order to help them cope with the society they have returned to and must readjust to since the war.

Thousands of Vietnam veterans gather in Chicago's Grant Park following a parade through the city’s downtown on June 13, 1986. The parade was a “Welcome Home” tribute more than a decade after their return from Vietnam.

A man places his hand against the wall of the Vietnam Veterans Memorial in Washington, D.C., on Nov. 11, 1986, on Veterans Day.