Watson Baldwin, in the middle of the clearing, gazed skyward and spread opens his arms to guide the helicopter in to receive help from above. 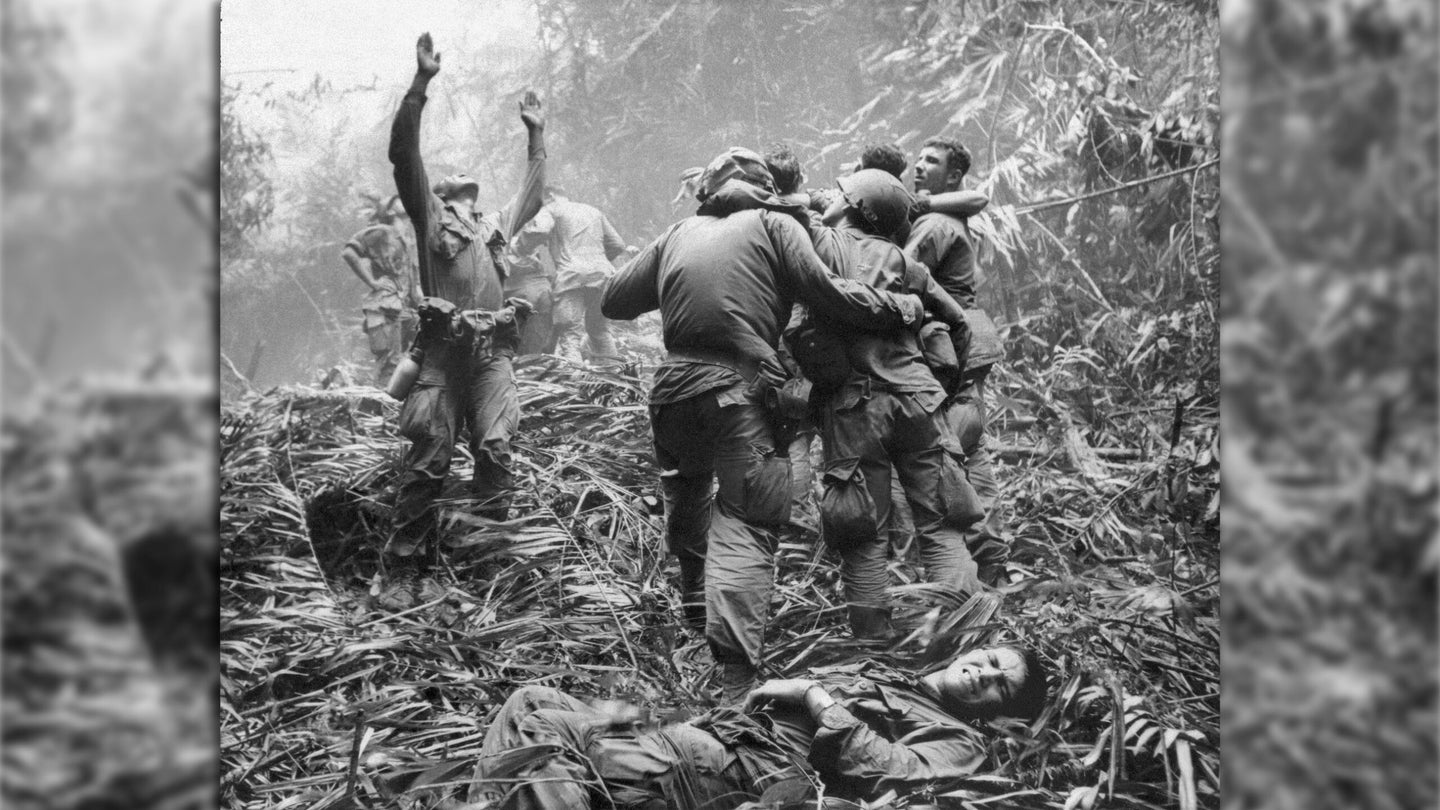 This April 1968 file photo shows the first sergeant of A Company, 101st Airborne Division, Watson Baldwin, guiding a medevac helicopter through the jungle foliage to pick up casualties suffered during a five-day patrol near Hue, April 1968. Two soldiers in the photo, Dallas Brown, bottom, and Tim Wintenburg, far right, recently reunited to talk to The Associated Press about the iconic photo and the war. (AP Photo/Art Greenspon, File).
SHARE

I was the first reporter to hear the story of Watson Baldwin, the African American Soldier pictured in one of the most famous photos of the Vietnam War.

“I’ve waited a long time to talk about this,” Sgt. Tim Wintenburg said. A tone of relief was evident in his voice. “Watson Baldwin was the finest platoon sergeant I ever served with… It’s him who’s the subject of the photo, other people who have claimed it; look at it and you can see he’s African American. Not white.”

“Help From Above,” was one of the most iconic images of the Vietnam War. The photo was nominated for a Pulitzer Prize and served as inspiration for the poster of the Vietnam War movie “Platoon”.  It graced the covers of countless books and was printed and reprinted on the front pages of newspapers across the world. No one — including the Associated Press — had, in the intervening five decades, thought to inquire as to the specific circumstances surrounding the photograph. In 2017, I was the first to do so.

Taken by Art Greenspon, a freelance AP photographer at the time, the photograph’s subject, Sgt. Maj. Watson Baldwin, stands with his arms in the air, signaling to the incoming aircraft. On the ground lies Spc. 4 Dallas Brown, writhing in pain from a back injury. In the far right, a helmetless soldier, Sgt. Tim Wintenburg, glances back at the camera as he carries a wounded comrade. The image has inspired movie posters, book covers, and copycats.

And yet no one knew Baldwin’s name — or his race.

Like so many African Americans before him, such as with the survivors of the Tulsa Massacre, or the African American troops who were critical to the defense of New Orleans in the War of 1812, Sgt. Maj Watson Baldwin passed away before the world could know about him. Just as was the case with all those other African Americans, his story was integral to understanding the United States today.

In the summer of 2017, I was a U.S. Army lieutenant in the 101st Airborne Division at Fort Campbell, Kentucky. I had just returned from Iraq and was working with Vietnam veterans who’d served in 1968. We were rededicating a memorial to those they had lost, thousands of young men killed half a world away from the homes they knew. As we visited the ceremony site, one of the veterans saw me looking at the famous photograph “Help From Above” on my phone.

“I know exactly how to find the guys who were in that photo,” he said, suddenly. “Give the division association a call.” He and I had often talked about history, and how much I loved learning it; it was one of the reasons I truly enjoyed working with the veterans. He gave me a number, and I called. This led me to Dallas Brown, the soldier found lying on the ground in the picture, grimacing in pain.

When I called him at his home in Kentucky, Brown was eager to talk, glad to be able to share what he and his fellow soldiers had experienced. I asked about other survivors in the photo. Brown put me in touch with Wintenburg, who now lived in Arizona. Brown called ahead to let him know that I wanted to talk; Wintenburg called me as soon as I got back to my office and began to tell the story.

It was April 1968. Back home, all across America, protests were spreading after the April 4 assassination of Dr. Martin Luther King, Jr. in Memphis. Washington D.C., Baltimore, Chicago, New York, and many other cities were engulfed in mass demonstrations. State and federal authorities were called in to respond to the unrest, and conservative politicians stoked the fears of white people across the nation, leading to white flight – the phenomenon of white families fleeing urban centers in large numbers – and increased segregation. On April 11th, President Lyndon B Johnson signed the Civil Rights act of 1968 into law, which included provisions for the federal prosecuting of hate crimes; meanwhile, former governor of Alabama George Wallace ran his presidential campaign by focusing on segregationist law and order policies.

He would shockingly carry five states that autumn.

In January 1968, the North Vietnamese Army (NVA) had launched its largest offensive of the conflict against American forces, beginning their attack on Jan. 30, the start of the Vietnamese holiday of Tet, in what became known as the Tet Offensive. Over 84,000 North Vietnamese communist troops attacked over 100 cities and U.S. installations, leading to the historic standoffs at Khe Sanh, Hue, and even threatening Saigon itself, the center of South Vietnamese power. Footage of the battle to protect the U.S. embassy was broadcast into homes across America. The fierce fighting laid bare the true nature of the Vietnam war and how military and civilian leaders had misled the public, which swiftly led to massive anti-war protests across the country. The public pressure against the Vietnam War would cause Lyndon B. Johnson to not seek reelection in the fall, opening the field for candidates such as Robert Kennedy and Republican Richard M. Nixon, who ran on a tough-on-crime platform, protecting the interests of the “silent majority,” while also claiming to support a peaceful resolution to the war.

Nixon, however, realizing that a peace deal could torpedo his presidential aspirations, enacted a plan to pressure South Vietnamese officials to reject peace so that Americans would turn to the Republican Party for ending the war. The Chennault affair, as it would be known later, was a success. Nixon kept American troops embroiled in Vietnam until 1972, at the cost of tens of thousands of American and Vietnamese lives in a conflict he knew was unwinnable.

Against this political and social backdrop during April 1968, in the A Shau Valley of Vietnam, near the Laotian border, Associated Press photographer Art Greenspon was embedded with soldiers from Company A, 2nd Battalion, 327th Infantry Regiment, 101st Airborne Division. Lt. Tom Sewell’s 1st Platoon was leading a search and destroy mission when they decided to stop and rest for a minute. Dallas Brown was relaxing near a tree when he noticed, in his words, a “tree moving.” It was an ambush. A firefight through the foliage ensued; a chaotic melee, representative of the larger conflict in Vietnam. Several men were wounded, and Lt. Sewell’s platoon set up a hasty landing zone for medical evacuation. Watson Baldwin, in the middle of the clearing, gazed skyward and spread opens his arms to guide the helicopter in to receive help from above.

Greenspon captured the image. When he sold it to the AP, it soon spread across the globe. However, when it was published by the AP, the only notification those in the photo received came in the form of letters from home with newspaper clippings attached. Their families had recognized them, even if the caption of the photo did not list their names. No one besides Greenspon ever thought to ask them about the photo, and because Baldwin died in 2005, he never got a chance to share his story.

Yet his likeness inspired images and thoughts throughout the years. The only physical proof of his role in the photo hung on the wall of 2/327’s battalion headquarters at Fort Campbell, donated to the unit by Art Greenspon, who had kept in contact with the soldiers over the years. As part of my research, I contacted him and he pointed out its location.

Though Baldwin was a Black man, the most famous portrayal of his iconic pose came from Willem Dafoe in Platoon, who is white (not to put blame on the film’s director Oliver Stone, who, himself, was an infantryman fighting in Vietnam in April 1968). Baldwin’s race was erased; whitewashed if unintentionally, as the country at the same time grappled with race relations and how African Americans were being sent to Vietnam to fight for freedom while not being afforded the same rights at home.

“He was a lead-by-example type of guy, always upfront leading the way and making sure we were doing the right thing,” Wintenburg told me. “Baldwin was also very compassionate. He did two tours in Vietnam and retired as a sergeant major. After the war, he went into trucking before he died.”

“What people didn’t understand back then but understand more now is that we were soldiers doing our jobs,” Wintenburg’s words, a common refrain heard throughout conflicts in history, among many different nationalities. “A lot of things back in the ‘world’ as we called it didn’t matter out there. What mattered was that it was life and death, and what mattered was keeping each other alive. The loyalty we had to each other was profound.”

The loyalty the men had to each other on the battlefield continued for decades; even 50 years later they kept in constant contact. As I sat there listening, I began to understand that this story needed to be told. Baldwin, like thousands of African American soldiers through American History, had fought for a country that despite its failings, was worthy in their eyes of defending. Even as Americans at home voted for George Wallace or other politicians that supported racist policies, even as the nation struggled with racial justice, he had taken care of his soldiers, white and black, during some of the worst fighting of the Vietnam War.

It resonated with me. In 2016 during the presidential election, I was in Iraq. I had watched in anger as people across the country had celebrated the electoral results by running through college dorm hallways yelling America was for whites only, or by the spraying of anti-Semitic messages on Jewish synagogues. Even almost 50 years on, the reality Baldwin faced when he returned home after serving his country was one that myself and my fellow soldiers would face.

I published an article about Baldwin and his fellow soldiers for the Army, and eventually, the AP did a follow-up story. Mr. Wintenburg told me afterward that the process had helped him heal, and he was glad to pay homage to Baldwin’s memory. The healing went both ways.