A machine gun-toting rabbit may seem like an unusual choice for a mascot, but whimsy is a common feature of Air Force shoulder patches. 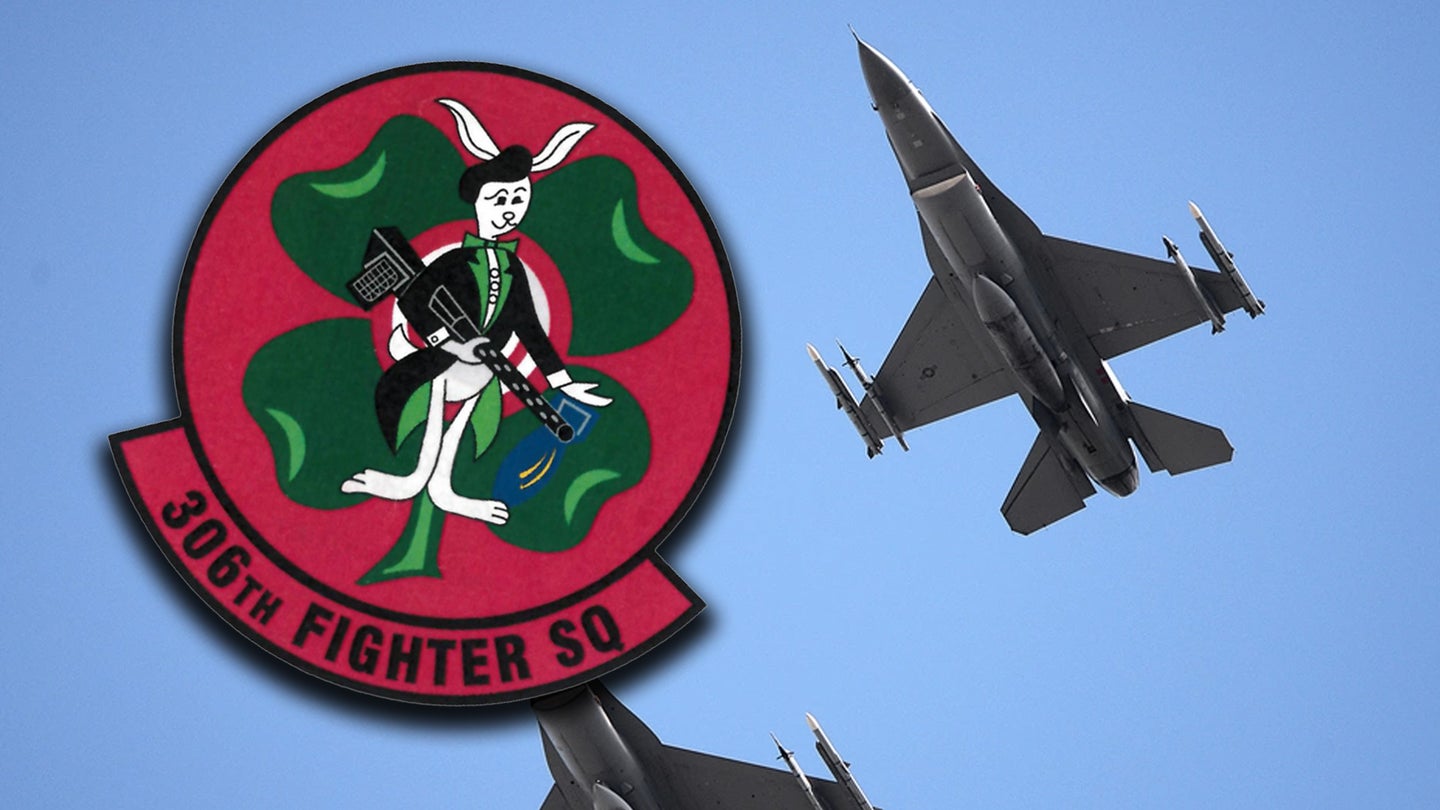 America’s enemies have a new creature to fear that has long white ears and wears a tuxedo. The Air Force’s 177th Fighter Wing announced on Friday the activation of the 306th Fighter Squadron, a unit that has been dormant for decades but has a rich combat history and an even richer mascot.

The 177th Fighter Wing did not respond in time to provide a history of the emblem, but press materials show it features a rabbit wearing a tux and a beret and holding a machine gun in front of a four-leaf clover. Photos of the patch uploaded to Wikipedia appear to date the image back to the 1950s, which coincides with when the 306th Fighter Squadron was first activated in 1957.

A machine gun-toting rabbit may seem like an unusual choice for a mascot, but whimsy is a common feature of Air Force shoulder patches. Take, for instance, the mascot of the 311th Fighter Squadron, which features a snake made out of an ammunition belt bearing fangs; or the samurai riding a lightning bolt in the patch for the 14th Fighter Squadron. And don’t forget the 422nd Test and Evaluation Squadron, which features some kind of bat or demon holding a smoking gun and a bloody dagger. Compared to those symbols, the bunny of the 306th doesn’t seem so strange. In fact, the image may have been prescient when it was adopted in the 1950s, because the squadron likely used a lot of guns and a lot of luck during its time fighting in the early years of the Vietnam War.

The 306th Tactical Fighter Squadron, as the unit was called at the time, was part of the 31st Tactical Fighter Wing when the wing deployed en masse to Tuy Hoa Air Base in southern Vietnam in December, 1966. The squadron flew F-100 Super Sabres, swept-wing fighters that were designed as interceptors and used to escort reconnaissance and bomber flights into North Vietnam. However, as the war progressed, it became clear that the ‘Hun’ (short for F-100) was “not a good match against North Vietnamese MiG-17s and -21s in air-to-air combat,” according to the National Air and Space Museum.

Instead, the F-100 began flying close air support missions, dropping bombs and napalm in support of ground troops across much of Vietnam and in Laos and Cambodia. A common load out for F-100s flying close air support was two napalm canisters, two external fuel tanks, and two 500-pound Mk. 82 “Snake-eye” bombs. This combo became known as “snake and nape,” where pilots would drop napalm in the first pass over a target, then the Mk. 82s on the second pass. Though many F-100 missions were short, about one or two hours, pilots often flew more than one sortie per day and sometimes dropped bombs mere miles from base. This led pilots “to quip that they were dropping their bombs before their [landing] gear was even up,” the Smithsonian wrote.

Hun pilots flew low so they could hit ground targets with greater accuracy, sometimes within 170 feet of friendly troops, the Smithsonian said. At times the jets were so low that pilots had to fly through treetops to regain altitude.

“The reliability and accuracy of the F-100 led the ground forces to refer to the planes as ‘flying artillery,’” the Smithsonian explained.

The ‘flying artillery’ was in high-demand, flying 360,000 combat missions from 1964-1971. We can imagine that the 306th earned its patch during this time, as its weapons were probably very fortunate for troops on the ground. It was dangerous work, too: 193 F-100s were downed by enemy anti-aircraft fire and ground forces, and another 45 due to operational accidents, the Air Force wrote.

The F-100 was soon replaced by its more capable cousins, the F-4 Phantom IIs, F-105 Thunderchiefs, and A-7 Corsair IIs, wrote HistoryNet. Likewise, the 31st Tactical Fighter Wing left Vietnam in 1970, and the 306th Tactical Fighter Squadron went on to be periodically activated and inactivated over the ensuing decades before being resurrected last weekend as something very different.

Instead of intercepting enemy bombers or providing close air support, the 306th’s new mission is to “support the increased maintenance requirements” of the aging F-16 fighter fleet operated by the New Jersey Air National Guard’s 177th Fighter Wing, according to the Air Force. The reincarnated squadron is made up of some 50 or so active-duty pilots, aircraft maintainers and support airmen who will help advise the Air Guard wing and bolster its performance.

The average age of the 780 F-16Cs operated across the Air Force, Air National Guard and Air Force Reserves is about 31 years old, according to the 2022 Air Force and Space Force almanac, which makes it a small miracle that Air Force maintainers can still keep them flying.  The maintainers assigned to the 306th will help fix up the F-16s at the 177th, while the squadron’s veteran pilots will pass on their hard-won lessons to their Guard colleagues. The 306th is one of 10 such squadrons across the service where active-duty airmen perform similar missions with other Guard and Reserve units.

This kind of Guard-Active interaction is known as an Active Association. The 177th has had a few training opportunities with active duty F-16 pilots over the past five years, but the activation of the 306th turns those opportunities up to 11.

“With the activation of the 306th Fighter Squadron, we will have a full Active Association here,”  said Lt. Col. Gregory P. Poston, II, 177th Operations Group commander. “I can’t wait to welcome them into our team and look forward to building a lasting relationship that will improve the Air Force as a whole in both training and combat employment.”