The F-16 was assigned to the 480th Fighter Squadron, 52nd Fighter Wing at Spangdahlem Air Base, Germany 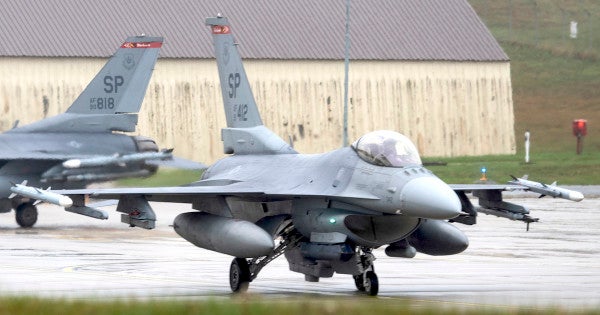 An Air Force pilot was able to safely eject before an F-16 Fighting Falcon crashed Tuesday in Germany, Air Force officials have announced.

The plane went down about 3 p.m. near Zemmer, Germany, during a routine training flight, a 52nd Fighter Wing news release says.

The pilot sustained minor injuries and the crash is under investigation, the news release says.

Uwe Konz, a spokesman for German police, told Task & Purpose the pilot was the only person in the plane at the time of the crash. Konz said he assumed the pilot is still being treated at a hospital.

No one else was injured in the crash. No further information about how the plane crashed was immediately available.

The F-16 was assigned to the 480th Fighter Squadron, 52nd Fighter Wing at Spangdahlem Air Base, Germany.