“We just wanted to have our little spin on it and do it our way.” 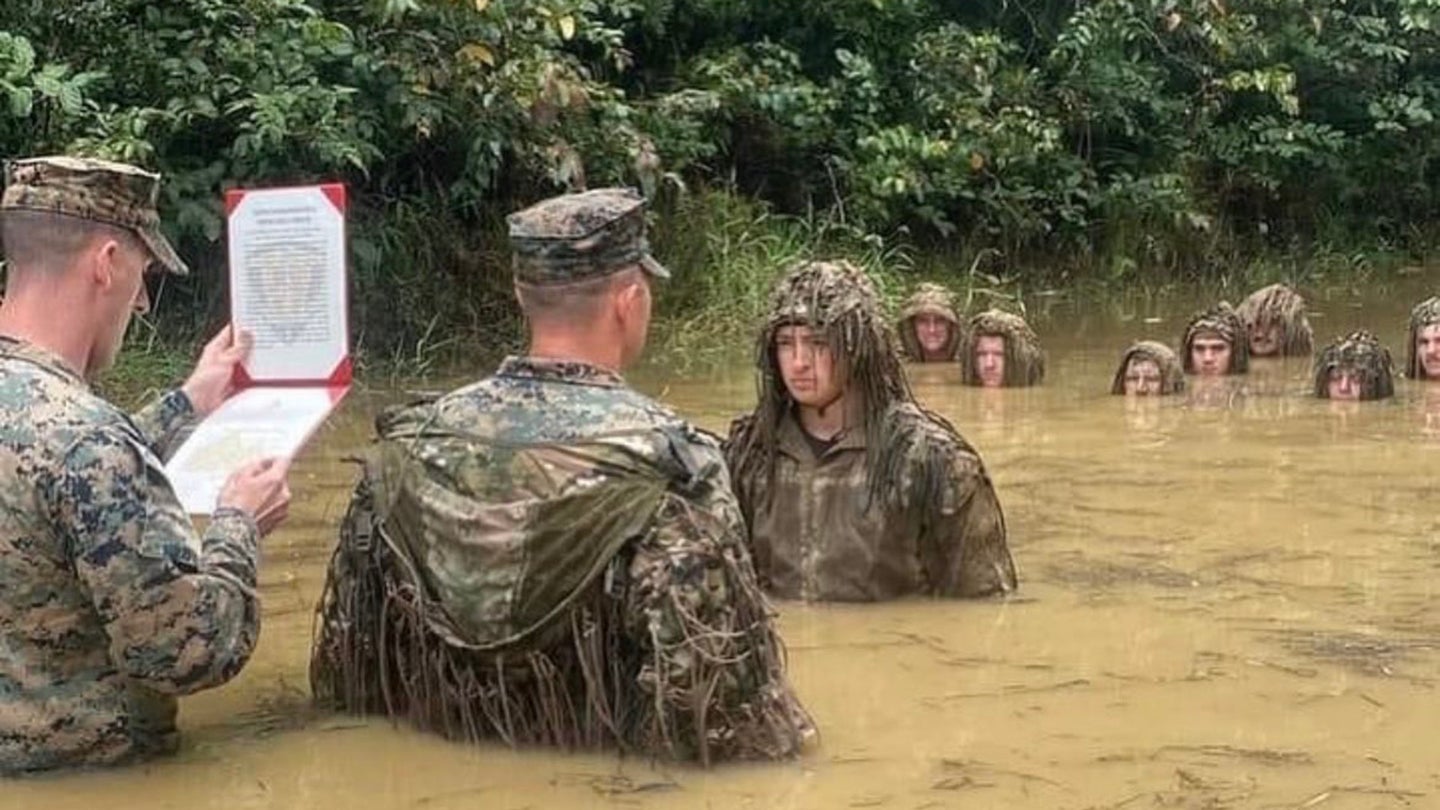 Scout Snipers are a special breed of Marine. They go through extensive training to learn how to become masters of camouflage and marksmanship, to move without being detected, and to operate as a two-Marine team: One spotter, one shooter.

Given how much time Scout Snipers spend living and training in austere environments, it’s fitting that one of them held his promotion in a swamp that was likely a spawning ground for leeches.

A picture shared on social media shows Sgt. Jordan James being promoted to his current rank while stoically standing chest deep in chocolate brown water. James is currently the chief scout with Scout Sniper Platoon, Weapons Company, 3rd Battalion, 3rd Marines, said Master Sgt. Matt Epright, a spokesman for the 3rd Marine Division. As chief scout, James serves as a platoon sergeant and an expert on many of the platoon’s tactics, techniques and procedures.

In the picture, James is wearing a ghillie suit made from local reeds and other plants, which Scout Snipers use to blend into their surroundings. Seven other Marines can be seen in the background observing the promotion ceremony while submerged up to their chins in the murky water — one Marine is nose-deep in the ooze.

James, who is currently in Okinawa, told Task & Purpose that he decided to have his promotion ceremony during a training event in which he and his fellow Scout Snipers would be in swampy water to use mud to make their ghillie suits.

He explained that he did not want the entire platoon to focus its attention on him when he picked up sergeant. Instead, James decided to hold his promotion ceremony in the fetid swamp, which the Scout Snipers nicknamed “The Pig Pond,” because all the Marines would be equal in that environment.

“Everything we do in Scout Sniper Platoon is very team-oriented,” James said. “So, doing it in the Pig Pond, being together, all wearing the same garb, all kind of suffering together, just made it seem like more of a team thing.”

James’ promotion ceremony shows how creative service members can be for important events. Maj. Gen. DeAnna Burt was sworn into the Space Force at a May 2021 ceremony attended by nearly all the villains in the Star Wars universe. Cosplayers dressed as Imperial Stormtroopers, an Imperial Guard, Boba Fett, and Darth Vader were on hand for the event.

Sometimes, levity can go too far. The Tennessee Air National Guard took great offense in 2018 when a senior noncommissioned officer used a dinosaur sock puppet while reciting the oath during her reenlistment ceremony. The airman was fired and the colonel who led the ceremony was retired at the rank of lieutenant colonel.

James said he decided to be promoted in the Pig Pond roughly two weeks before the July 1 ceremony. He also said his platoon does not have many sergeants in it, so it’s not often that the Scout Snipers get to hold such a promotion ceremony.

“It’s something that we didn’t have too much of,” James said, “So we just wanted to have our little spin on it and do it our way.”