The image makes up for its lack of anatomical realism with its throbbing impulse to break from traditional modes of representation. 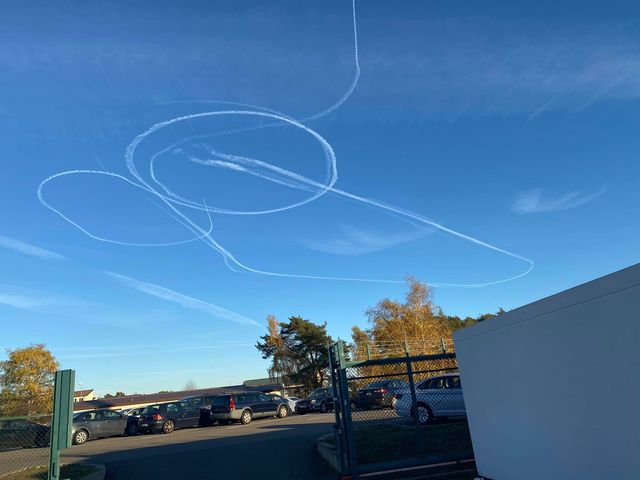 Much like how the mechanization of early 20th-century Europe influenced Picasso, Braque, and Metzinger, it appears that the pressures of COVID-19, a presidential election, and countless other upheavals are pushing the U.S. military’s foremost sky penis artists to produce ever more radical images of their most treasured sex organ.

Indeed, a sky penis that appeared over Ramstein Air Base, Germany this week makes up for its lack of anatomical realism with its sheer, throbbing impulse to break from our traditional modes of representation and introduce new forms of seeing and being.

“By breaking objects and figures down into distinct areas – or planes – the artists aimed to show different viewpoints at the same time and within the same space and so suggest their three dimensional form,” writes the Tate on the definition of cubism, which may help one begin to understand the profundity of the Ramstein School’s debut work.

The U.S. Air Forces in Europe did not respond to requests for comment on the image. That could be because the public affairs shop has better things to do, or because it was a willful effort to destabilize our notions of the artist and modes of production.

Either way, it’s beautiful! Whoever created this image (if images are, indeed, created), deserves a proud place in line with their forebears, such as those found at the Miramar School, the Whidbey Movement, and the Eielson Project.

Ramstein has most certainly sprung up, as it were, on the art world’s radar, and we will keep a close eye upon it for future bursts of pure avant-garde energy.

Related: The Military’s Phallus Fixation: Or, How I Learned To Stop Worrying And Love Sky Dongs.