Two Marine Corps pilots have been grounded amid an investigation into allegations they drew a giant penis with their flight... 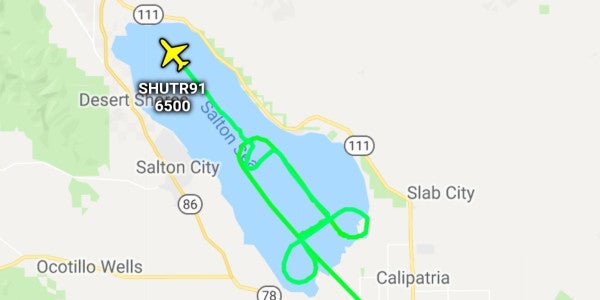 Two Marine Corps pilots have been grounded amid an investigation into allegations they drew a giant penis with their flight path over Southern California last month.

The Corps opened an investigation after the military-grade sky dong was made by a T-34C trainer aircraft from Marine Fighter Attack Training Squadron 101 out of Miramar, California. The phallic image was first spotted just west of an aerial gunnery range by a Twitter user known for surfacing interesting flights:

“The T-34C crew that are being investigated for flying a pattern resembling an obscene image are currently not flying pending the results of an ongoing investigation,” Maj. Josef Patterson, a spokesman for 3rd Marine Aircraft, told The Washington Examiner.

“Although not flying for the time-being, the two Marine Corps aviators are still providing vital squadron ground support functions.”

The Marine pilots seemed to be competing against the Navy for aerial sky dong supremacy. Two Naval aviators were disciplined after the infamous sky dick episode of 2017, in which an EA-18G Growler aircraft flew a penile pattern in the skies over the state of Washington.