Hastily-scrawled drawings of male genitalia have appeared on walls, school desks, and other flat surfaces around the world since the... 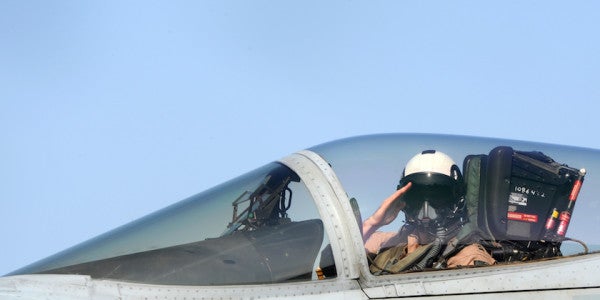 Hastily-scrawled drawings of male genitalia have appeared on walls, school desks, and other flat surfaces around the world since the dawn of human history, but it’s not every day that you see a giant dong rendered in jet-smoke across the heavens.

The good people of Okanogan County, Washington can now check that item off their bucket list thanks to a mischievous Navy pilot, whose obscene sky-drawings have brought joy to some and grief to others — including his (or her) chain-of-command.

“The Navy holds its aircrew to the highest standards and we find this absolutely unacceptable, of zero training value and we are holding the crew accountable,” Naval Air Station Whidbey Island officials said in a statement to Spokane’s KREM Channel 2 News, which posted a series of viewer-submitted photos of the sky dong on its website on Nov. 17.

While many appear to have appreciated the pilot’s high-flying shenanigans — Okanogan County resident Anahi Torres accompanied the photo of the sky dong she uploaded to Twitter with a caption that reads “The most monumental thing to happen in omak. A penis in the sky” — not everyone was so impressed. KREM 2 reports that a local mother who sent the station pictures she took of the sky dong was deeply upset by it, afraid that she might have to explain the drawing to her young children.

The Navy has not publically released the pilot’s identity, and what punishment he or she will endure as a result of this stunt is unknown. The matter will likely be handled by the Navy internally as sky dongs, offensive as they may be, are not illegal: FAA officials told KREM 2 that “unless the act poses a safety risk, their is nothing they can do about.”

Some pilots at NAS Whidbey did some sky writing today. ??‍♂️https://t.co/9IsYvkX1za pic.twitter.com/Lm7kpMhKpY

However, those who stared at the sky dong long enough to suffer a strained neck or sun-damage to their retinas could argue that this was not a victimless crime.

But was it intentional? KREM 2 seemed to raise the possibility that the pilot could have had some other image in mind when he or she was swirling over Okanogan County on Nov. 16. “Photos sent to KREM2 by multiple sources show skydrawings of what some people are saying is male genitalia,” the station’s article reads.

Task & Purpose has scrutinized the photos closely and can say with 100% certainty that it’s definitely a dick. Stay tuned for updates.