The F-35 completed yet another milestone on Tuesday by becoming the first fifth-generation aircraft to draw a giant dick in the sky.. 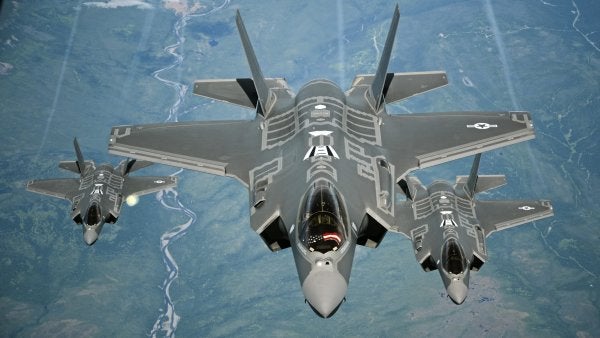 People near Luke Air Force Base in Arizona got a view of the “penis contrail” that Fox 10 Phoenix said “vaguely resembles the male anatomy.”

That F-35 sky penis above Luke AFB? It wasn’t intended to be a sky penis, base says. New on @AirForceTimes: https://t.co/UTLKqmwnX3 pic.twitter.com/5mb4IeRebv

“We've seen the photos that have been circulating online from Tuesday afternoon,” a Luke Air Force Base spokesperson told Task & Purpose.

“56th Fighter Wing senior leadership reviewed the training tapes from the flight and confirmed that F-35s conducting standard fighter training maneuvers Tuesday afternoon in the Gladden and Bagdad military operating airspace resulted in the creation of the contrails. There was no nefarious or inappropriate behavior during the training flight.”

Maj. Rebecca Heyse explained to Task & Purpose that there were six total F-35's carrying out an air-to-air training flight on Tuesday, with two serving as “blue air,” or friendly forces, and four more serving as “red” enemy forces. The phallic-shaped contrail showed up incidentally to the “blue” aircraft flying in circles as they were waiting for word that “red” air was ready to be engaged.

“What you're not seeing is there is a third vertical contrail that's outside” many of the photos posted online, Heyse said.

Still, I've been reporting on the military for over seven years, and I can tell you the number of military aircraft drawing penis-shaped clouds in the sky has reached unprecedented levels. At this point, I wouldn't be surprised if they added Sky Dick Drawing alongside the tried-and-true Split-S and Scissors of “standard fighter training maneuvers.”

The news out of Luke comes just weeks after Navy Times got its hands on the transcript of the most infamous “sky penis” incident of all from 2017, in which the pilot and electronic warfare officer did their own sky dong-writing but lamented that the balls “are going to be a little lopsided,” among other choice quotes.