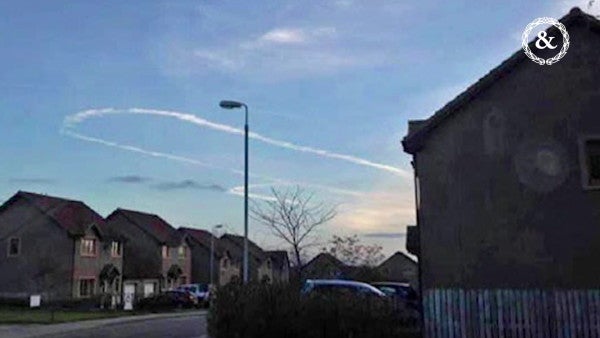 It's long been known that two Navy pilots were behind the infamous “sky dick” episode of 2017, but thanks to Geoff Ziezulewicz at Navy Times, we have a cockpit transcript of the ballsy pair of aviators as they formulated and then executed their flight into military aviation history.

“Draw a giant penis. That would be awesome,” the electronic warfare officer told the pilot after they had finished a training flight near Naval Air Station Whidbey Island on Nov. 16, 2017, according to a report of the investigation into the incident obtained by Navy Times.

“What did you do on your flight?” the pilot joked in response to the EWO's suggestion. “Oh, we turned dinosaurs into sky penises.”

“You should totally try to draw a penis,” the EWO said again, stopping just short of hitting him with a “no balls” comment that always leads to smart decisions.

The pilot then said “that would be easy” to do, explaining to the EWO that he could draw a figure-eight pattern to make a giant majestic penis from the contrail of his EA-18G “Growler” aircraft that “airliners coming back on their way into Seattle” would be able to see.

“We could almost draw a vein in the middle of it too.”

Eventually, they got down to business. And with training and precision that will no doubt inspire naval aviators of the future, they calmly talked through their flight to make sure the sky penis was as amazing as possible.

Some pilots at NAS Whidbey did some sky writing today. ??‍♂️https://t.co/9IsYvkX1za pic.twitter.com/Lm7kpMhKpY

“Balls are going to be a little lopsided,” the pilot advised.

“Balls are complete,” he reported moments later. “I just gotta navigate a little bit over here for the shaft.”

“Which way is the shaft going?” the EWO asked.

“The shaft will go to the left,” the pilot answered.

“It's gonna be a wide shaft,” the EWO noted.

“I don't wanna make it just like 3 balls,” the pilot said.

“To get out of this, I'm gonna go like down and to the right,” the pilot said. “And we'll come back up over the top and try to take a look at it.”

“I have a feeling the balls will have dissipated by then,” his partner answered.

“It's possible,” the pilot said.

They flew away to a distance where they could take in their work.

They cracked up in the cockpit as their sky penis came into full view, snapping pics they would later delete once they realized their command would likely go apoplectic.

“Oh yes, that was (expletive)ing amazing,” the pilot said. “This is so obvious.”

As the pair took in their majestic aerial artwork, it then dawned on them that, holy crap, this thing is really staying in place and a whole lot of people are going to see this, according to the investigation: “Soon after, I realized the extent of our actions,” the pilot wrote later.

Of course, we know the rest of this story. Once they were on the ground, images of the sky dong were already moving rapidly around the internet, which inspired countless news stories, copycat attempts by other military aviators, and even think-pieces in their defense.

Check out the full write-up at Navy Times. It's very much worth it.