U.S. military aircraft have used inappropriate call signs several times over the past year, including “Titties” and “Boobies.” 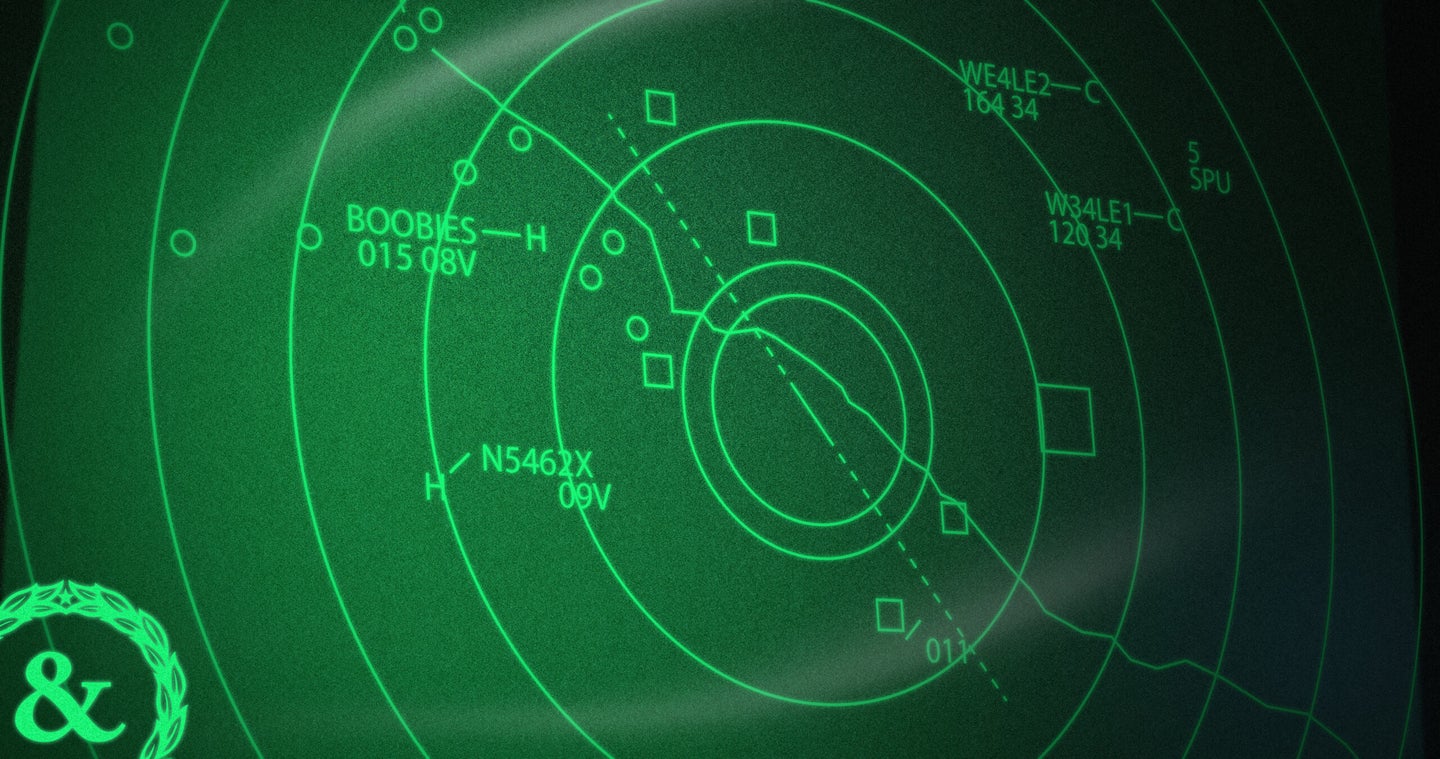 A number of unconventional military call signs have shown up on flight tracking apps in the past year. (Aaron Provost/Task & Purpose).
SHARE

When an Air Force KC-135 broadcast “Titties” as its call sign during a mission last month over the Mediterranean Sea, it was not an isolated incident.

Flightradar24 detected two incidents on March 6 and 9 when separate KC-135 aerial tankers briefly transmitted the call sign “Boobies” while the planes were on the ground at Al Udeid Air Base in Qatar, said Ian Petchenik, a spokesman for the flight tracking service.

Every aircraft’s call sign needs to be entered into its flight management computer, Petchenik told Task & Purpose. Normally, that is done by someone aboard the aircraft.

After a KC-135 broadcast “Titties” as its call sign on Dec. 16, U.S. Air Forces Central Command announced it was  “taking appropriate action to address this behavior,” Lt. Col. Michael Hertzog, a spokesman for the command, told Task & Purpose at the time.

The B-1B was undergoing scheduled depot maintenance and modification at the Oklahoma City Air Logistics Complex at the time, Kaufman told Task & Purpose.

“During this process, while the aircraft was on the ground and connected to test equipment, an inappropriate code was briefly transmitted,” Kaufman said. “The incident is under investigation.”

It is unlikely that that B-1B was somehow hacked so that it would broadcast a fake call sign because only a handful of people would have known that the bomber was being repaired at Tinker Air Force Base along with the B-1B’s hex code — the unique transponder code used to identify the aircraft, the moderator behind the Evergreen Intel account told Task & Purpose on Monday.

Tanker, bomber, and other military aircraft crews do not get to pick their own call signs, said a C-17 pilot with 16 years of experience, who spoke with Task & Purpose on condition of anonymity. Aircraft are assigned call signs to distinguish which command they fall under.

For example, an aircraft dispatched from the Tanker Airlift Control Center at Scott Air Force Base, Illinois to the Central Command theater of operations will typically have “Reach” in its call sign, said the pilot, who was not authorized to talk to reporters. Meanwhile, military aircraft that are part of units deployed to the Middle East or Southwest Asia will have call signs that are unique to their particular plane. For example, C-17s typically have call signs with the word “Moose.”

While aircrews don’t have a say over what call signs they get, it is possible for an airman to change the call sign by manually inputting a new code in their aircraft’s flight management computer, the pilot said. Sometimes, Turkish air control changes the numeric portion of a U.S. military aircraft’s call sign, so the crew has to input the new code while flying through Turkish air space.

It is also possible for aircrews to enter a joke call sign into the computer if they think that no one is looking, the pilot said. Such jokes are more common among deployed units, where humor tends to reflect the “prison mentality” that airmen feel while downrange, he said.

Sometimes, deployed airmen get in trouble for carrying out pranks, such as changing an aircraft’s call sign to see if the replacement crew notices, the pilot said.

“A commander will sit the crew down and be like: That’s bad; don’t do it again or I’ll give you paperwork,” he said. “So, usually you get a warning with that stuff and [if] it becomes a habit, then you get in trouble. But that’s just military pilots being military pilots.”

But such humor can also have real consequences for military aviators’ careers, such as when Air Force Lt. Col. Paul Goossen was fired in November 2018 because he was unable to prevent airmen with the 69th Expeditionary Bomb Squadron from drawing penises while the bomber was deployed to Qatar.

Two Navy aviators were also administratively disciplined after flying their EA-18G Growler in a phallic pattern over Washington state in November 2017.

Flight trackers are now so primed to search the skies for penis-like flight patterns that Air Force officials issued a statement in November saying that a KC-135 had not flown in a phallic pattern after the Italian newspaper la Repubblica reported that the aerial tanker had drawn a penis in the sky near a Russian base in Syria.

“Bottom line is there is no excuse for this kind of unprofessional behavior,” said Deptula, dean of the Air Force Association’s Mitchell Institute for Aerospace Studies think tank.

He added that fighter pilots’ call signs need to be approved by “adult leadership.”

However, one reason why inappropriate call signs may continue to be an issue is that misogyny is deeply embedded deep within the culture of military pilots, said a retired KC-135 pilot, who spoke on condition of anonymity to protect her career with a commercial airline.

Air Force pilots can embrace lewd and immature behavior to the point where it saturates the work environment, said the pilot, who flew two active-duty assignments in KC-135s for roughly six years in total.

“I had to think on things a LONG TIME when I began to consider coming back to flying as a profession after a number of years away from it (and the Air Force) because I needed to be sure I could stomach coming back to a boys club with all its accessories,” she told Task & Purpose.