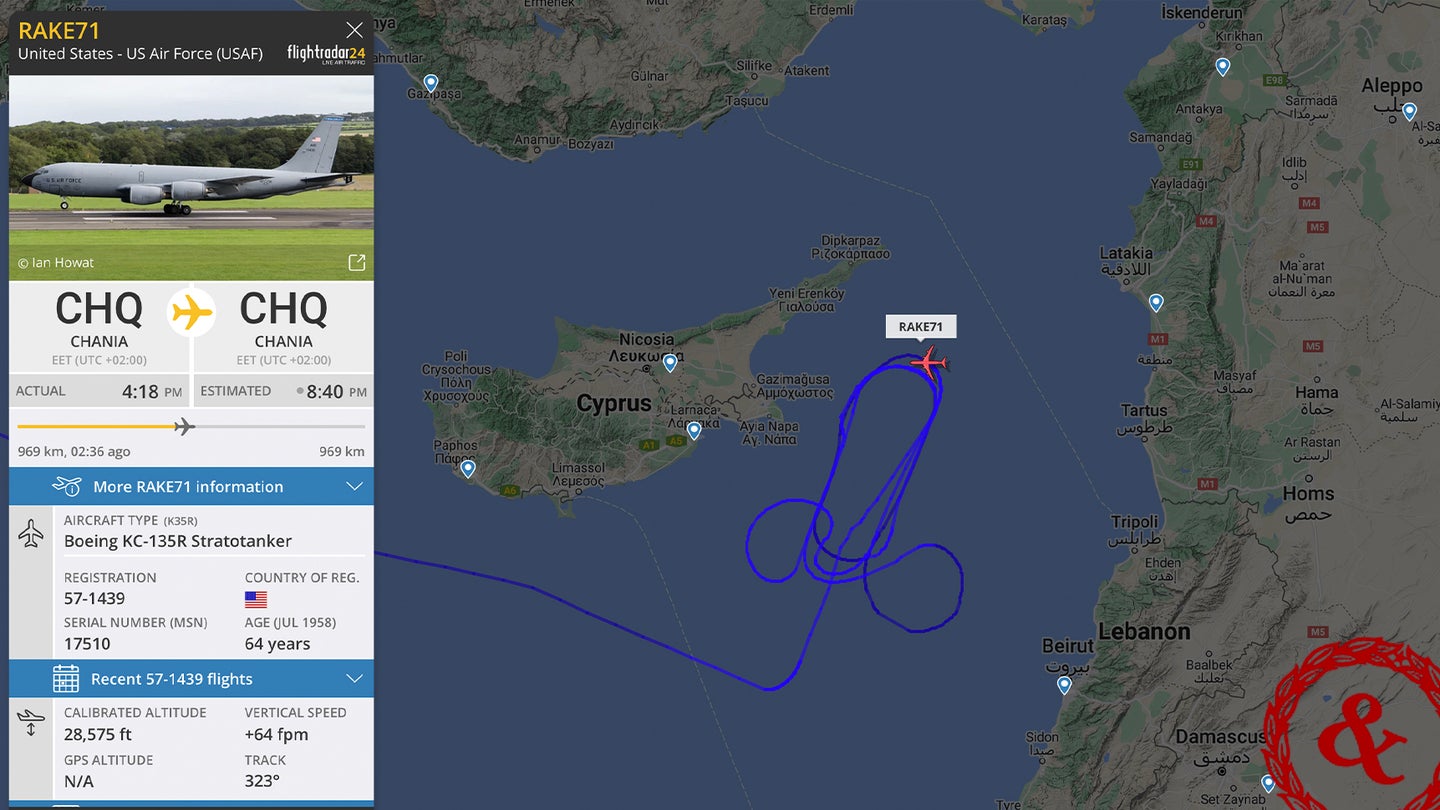 A screenshot showing the flight path taken by an Air Force KC-135R near Syria. (FlightRadar24).
SHARE

The leadership for U.S. Air Forces in Europe has determined that a KC-135 aerial tanker did not mean to fly in a phallic flight pattern near a Russian base in Syria recently, said USAFE spokesman Capt. Ryan Goss.

“The KC-135 Stratotanker (RAKE71) operating in the Eastern Mediterranean adjusted between multiple different flight tracks during the course of the mission,” Goss said in a recent statement. “While these adjustments and movements appear to create a vulgar outline, there was no intent by the pilots or the unit to do so. As we continue to look into this, USAFE-AFAFRICA, AMC [Air Mobility Command] and the USAF will continue to maintain the highest standards of professionalism and airmanship.”

Earlier this week, the aircraft took off from Chania International Airport and flew east of Cyprus. FlightRadar24, a flight tracking service, shows that the KC-135’s flight path included an oval and two circles, prompting the Italian newspaper la Repubblica to speculate that the plane had drawn a sky penis in front of Russia’s naval base in Tartus, Syria.

But Cyprus is roughly 163 miles from Tartus, and while it’s unclear how close the KC-135 was to the Russian base, the aircraft was never in Syrian airspace, an Air Force official said.

“We aware of the incident and are talking with the KC-135 crew to determine the details,” Pickart said on Friday. “At this time, we do not believe the crew acted inappropriately, flying a refueling orbit consistent with requirements that met the needs of receiver aircraft.”

No further information about the alleged incident was immediately available.

While U.S. officials say that the KC-135’s aircrew did not mean to fly in a pattern that resembled the male anatomy, there have been previous incidents in which American pilots intentionally drew large penises in the sky.

Two Navy aviators were administratively disciplined in 2017 for using the contrails of their aircraft to create a large penis-shaped pattern over Washington state, and two Marine aviators were grounded the following year for their aerial rendering of the male sex organ.

Moreover, in October 2019 U.S. troops left penis drawings for the Russians to find when they moved out of their base in northeastern Syria.

For reasons that remain not fully understood, phallus imagery has become an integral part of the American warfighter’s psyche. In 2018, an Air Force lieutenant colonel in charge of the 69th Bomb Squadron was relieved of command because his subordinates kept making penis doodles on the moving map software for nuclear-capable B-52 bombers.

Phallic imagery has even made its way into service members’ everyday language. For example, a malfunctioning piece of equipment, or a service member who is constantly out of commission for an injury, is sometimes referred to as “broke d—k.”

“The core of a military identity is tied into this warrior ethos of being strong and tough,” Ramon Hinojosa, a sociology professor at the University of Central Florida, told Task & Purpose in 2018. “This notion that being tough and strong and having a sexual prowess is just a core part of what we as Americans see masculinities are. That translates across institutions, at least as far as the military is concerned, into strong, tough, heterosexuality. Of course, the depiction of a penis just sort of boils that right down to the essence of the masculine norm.”

With tensions between the United States and Russia at their highest levels since the Cold War, it is likely that this will not be the last time that actions by one side will be interpreted as a d–k measuring contest.

UPDATE: This story was updated on Nov. 4 with comments from Air Force Col. Damien Pickart, the top spokesman for Air Mobility Command.