“I'm honestly afraid to get out," the soldier says. "Yeah, you should be,” replied the officer. 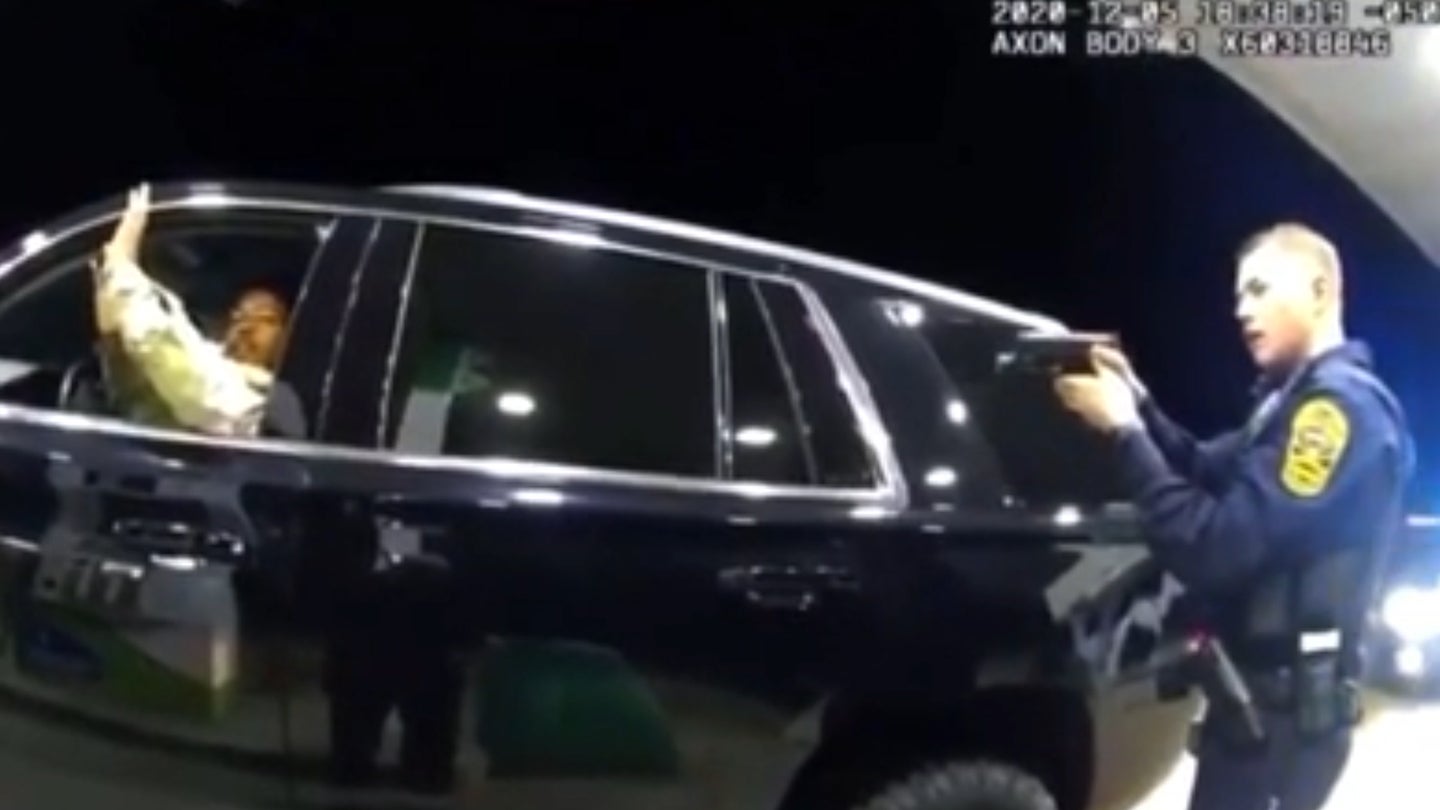 A U.S. Army second lieutenant has sued two Virginia police officers over their actions during a traffic stop late last year when the police drew their weapons, pointed them at him, pepper-sprayed him, and forced him to the ground — while he was unarmed and wearing his uniform.

Body camera footage from the Dec. 5 encounter in Windsor, Virginia, shows 2nd Lt. Caron Nazario in his Chevrolet Tahoe with his hands raised out of the driver-side window, as he tells one of the officers: “I’m honestly afraid to get out.”

“Yeah, you should be,” replied Windsor police officer, Joe Gutierrez, after approaching the vehicle with his weapon trained on the lieutenant.

The exchange is one example from the lawsuit brought against Gutierrez and fellow Windsor police officer Daniel Crocker by Nazario, who is Black and Latino. The lawsuit alleges that Nazario’s constitutional rights were violated during the traffic stop, which took place at a BP gas station in the town.

At the time of the traffic stop, Nazario was on his way home from work at his duty station — which was not specified in the lawsuit — when Crocker radioed that he was attempting to stop a vehicle with tinted windows and no rear license plate.

According to the Associated Press, Crocker said that Nazario was “eluding police” and classified the encounter as a “high-risk traffic stop.”

However, Nazario’s attorney, Jonathan Arthur, argued that the Army officer wasn’t trying to elude police, but was in fact trying to find an area where he could safely park.

Gutierrez, who was listening to Crocker over the radio, was aware of both the reasons for the stop as well as Lt. Nazario’s compliance with Crocker’s signal to slow down and pull over.

It was dark, however, and it appeared to Lt. Nazario that there was no good location in the immediate vicinity to stop safely. So, for the benefit of the officer’s safety and his own, Lt. Nazario continued slowly down US 460, below the posted speed limit, for less than under a mile, until he spotted a well-lighted BP gas station. He pulled over in the parking lot. From the time that Defendant Crocker initiated the traffic stop until the time Lt. Nazario pulled over into the BP parking lot, approximately 1 minute and 40 seconds elapsed and Lt. Nazario had traveled less than a mile.

According to the lawsuit, by the time the officers reached Nazario’s vehicle, his “cardboard temporary plates,” which were “taped to the inside of the rear window of the vehicle at the top and on the passenger side,” were visible — a missing rear license plate was the purported reason for the traffic stop.

Once at the gas station, the situation escalated rapidly. Nazario had his window rolled down and his hands outstretched and empty. The two officers approached Nazario’s vehicle with their weapons drawn and pointed them at the soldier, according to the suit. The encounter at the gas station was caught on both of the officers’ body cameras, and recorded by Nazario, who after parking his car set his cell phone up to record video of what was happening.

At one point in the bodycam footage, the officers attempt to force Nazario from his vehicle while he continues to keep his hands in the air. Gutierrez can be heard telling Crocker to step back, before taking out pepper spray and using it on Nazario, as the officers continue to yell at the soldier to get out of the car.

“I don’t even want to reach for my seatbelt, can you please?” Nazario said, clearly afraid that removing his hands from view might give the impression that he was reaching for something, and thus escalate the situation further.

“My hands are out, can you please — look, this is really messed up,” the soldier said after being pepper-sprayed.

During the encounter the officers shouted conflicting orders at the soldier, telling him to open the door and get out, while also telling him to keep his hands raised out of the window.

The lawsuit goes on to state that at one point during the encounter, Gutierrez said Nazario was “fixin’ to ride the lightning” — which the lawsuit claims is a “glib reference to execution by the electric chair.”

The suit argues that “Gutierrez intended this statement to mean, and this statement would be reasonably understood to mean, that Gutierrez was going to execute Lt. Nazario right there in the gas station parking lot, for some reason that the Defendants were unwilling and unable to articulate to Lt. Nazario.”

Gutierrez may have been alluding to his taser, which appeared to be drawn during the encounter.

Nazario then got out of the vehicle and asked for the officers’ supervisor. According to the lawsuit, Gutierrez responded by knocking him to the ground with “knee-strikes,” before Nazario was handcuffed and questioned. The lawsuit adds that “Gutierrez and Crocker continued to strike Lt. Nazario” even after he was handcuffed and on the ground.

“These cameras captured footage of behavior consistent with a disgusting nationwide trend of law enforcement officers, who, believing they can operate with complete impunity, engage in unprofessional, discourteous, racially biased, dangerous and sometimes deadly abuses of authority,” reads the lawsuit.

“Graduated from Virginia State University. He was commissioned out of their ROTC program. He’s an officer in the United States armed forces,” Jonathan Arthur, Nazario’s attorney told the Associated Press. “These guys decide to do this to him.”

Watch the encounter below: