The Marine Corps May Swap Crunches For Planks On PFT

The Marine Corps is thinking about swapping out crunches for planks, so it looks like the jig is up... 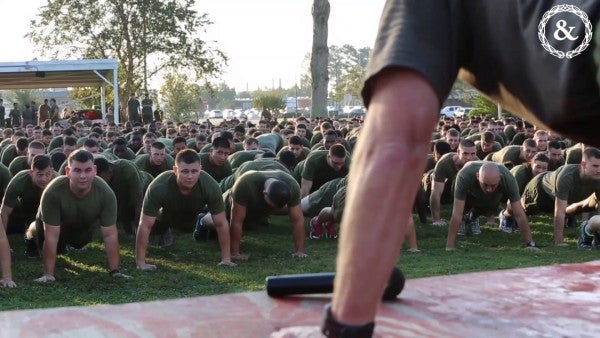 The Marine Corps is considering ditching crunches on the Physical Fitness Test in favor of planks, Shawn Snow of Marine Corps Times reported over the weekend.

The Corps' Force Fitness Division is “currently testing and analyzing the use of planking as a possible measure of abdominal strength for the annual Physical Fitness Testing,” Marine Corps Training and Education Command (TECOM) said in a statement provided to Task & Purpose. “Their testing remains ongoing. There is no additional information available at this time.”

For those of us who remember peeking to the left and right during the crunches section of the PFT and seeing, well, let's call it “questionable form” and “imaginative counting,” from our peers, it seems like the jig is up. At least, that's the thrust of the Marine Corps Times' piece: That swapping crunches with planks might alleviate concerns over cheating.

“There's so many ways to 'game' the 'Marine situp' to cheat the movement while still remaining in standards,” a former Marine sergeant told the Times. “Planks are a good test of overall core stability; they test not just the main ab muscles, but also lats, rear delts, rhomboids, low back, quads, glutes, obliques; everything equally.”

That said, the Marine Corps insists that the possible change has nothing to do with concerns over cheating, Capt. Joshua Pena, a spokesman for TECOM told Task & Purpose.

For those who aren't familiar with them, planks are a pain in the ass core exercise that require an individual to hold their body in a modified push-up position with your arms bent and maintain the pose — usually for a minute or two — though it could be a lot longer if the Marine leading PT is in a foul mood.

It's unclear if the Marine Corps will eventually adopt planks as a replacement for crunches during the PFT, but if it does I have a hunch that Marines of all ranks — yeah, look'n at you gunny — will find a way to “help a buddy out,” during testing.

I'm also confident that there'll be no shortage of blue falcons circling nearby, ever watchful…

SEE ALSO: Male And Female Marine Recruits To Train Together At Parris Island, But Not For The Reason You Think

WATCH NEXT: Commandant Of The Marine Corps Robert Neller Does His Final CFT