What You Need To Know About The New Marine PFT

Some major changes are coming to the Marine Corps physical fitness and combat fitness tests, referred to as the PFT... 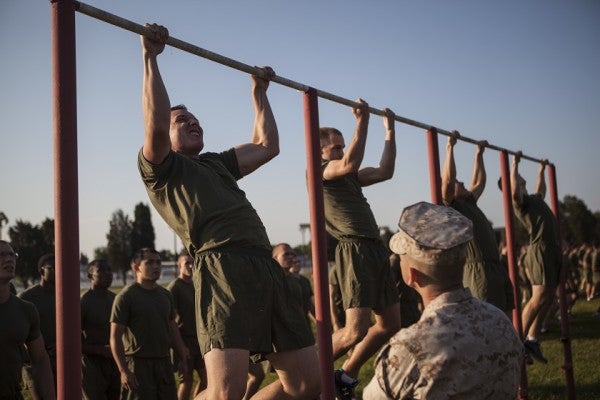 Some major changes are coming to the Marine Corps physical fitness and combat fitness tests, referred to as the PFT and CFT, respectively. Here’s what’s in store for all Marines come Jan. 1, 2017.

The changes start with the elimination of the flexed arm hang, which the the Corps had previously announced it was doing away with.

In its place, all Marines will have the option of doing push-ups instead of pull-ups, but there’s a catch. For those who opt for push-ups, they can only score a max of 70 out of 100 on the PFT, compared to a possible 100 out of 100 for doing the maximum number of pull-ups.

Though all Marines are now being put through the same tests, meaning both men and women must complete pull-ups or push-ups, male and female Marines still have different requirements for a maximum score. The requirements also differ with age.

For those opting to stick with pull-ups: 20 are required for a male Marine to get the maximum score of 100. For female Marines, they need seven.

Here’s where it get’s a little crazy, though. The cap changes with age. As Marines get older, they’ll be expected to knock out more pull-ups. For guys between 21 and 35, they’ll need 23 pull-ups for a perfect score. For women of the same age, they’ll need between nine or 10.

The difference in scoring carries over into crunches as well. For a maximum score, male Marines need to bang out between 105 and 115, again depending on age. Female Marines need between 100 and 110. For the three-mile run however, 18 minutes remains the max score for men, and 21 minutes is the max for women.

The next biggest change is that Marines will be able to take the CFT and PFT multiple times during one evaluation cycle — that weeklong period when the operations shop gets it together long enough to stand by the pull-up bars and ridicule Marines by saying “seven, eight, eight, all the way up, eight, eight, nine.”

Related: Want A Combat Job? The Army Has A New PT Test For You »

Depending on how often a unit or command is able to schedule the tests, Marines may have the option to make multiple attempts. But here’s the rub: Every score counts. So if a Marine get’s a first class PFT but wants to try again — maybe he got 19 pull ups and wants to get that last one for Chesty — said Marine has to keep the score from the most recent test, even if it’s worse than the first.

“Each of the scores are consequential, meaning that the Marine understands the PFT/CFT that they’re taking counts,” Brian McGuire, the head of the Force Fitness Branch at Training and Education Command, told Marine Corps Times. “Although they did their best, they might have an opportunity later in the testing season to do better.”

One of the last major changes is that Marines over 46 years of age will be able to substitute a 5-kilometer rowing test for the PFT’s three-mile run. At the request of the Commandant of the Marine Corps, Gen. Robert Neller, the Force Fitness Branch looked at alternatives like cycling, and walking to replace the running portion of the PFT.

“In the end, rowing was chosen to be the alternate,” McGuire said. “The evidence is quite clear that as people age, the incidence of orthopedic conditions increases. Rowing allows us the ability to assess Marines aerobically in an evidence-based means: It’s a 5-kilometer distance and is similar to running in terms of metabolic demand.”

So that’s what’s in store come 2017. Same tests, but with a few major tweaks here and there, and hopefully fewer sore knees for the old warhorses in the Corps, thanks to the rowing option on the PFT.