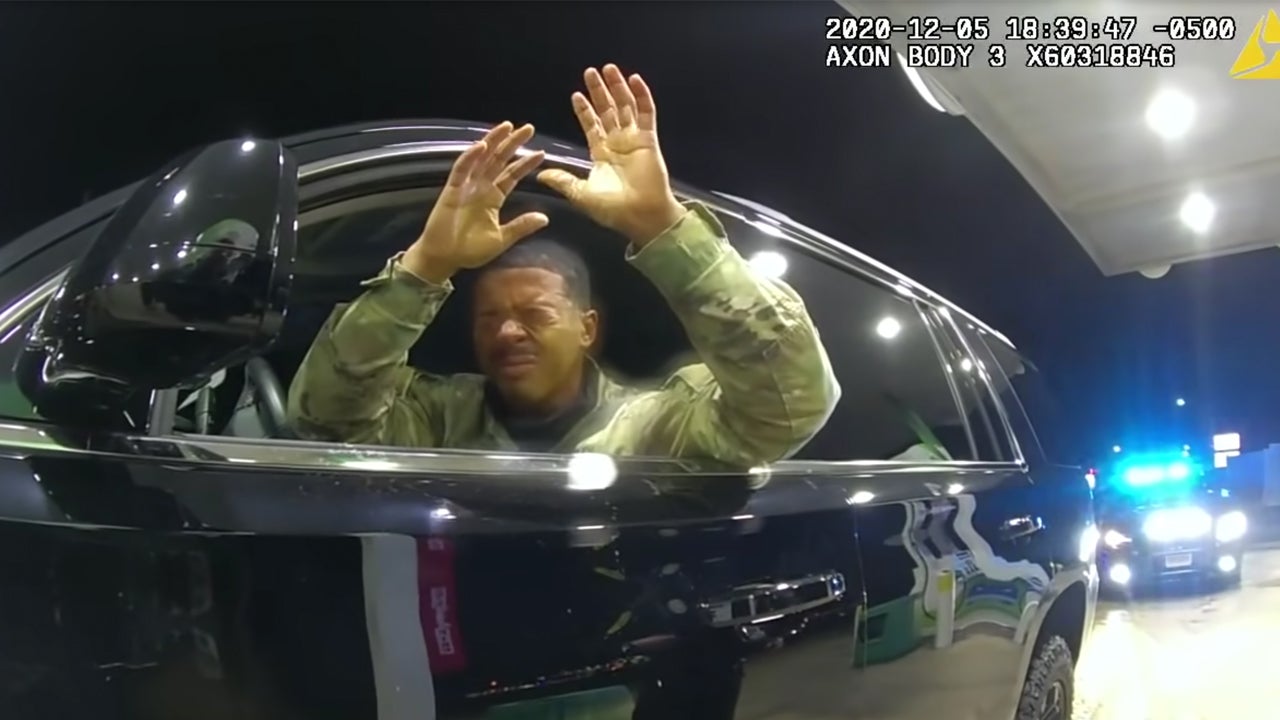 One of the police officers involved in a December traffic stop of an unarmed Army lieutenant driving home in a new vehicle has been fired.

Officer Joe Gutierrez has been terminated according to a press release from the town of Windsor, Virginia. Gutierrez was one of the two officers who drew their firearms on 2nd Lt. Caron Nazario on Dec. 5 after they pulled him over for allegedly driving without a license plate, pepper-sprayed him, and forced him out of his vehicle and onto the ground. Nazario, who is Black and Latino, has since filed a lawsuit against Gutierrez and the other officer, Daniel Crocker, saying his constitutional rights were violated during the stop.

The Windsor press release says an investigation of the incident “began immediately” and found that the Windsor Police Department didn’t follow its own policy. “This resulted in disciplinary action, and department-wide requirements for additional training were implemented beginning in January and continue up to the present,” the release says. “Since that time, Officer Gutierrez was also terminated from his employment.”

It’s unclear when exactly Gutierrez was terminated; the Windsor Police Department has not yet responded to request for comment.

Nazario, Army health services administration officer in the Virginia National Guard’s 111th Field Artillery Regiment, 11th Infantry Brigade Combat Team, said in his lawsuit that he was pulled over because the officers alleged he “did not have a license plate on the rear of his newly purchased Chevrolet Tahoe.” But the lawsuit goes on to say that the vehicle was so new he didn’t yet have permanent plates, and he had “cardboard temporary plates tape to the inside of the rear window of the vehicle at the top and on the passenger side.”

When Crocker initiated the traffic stop, the lawsuit says, Nazario started slowing down and turned on his turn signal but because it was dark he continued to drive “below the posted speed limit” for under a mile until he got to a gas station, where he pulled over. From the time Crocker initiated the stop to the time Nazario had pulled over into the gas station, “approximately 1 minute and 40 second elapsed,” the lawsuit says.

Body camera footage from Gutierrez, who joined Crocker’s pursuit, shows him exiting his car, and he and Crocker approaching Nazario’s vehicle with their weapons trained on the soldier, who is in uniform. Nazario has his window rolled down in the footage and is sticking his hands out the window. The lieutenant repeatedly asks the officers “what is going on” while they both shout over him to “get out of the car.”

“I’m serving this country and this is how I’m treated?” Nazario says at one point.

“Yeah well guess what I’m a veteran too, I learned how to obey,” Gutierrez shouts back. “Get out of the car!”

The two officers eventually approach Nazario and continue to demand that he get out of his car, and Nazario answers, “I’m honestly afraid to get out.”

“Yeah, you should be,” Gutierrez answers, who eventually tells Crocker to back up and pepper-sprays Nazario multiple times, continuing to tell him to get out of the car while he says he’s “trying to breathe.” Nazario’s lawsuit says he was afraid to reach for his seatbelt to take it off as Gutierrez was demanding, fearing he would be “murdered under the pretense of self-defense and officer safety.”

After Gutierrez opens Nazario’s car door, Nazario takes his seatbelt off and asks if their commanding officer is available. Gutierrez continues to scream at him to get on the ground, threatening to pepper-spray him again.

The lawsuit says Gutierrez responded to Nazario’s pleas “with knee-strikes” to his legs, “to force an already compliant and blinded Lt. Nazario down on his face.” The officers placed him in handcuffs and took him away from the car to speak with him, where Gutierrez eventually told Nazario that the problem was that he refused to exit the vehicle, despite telling him in the moment that he “should be” afraid to do so.

According to the lawsuit, Gutierrez and Crocker told Nazario that if he complained “they would be in substantial trouble,” and they “threatened” his job and his commission in the Army “if he spoke out.”

The officers allegedly told Nazario that if he “would ‘chill and let this go,’ they wouldn’t file charges and would take the handcuffs off and let Lt. Nazario go.” The lawsuit also alleges that after the incident and after Nazario left the scene, the officers proceeded to submit “false narratives of the events in their official records … to support false criminal charges.”

The Town of Windsor has requested an investigation of the incident by the Virginia State police, the press release says, and will “continue to provide information related to this event in its commitment to openness.”