As thousands of people crowded the National Mall to watch Donald J. Trump become the 45th president of the United... 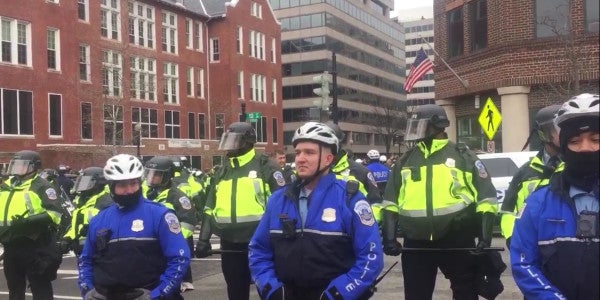 As thousands of people crowded the National Mall to watch Donald J. Trump become the 45th president of the United States, others hit the streets of Washington, D.C., to protest his inauguration — some even resorting to violence.

Images and video surfaced on Twitter Friday morning of protesters smashing windows in downtown Washington of a Starbucks, while police deployed pepper spray against a large crowd.

Protesters take to the streets of Washington ahead of Donald Trump's #inaugurationhttps://t.co/3dAngYF0eY pic.twitter.com/cWx5pKBs4U

According to The Associated Press, an hour before Trump’s swearing-in ceremony, police chased off a group of approximately 100 protesters who smashed windows and called out denunciations of capitalism and Trump. The police, while in riot gear, deployed pepper spray eventually cordoned off protesters, who continued to shout, “Hands up, don't shoot.”

A National Guardsman stand guard in front of a DC building was vandalized by protestors Friday morning, Jan. 20, 2017.Photo by Jennifer-Leigh Oprihory

Thursday night, protests also broke out in Washington in front of the National Press Club where the controversial Deplora-ball was taking place. “The Metropolitan Police Department announced an arrest has been made in a Conspiracy to Commit an Assault offense that occurred in the 500 block of 14th Street, Northwest. After a thorough investigation, it was determined that several individuals made plans to disrupt inauguration activities in an unlawful way,” the police department said in a statement.

Peaceful protests are also ongoing throughout the city. Members of Iraq Veterans Against The War, some of whom were arrested yesterday at Sen. John McCain's office for protesting the appointment of Rex Tillerson as secretary of State, held signs calling for the protection of water. Matt Howard, a Marine Corps veteran, told Task & Purpose that IVAW was there because “it's really important that we should put our voices out there and not just kind of sit by and accept what we see as a pretty disastrous presidency.”

“Inside the military, you’re encouraged to believe that you don’t have any right to be a political person — to have an opinion. That’s not the case, that’s not what democracy is about,” Howard added.

The view near Independence & 7th earlier, where members of IVAW joined other groups in an Inauguration-Day demonstration #Inauguration2017 pic.twitter.com/537RM7pmLM

Despite early clashes between protesters and police, Michael Doyle, a lieutenant with 1st Battalion, 258th Field Artillery Regiment, New York National Guard, said so far the day had been “excellent.” More than 5,000 guardsmen deployed to Washington to support local authorities over inauguration weekend. Doyle said that troops had been thanked by protesters and local business owners, as well as provided with free coffee and food.

“We’re not down here to interject, we're just down here to have people express their First Amendment rights and assist in a peaceful transition of power, which is what happened,” Doyle told Task & Purpose.

Jennifer-Leigh Oprihory contributed to this reporting.