On Jan 21., the day after the presidential inauguration, hundreds of thousands of people from across the country poured into... 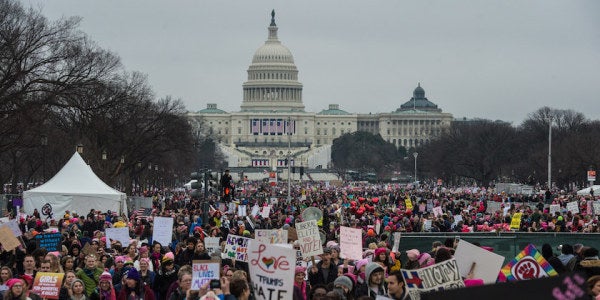 On Jan 21., the day after the presidential inauguration, hundreds of thousands of people from across the country poured into the nation’s capital to participate in The Women’s March on Washington, a protest against the Trump administration that inundated the streets of D.C. with a sea of protest signs and pink hats. Task & Purpose spoke with a group of veterans who participated in the event. All had come to stand in solidarity with the movement and its call for universal rights and equality, which march participants believe are now under threat by the new administration. Of course, each had his or her own personal motivations for marching, too. Here’s a lightly edited version of what they had to say.

“The mantra of the women’s march is, ‘We will not be ignored. We will be seen.’ And who knows that better, who knows how it feels to be invisible better than military women? There’s a Military Times poll that said 55% of active-duty women are scared — it said that, ‘scared’ — of Donald Trump hindering the mission as commander-in-chief. That’s half the population of females in the military.”

“I came out here today for my daughter and her future, because I feel like I need to do everything in my power to change this cultural issue that’s beyond an administration issue. In the military, if you’ve got a good command, you can see it reflected in the people who serve under them. With our commander-in-chief sort of condoning sexual assault and even bragging about it, I’m not going to have my daughter grow up in that cultural environment.”

“In the Marine Corps, we called women Marines ‘WMs’ or ‘walking mattresses.’ The culture is very misogynist, very sexist. So as a veteran, pushing back against that I’m pushing back against misogyny and patriarchy, and sexism to make sure that women are treated with dignity. And not because they’re anybody’s daughter or mother or sister, but because they’re human beings.”

“I joined the military when I was 17. That was before Sept. 11 and I went to boot camp right after thinking that it was going to be a noble fight. It took me being in Iraq the first time and really talking to the Iraqi people for me to realize that we were, in fact, only making things a lot worse. Under Trump, I think we’re looking at another war, and I think the military community is tired of being deployed without any real purpose.”

“I’m out here to stand for justice and equality. I’m here to be an ally to all of the women here and show them that men should be supporting women’s rights and feminism. Patriarchy hurts everybody. I’m also here because Trump is very likely to get more service members killed in senseless wars. I’ve seen a side of the world that most people don’t. A lot of people are really compromising when it comes to the wars, but when you’ve been there, you’re less forgiving. You’re willing to do whatever it takes to stop more wars from happening.”

“Trump doesn’t care about minorities and he doesn’t care about women. He’s openly sexist and he believes the only thing women have to offer is their appearance. The rape culture is something that’s very large in the military. Male elitism is very alive and well in the military. If you’re a woman, it doesn’t matter how well you do your job, people will always say that you managed to accomplish what you did because you’re a slut.”

“I’m out here to stand in solidarity with my brothers and sisters, but mostly for the women, because usually our voices get subdued. I’m hoping for the best. I’m hoping Trump does a good job, but, unfortunately, I don’t think that will be the case. I think the military is going to get even more militarized and service members are going to be used for personal profit, especially if Rex Tillerson takes that seat. I’ve seen the cost of war firsthand, losing friends over there and also back home. War affects the whole community.”

“Folks have tried to create a false narrative that Islam is inherently misogynistic and inherently sexist, and I and other Muslim veterans are here to dispel that notion by standing with our sisters. The oath that I took to uphold and preserve the Constitution of the United States is a big reason why I’m here, because within the documents and tenets of our founding is equal justice under law. That means everybody. On Nov. 8, my mom and I were watching the election together, and when it became obvious that Trump was winning my mom, a naturalized American citizen, asked me, a veteran, ‘What are we going to do if Trump does what he says he’s going to do and comes for us?’”

“This is what I fought for, or at least why I joined — for freedom of speech and the rights of every citizen of this country. I feel right now that a lot of those rights are in jeopardy. A lot of people who are in the most vulnerable positions are at high risk right now of losing basic rights like healthcare and just a general sense of decency. So I think it’s important that military veterans step up. Why should I stop serving my country just because I took off the uniform?”

Nicola Batts | Army spouse and mother of a soldier

“My husband and son are military and Donald Trump has been so reckless with the way that he’s treated Russia, and China, and Korea via Twitter, and it’s really scary to me. I hope that the veteran voice is recognized here, to say that the military community is no more hardened to the cost of war than the average citizen. We feel that loss and that pain the way anyone else would. It’s important to me that he understands that we’re real people and that war isn’t something that should be flippantly flirted with over Twitter.”

“When I got out of the Army I left the country for three years. I’m gay and I couldn’t get married. I deployed and almost died multiple times and I couldn’t even get married. I’m here today to support the people whose lives will be directly impacted by the policies of this new administration. We need to focus on people of color, women, immigrants — they’re not just going to feel the impact of what’s being done in policy, they’re going to feel it from everyone in the country whose ideologies are fed by those policies.”

“When I signed up for the military, I signed up to protect this land and the people and constitutional rights above all else. So I’m marching for freedom and equality for everybody. I think Trump and his cabinet are going to be more worried about their agenda and their investments and not so much what’s best for this country as a whole. I can’t imagine Trump as a commander-in-chief. I’m waiting for someone to say, ‘yeah, we’re just kidding.’”