As many as 934 sailors will soon become intimately familiar with the name Andrew Mills, the namesake for a newly... 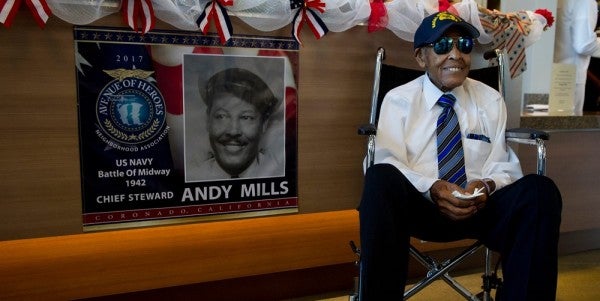 As many as 934 sailors will soon become intimately familiar with the name Andrew Mills, the namesake for a newly inaugurated barracks on Naval Base Coronado, California. And on Aug. 10, Mills, a Navy veteran, trailblazer and World War II hero who risked his life in the face of racial discrimination, was there to meet them.

“Oh beautiful,” the 102-year-old veteran said from his wheelchair during the ceremony, according to the Associated Press. “That’s one of the most beautiful things I’ve ever seen so far.”

Mills, one of the first black sailors to achieve the rank of chief in the Navy, was honored in a public ceremony at Coronado, where he was given a hero’s welcome. “I think I have a lot of friends,” Mills joked during an interview with reporters. “It’s good to have friends.”

Andy Mills speaks with reporters during an Aug. 10 inauguration of Andrew Mills Hall, on Naval Base Coronado, California.U.S. Navy photo.

Naming a building after a living person is uncommon since it must be proven that the namesake demonstrated the Navy's core values — honor, courage, and commitment — throughout their career, not just one specific instance, San Diego Union Tribune reported. It also requires extensive documentation. It's a high standard, but one Mills clearly met — stretching back 75 years to the Battle of Midway.

Related: A Navy Veteran’s Story Of Brotherhood During The Jim Crow Era »

On June 4, 1942, during World War II, Mills was serving aboard the USS Yorktown when Japanese bombers attacked the aircraft carrier. Believing the vessel would sink, the crew abandoned ship.

But two days later, it was still afloat when the call came down — somebody needed to go aboard the badly damaged vessel to recover the ship’s payroll and other documents from a safe. Mills, overhearing one of the officers say, “I need one of those black boys over there” to retrieve the payroll, agreed to go, he recounted during the ceremony. The ship’s paymaster, along with Mills and another steward — a role reserved for minorities in the then-segregated Navy — went back aboard to retrieve the payroll. But even though he had the combination, the paymaster couldn’t get the safe open, so Mills stepped forward and gave it a try. “Click. I went up there and turned it. Click,” Mills said. “Money fell all out of it.”

Grabbing the cash and the other documents, the sailors made their way off the Yorktown. The next day, it was attacked again by the Japanese, and sunk on June 7.

The decision to name the new barracks came after the commanding officer of Naval Station Coronado at the time, Capt. Stephen Barnett, met Mills two years ago in San Diego at a parade.

“He wasn't treated like his shipmates but it never stopped him from his duty — a duty he carried out with courage, honor and commitment,” Barnett told the crowd at the ceremony. “And that remains a cornerstone of his character now.”