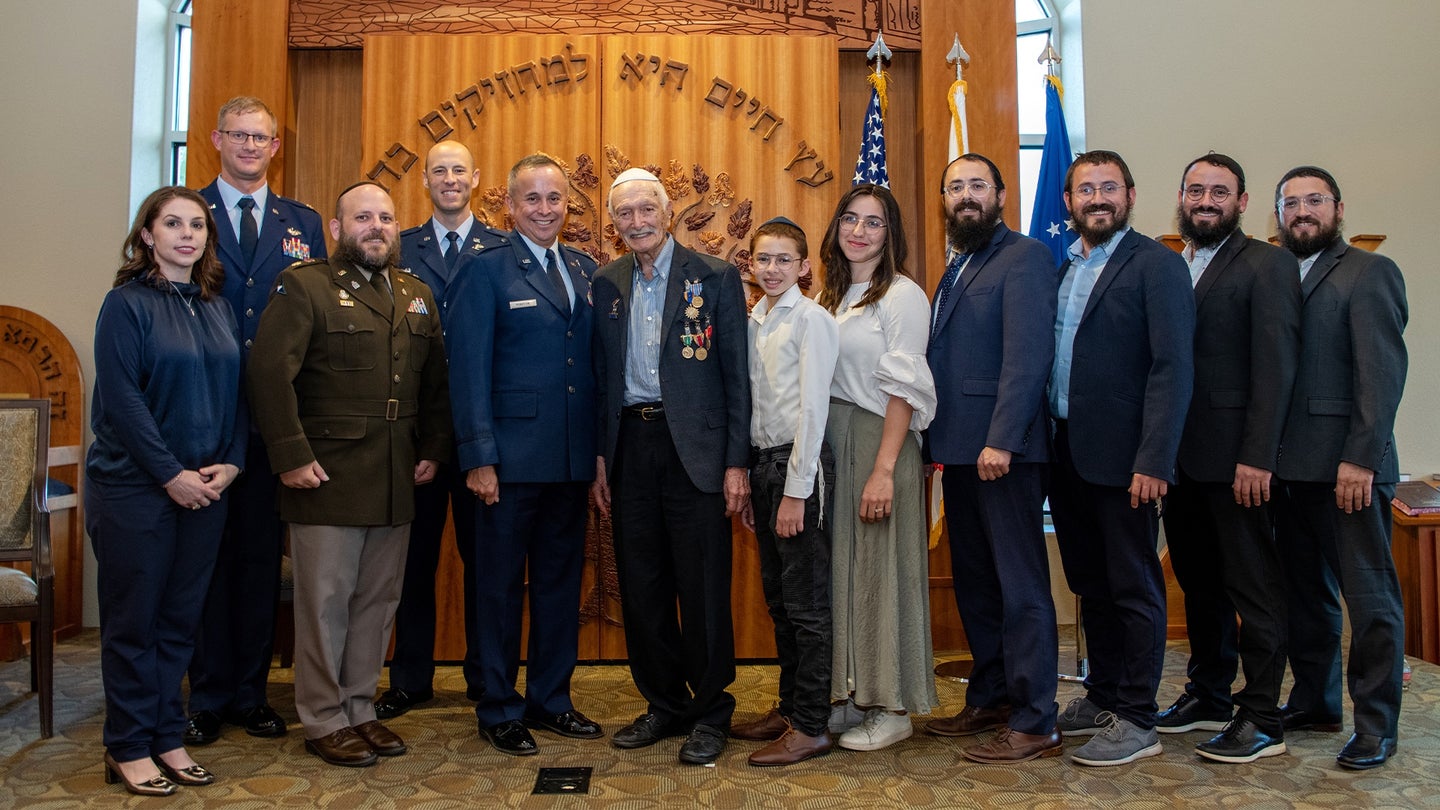 In 1945, Gerald Teldon was 20 years old and piloting a P-47 Thunderbolt over the skies of southern Europe, flying escort missions and supporting ground forces. It would take seven decades, though, to receive any formal kind of recognition.

During a ceremony last week at the Chabad Center for Jewish Life & Learning in San Antonio, Teldon, now 97, was presented with six medals he earned while serving as a fighter pilot during WWII.

“Lt. Teldon flew 62 combat missions over a period of two years in the European theater and, while he should have been recognized for his service when he was honorably discharged, I’m thankful that he will finally get that recognition in front of so many friends and family members,” said Lt. Col. Andrew Stein, commander of the 502nd Operations Support Squadron and one of the presenters.

However, he was discharged in 1946, without ever having actually received any of the awards he’d earned. Teldon said he had periodically inquired about them, but had never met with any success.

The ceremony was organized by some of Teldon’s family members. It was a bit of a surprise for the former pilot, as he had traveled to San Antonio, Texas to attend his great-grandson’s bar mitzvah. When he arrived, though, there were four generations from his family as well as military representatives from nearby Joint Base-San Antonio on hand to finally present the awards and pin them to his jacket.

“I never realized the results of what was happening that I was doing,” Teldon said. “I was a fighter pilot, and as a fighter pilot, you never see the action that resulted from what you did. And now when I received these medals and they announced what the reasons for the medals were, I was absolutely amazed that I was involved in that.”

Teldon was born in the Bronx and grew up on Long Island with his parents and sister. During the ceremony, he recounted his family at times having to stay on someone’s back porch. Since winning a newspaper selling contest when he was 15 and being rewarded with a flight around New York City, though, Teldon knew that he wanted to become a pilot.

“I was so amazed and excited, flying around the city, that I decided that I wanted to become a pilot,” he said.

He was initially turned down by the Navy, but in 1944 he enlisted in the Army and, despite a possibly punctured eardrum, completed his pilot training.

Deploying to the Mediterranean, he completed 62 combat missions in the P-47 Thunderbolt with 85th and 87th Fighter Squadrons.

Now, more than 75 years after his discharge, Teldon is one of fewer than a quarter million WWII veterans still alive. Thankfully, 25 of Teldon’s descendants were able to see him finally recognized for his accomplishments in person.

“I’m not an emotional person, but I’m so thankful for my family to want to learn more about me as to who I was that led me to be who I am today,” he said.