The National Enquirer, that hallowed bastion of journalistic integrity that loves Donald Trump so much that it once bought a... 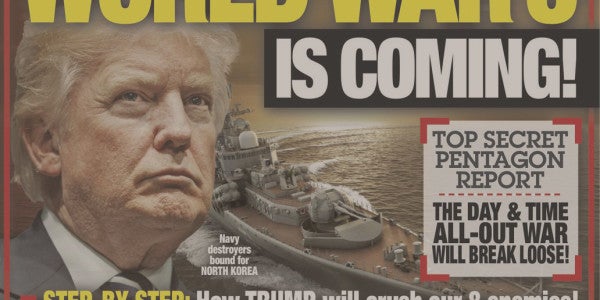 The National Enquirer, that hallowed bastion of journalistic integrity that loves Donald Trump so much that it once bought a story about one of his affairs just to make sure it never saw the light of day, showered itself in glory today with a bold new pro-Trump cover story. Trump, you see, is going to wage — and win — World War III. What’s even more amazing is that, according to the Enquirer’s cover, he’s going to do it with a Russian destroyer.

Hmm. Is that “Navy destroyer bound for NORTH KOREA” a Burke class destroyer? A Spruance? A Zumwalt, maybe?

Reader, it is not. That there is a Sovremennyy-class destroyer of the Russian Navy.

To be more precise, the Enquirer’s photo is a computer-enhanced rendering of a Sovremennyy, by an English ship-modeling hobbyist, meant to show other model-builders the Russky sub-hunter’s array of antennae and standing rigging:

Fun fact: The Russian ship model is made by a company called Trumpeter. So there’s that.

Was some photo intern trying to make a sly, subversive comment about Trump and Russia at an outlet that outwardly beatifies the POTUS? Was it just a lazy oversight? Did Enquirer bother getting the rights to that pic? Who the hell are “our 8 enemies,” anyway? And why did the Enquirer bury online news of its groundbreaking Pentagon “top secret report” below headlines about Charlie Sheen, Robert Durst, and Bill Cosby?