A U.S. Army second lieutenant was stabbed to death on the University of Maryland campus over the weekend in what... 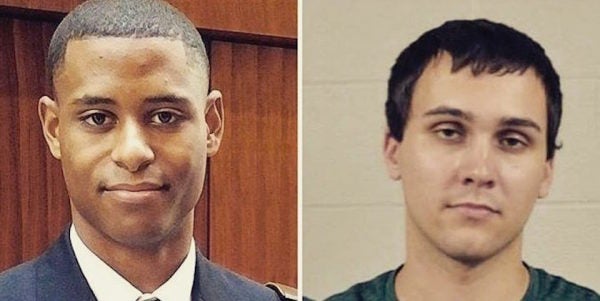 A U.S. Army second lieutenant was stabbed to death on the University of Maryland campus over the weekend in what authorities suspect was a hate crime, The Baltimore Sun reports.

The victim, 23-year-old Richard Collins III, was reportedly visiting friends on the campus from Bowie State University, also in Maryland.

Police have charged Sean Christopher Urbanski, a 22-year-old University of Maryland student, with murdering Collins. Police began investigating the racial dimension of the murder after police reportedly identified Urbanski as a member of a racist Facebook group. (Collins is African-American; Urbanski is white.)

Surveillance cameras captured what police called a “totally unprovoked attack,” which took place on the morning of May 21 around 3 a.m.

U-Md. Police Chief David B. Mitchell told The Washington Post that Collins and two friends were waiting for an Uber on campus when Urbanski approached the group.

“Step left, step left if you know what’s best for you,” Urbanski said, to which Collins replied, “No.”

Urbanski then plunged the blade of a folding knife into Collins’ chest.

Collins, who died at a hospital, was a member of the Bowie ROTC and had been commissioned in the Army on May 18. He was due to graduate college this week and begin his career as an Army intelligence officer, following in the footsteps of his father, a military veteran.

“He wanted to be a general of the United States Army, that was his goal,” Vidal Adam, Collins’ friend, told the Sun. “He was the definition of a leader. I can’t really say the same about a lot of people.”

Urbanksi was arrested at the scene. Police had initially said that race played no role in the killing, but started to suspect otherwise after becoming aware of Urbanski’s involvement in a Facebook group called “Alt-Reich Nation.” The FBI is assisting with the investigation.

“When I look at the information that’s contained on that website, suffice it to say that it’s despicable, it shows extreme bias against women, Latinos, persons of Jewish faith and especially African-Americans,” Mitchell said.

Collins’ murder was the first homicide at the University of Maryland in decades, but the killing occurred amid a series of racist incidents on the campus, including the discovery of a noose in a fraternity house earlier this month and the distribution of nationalist fliers earlier this year.

“It is your civic duty to report any and all illegal aliens,” one flier said, according to the Post. “They are criminals. America is a white nation.”

Witnesses told police that Urbanski was intoxicated at the time of the attack, and police said that the suspect and victim did not know each other. Urbanski has not told police any motive.

Meanwhile, those who knew Collins are mourning the death of a young man they believed was destined for a great future.

“The parents are totally devastated that their young son, that was at the peak of his career about to take off, and his life was taken away senselessly,” Rev. Darryl L Godlock, a spokesman for the Collins family, told the Post.

In an interview with the Sun, Godlock described Collins as “a very caring individual.”

“He was highly intelligent and he was at the peak of his career,” he said. “He loved his family, he loved people that he came in contact, and more importantly he loved his God.”

A bond hearing for Urbanski is scheduled for May 22.