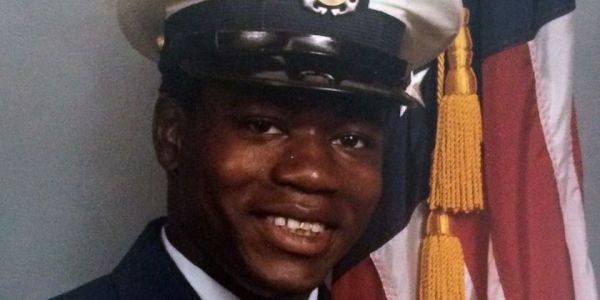 The white North Charleston, South Carolina police officer who shot and killed an unarmed African-American Coast Guard vet in April 2015 was sentenced to 20 years in prison on Dec. 7, the New York Times reports.

Officer Michael Slager, 36, shot and killed Walter Scott when the latter exited his car and fled on foot during a daytime traffic stop. Slager unsuccessfully tried to stop Scott with his taser, which turned into a scuffle, and as he tried to flee again, Slager shot Scott eight times in the back. Eyewitness video of the incident quickly viral, shining a national spotlight on the case.

The video, which showed Slager unloading at Scott from some 15 feet away, revealed that the officer lied on his subsequent police report about the circumstances of Scott’s shooting, including his assertion that officers performed CPR and applied first aid on Scott as he lay face-down on the ground; though Scott’s toxicology report revealed cocaine and alcohol in his system, family said he likely fled due to fears over an arrest warrant over late child-support payments.

Slager pleaded guilty in May to violating Scott’s civil rights, stating during his plea hearing that he “used deadly force even though it was objectively unreasonable under the circumstances,” according to the New York Times.

Scott, who was 50 at the time of his death, served two years with the U.S. Coast Guard Yard at Curtis Bay south of Baltimore, Maryland. According to the Baltimore Sun, Scott served as a fireman apprentice after enlisting in 1984, focused on the operation and maintenance of a vessels’ electrical and propulsion systems; two years later, he was involuntarily separated through a general discharge “due to a drug-related offense.”

Ironically, Slager himself worked as a fireman in the Coast Guard: The Baltimore Sun notes that he enlisted in January 2003 and served at Coast Guard Station Cape Canaveral until his discharge exactly six years later in 2009. But according to the service records provided by the Coast Guard shortly after the shooting in April 2015, Slager separated as junior enlisted, suggesting his rank remained stagnant during his tenure with the branch.

“It's possible he got rated and then through nonjudicial punishment or court-martial was reduced in rate back to E-3, but that is just speculation,” retired Coast Guard Capt. Jim Howe told Navy Times, adding that, despite the possibility of an NJP or medical setback, Slager’s career appeared “very curious.”

The shooting, which occurred less than a year after the deaths of Michael Brown in Ferguson, Missouri, and Eric Garner in Staten Island, New York, sparked a national debate over the violence white police officers use against African-Americans after eyewitness videos of the incidents went viral. In those two cases, the police officers involved in the incidents were cleared of wrongdoing despite raw video evidence that suggests otherwise, stoking frustration over police accountability and unconscious racial bias in the legal system.

Scott's death serves as “a grim reminder of the urgent need for criminal justice reform,” National Association for the Advancement of Colored People President Cornell William Brooks told the Baltimore Sun shortly after the shooting. “Scott was a father of four and a veteran of the U.S. Coast Guard whose life was senselessly cut short due to a tragic encounter with the police.”