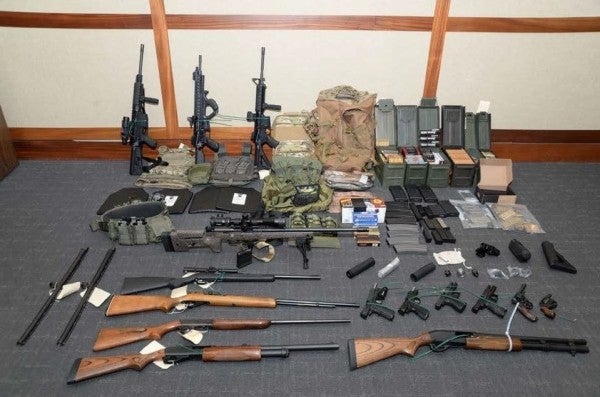 The Coast Guard lieutenant accused of amassing an arsenal of illegal firearms and plotting the murder of Democratic politicians and high-profile broadcast journalists hasn't actually been charged with domestic terrorism, according to a Monday court filing.

Lt. Christopher Hasson, a self-identified white supremacist for “30 plus years” who was arrested on Feb. 15 for firearms and drug possession, was labeled a “domestic terrorist” in a February indictment by federal prosecutors, who alleged that Hasson “intends to murder innocent civilians on a scale rarely seen in this country.”

But in Monday court filing, Hasson's attorney Liz Oyer requested U.S. Magistrate Judge Charles Day to release her client from federal custody given that federal prosecutors not only didn't charge him with domestic terrorism, but have no plans to do so in the future.

Day had previously stated during a Feb. 21 hearing that, despite “clear and convincing evidence” that Hasson was a danger to the public, prosecutors had 14 days to actually charge him with domestic terrorism before he would reconsider the lieutenant's detention

“An indictment was returned on February 27, 2019, charging Mr. Hasson with the same two offenses that were initially charge by the complaint (a firearms-possession offense and a misdemeanor drug-possession offense, plus two additional firearms offenses,” Oyer wrote.

“No other crimes have been charged. Moreover, during a recent status call, government counsel advised the Court and defense counsel that it does not expect to file a superseding indictment in the matter.”

A search of Hasson's home following his arrest in February revealed 15 firearms and over 1,000 rounds of ammo along with a hit list of targets that included including prominent Democratic politicians like Senate Minority Leader Chuck Schumer, House Speaker Nancy Pelosi and media personalities like MSNBC's Joe Scarborough and Chris Hayes.

In a draft email that he later deleted, Hasson allegedly wrote that “iberalist/globalist ideology is destroying traditional people esp white,” adding that he was “dreaming of a way to kill almost every last person on the earth.”

Law enforcement also found a draft letter Hasson wrote to a neo-Nazi leader weeks after the 2017 Charlottesville white supremacist rally, in which he called for a “white homeland.”

Hasson was assigned to work at Coast Guard headquarters in 2016 and previously served in the Marine Corps from 1988 to 1993.