“My aunt asked me, ‘Who are these guys in a military uniform?’ And I’m like ‘Oh, that’s my Uber driver.'" 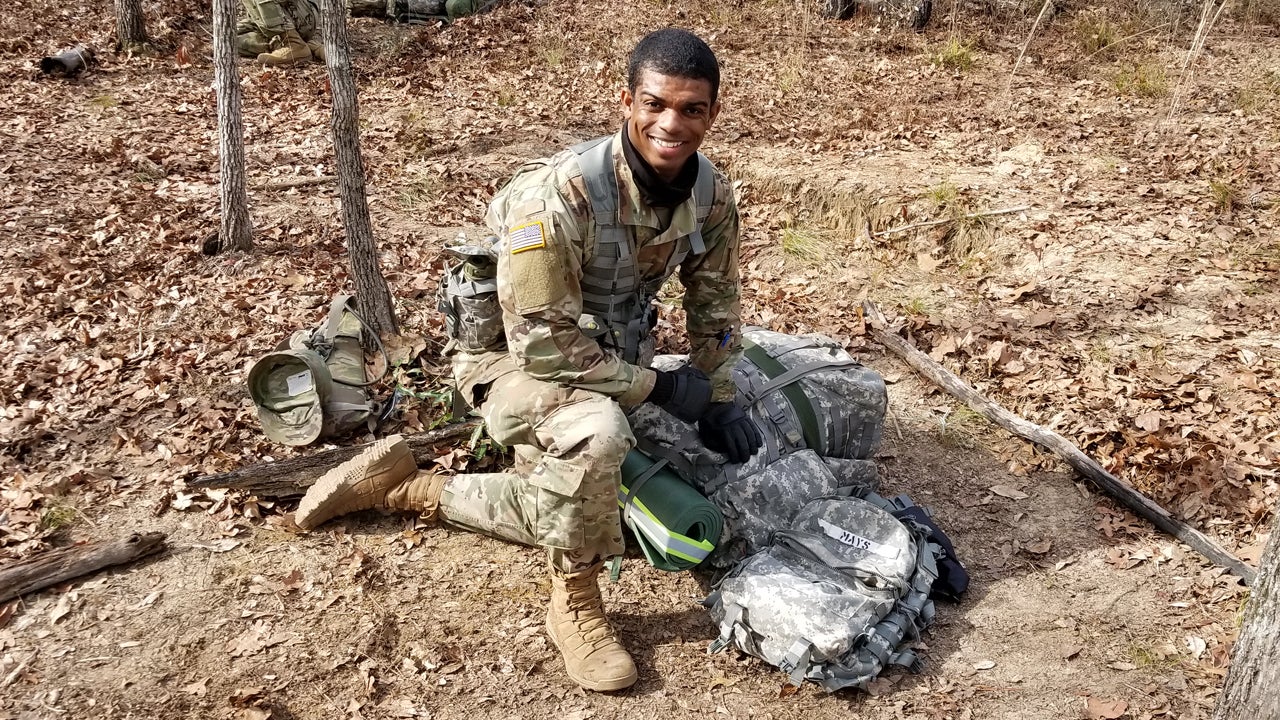 Christian Mays wanted to serve in the U.S. military since he was in middle school.

One of a handful of students selected to lay a wreath at the Tomb of the Unknown Soldier during a trip to Washington in 2006, Mays points to laying that wreath down at Arlington National Cemetery as a defining moment that helped him realize he wanted to be a soldier. But despite it having such an impact on him, he kept it from his family until they read about it in a school newsletter. Even as a kid he knew they weren’t supportive of military service; they wouldn’t have understood.

Ultimately, that didn’t stop Mays. A decade later he opted to go through what he called “9 months of hell under the radar” in a recent thread on Twitter, revealing how he pulled off an elaborate, months-long scheme to get through basic training and officer candidate school without his family’s knowledge, all with the help of his recruiter and a Gulf War veteran.

“It was an adventure,” tweeted Mays, now a first lieutenant in the Army Reserve. “A hell of an adventure.”

In fact there’s only one thing Mays wishes he did differently: joining the Army sooner. He said in a phone call on Monday that while his grandfather served in World War II, his family had a “very negative perception” of military service that stemmed from the Vietnam War. Their lack of support for military service only grew more severe with the beginning of the war in Iraq, and after his grandfather’s death they became more vocal about it.

Mays recalled another time in 2007 during the height of the Iraq War surge when he was in high school and brought home a brochure from the Marines. “She wasn’t going to bury a child,” Mays said of his mom’s strong objection to his joining the military.

Instead, Mays “repressed” that part of him, went to college at the University of Michigan and tried out for football, joined the student government, and did all of the things he knew his family would support. While the idea of military service stayed in the back of his mind, he kept “kicking the can” throughout college, pushing it back, focusing instead on an eventual career in law.

There was another thing keeping Mays from serving that he had been keeping hidden from his family: his sexuality. Mays, who is bisexual, said he was confronted about his sexuality by his mom in July 2015. It “wasn’t really pleasant,” he said, and it resulted in them no longer talking at all. He moved out of the home of his parents and instead went to live with his great-aunt.

While the military’s “Don’t Ask, Don’t Tell” policy was no longer in effect at that point, Mays said he was still worried about the military’s culture and whether he’d face intolerance and harassment if he joined. He wondered if he was really ready to walk into that kind of environment after trying to get away from it within his own family.

He finally began the application process to join the Army in January 2016, but abandoned it after getting a job with Hilary Clinton’s presidential campaign. He said he left the application vacant for most of that year while he worked on the campaign, until she lost the election that November and he found himself back at square one.

Then in December 2016, Mays got a call from a recruiter at the station he’d started his application at, asking if he was still interested in joining.

He went back to the recruiting station without telling any of his friends or family and finished his application to join the Army Reserve and go to officer candidate school; he recalls the recruiter asking him if he was sure he didn’t want to join active duty, saying a lot of people end up wishing they had. But Mays was thinking about damage control — the Army Reserve could be more easily accepted by his family than active duty, he thought, so he stuck by that plan.

There was still one major question, though: How would he be able to go to basic training and officer candidate school without his family knowing?

So he and his recruiter “hatched a plan.” He told his family and friends that he was going to be moving to Washington, D.C. for an internship with his congresswoman, Rep. Brenda Lawrence (D-Mich.), who he’d interned for at the local level while he was in school. It was an intense internship, he told them, so he may not be available for texts or phone calls.

A friend of his, a Gulf War veteran, was also in on the plan; Mays left him his MacBook when he left for basic training, and he’d agreed to occasionally log on and respond to text messages as if he were Mays, to avoid stirring up suspicion back home.

Mays went before the OCS board and was sworn into the Army on March 3, 2017. A few months later in August, he was packing to leave for basic and OCS at Fort Benning, Georgia. When the day came for his recruiter to come pick him up and ship him out, Mays’ great-aunt was a little confused. He was supposed to be going to DC for months, after all, but he was only packing a backpack, and then his recruiter came to pick him up and he was in an Army uniform.

“My aunt asked me, ‘Who are these guys in a military uniform?’” Mays recalled. “And I’m like ‘Oh, that’s my Uber driver, I’ve gotta go to the airport, I guess he’s working part time or whatever.’ They ate it up. I said my goodbyes and off I went.”

It was (mostly) smooth sailing from that point on — aside from a few hiccups. After arriving at basic training, when soldiers are typically told to make a brief phone call to their parents and give them their mailing address, Mays told his drill sergeant that he didn’t have anyone to call, because no one knew he was there. But they didn’t buy his story and made him hold his bag over his head until he called someone. Mays called his recruiter instead and rambled off what he was instructed to say to his parents.

The drill sergeants realized he wasn’t joking when he never received a letter or care package like the other trainees. They asked him again if it was true that no one knew he was there; he said it was, and they “thought it was the funniest thing they’d heard” in years.

He carried on with his plan through OCS, and eventually he had more phone access than he did during basic. He started interacting a bit more with people reaching out to him, trying to “keep the ball rolling.” Other soldiers he was training with started finding out what his story was and began placing bets on how long they thought he’d be able to keep the secret.

Mays was preparing to finally graduate from OCS in March 2018 when a friend from college reached out and asked if he could come visit in D.C.

“It’s not that I don’t like you, it’s just that I’m really busy!’” Mays recalled telling him, sticking to his cover story of a congressional internship.

But his friend knew the congresswoman and people on her staff. Why hadn’t anyone seen Mays? The cat was out of the bag, so Mays invited his friend to his commissioning ceremony. He was the only person Mays knew who came to support him.

The ceremony was “a really good moment,” Mays said, so he decided it was time to fill the rest of the world in on what he’d accomplished. After posting a few photos on social media, he was bombarded with texts and messages from friends and family for days. His dad was so shocked he thought he picked up the uniform “at some store.”

His family still wasn’t very pleased with his choice, but at that point it was too late: Mays was officially 2nd Lt. Christian Mays.

Since then, Mays and his mom have started rebuilding their relationship, and he’s hopeful about the direction they’re heading in. While his family is proud of him and fine with hearing the occasional news about his service, he knows they’re still not warmed up to the idea. Like many families, they worry about him.

And while he’s still interested in a legal career, he’s also moving closer and closer to going active duty. Being a soldier is something he loves and enjoys, and he finally realized this year that he wants to be a part of the change happening in the Army to help people “feel seen and feel heard,” he said.

Though he’s had to confront the occasional homophobic comment or “joke” from other soldiers, his initial fears about joining haven’t panned out, he said, because his generation has been far more tolerant than what he expected. While the military still has a ways to go in addressing things like racism, homophobia, and sexism in the ranks, he also knows the military has made big strides in improving its culture since his grandfather served.

And today, Mays said he’s the happiest he’s been in “a very long time.”

“It feels like I found my purpose and it’s something that has been very hard for me, it took me a very long time — we’re going on what, 10-15 years of should I or shouldn’t I,” Mays said. “And I kick myself a lot because I feel like I’d be much further … if I had just stepped out in faith and had more courage.”