Finding Balance: How A Navy Reservist Serves His Country While Succeeding At Discover Financial Services

For David Oppenheim, life is all about balance. He juggles his military service, his civilian employment, and his family. Oppenheim’s oldest... 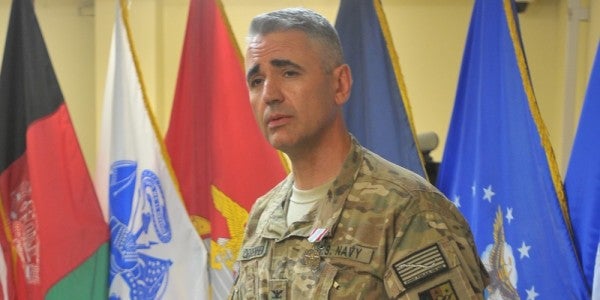 But with careful consideration and hard work, he has achieved a harmony that works perfectly for him.

Oppenheim has spent the past 25 years serving his country in the Navy’s Judge Advocate General Corps, or “lawyer staff corps,” where he currently holds the rank of Captain. At the same time, for more than 18 years, Oppenheim has worked for Discover Financial Services, where he holds the title of vice president and assistant general counsel. Managing these careers at the same time has not been easy, but Oppenheim has found a company that supports his military career as much as his civilian one.

It seems natural that Oppenheim gravitated to a career in the Navy. “I have always had a desire to serve a larger purpose,” he said. At age 6, Oppenheim informed his mother that he wanted to join the military. During his first year of law school, Oppenheim met a neighbor who was a Marine Corps JAG. He told Oppenheim about the program and encouraged him to apply.

While in high school Oppenheim successfully screened for the Navy’s nuclear program, but was unable to move forward because he did not meet the vision requirements. Not to be deterred, after learning about the JAG Corps, he was able to obtain a medical waiver and was commissioned as an ensign in 1993. Oppenheim credits this experience as one of his biggest lessons in perseverance.

After completing his initial four-year active duty commitment, Oppenheim decided that he wanted to practice law in the financial services industry. However, his passion to serve his country remained; and continuing his service in the Navy Reserve allowed him to do both. It was the “best of both worlds,” as he puts it, allowing him to follow his two passions.

In 2000, Oppenheim’s path led him to Discover Financial, and as he described it, “the company felt immediately familiar.” “Discover’s culture and values are very similar to the military,” he said. “Respect, teamwork, and integrity are core values. Discover didn’t model itself after the military; they happen to have similar values, and that made the transition from the military to the civilian sector so much easier.”

“Discover Financial is extremely supportive of those who serve in the military,” he added. “They offer more than the law requires because they care about their military employees.” In 2012, while Oppenheim was serving a year in Afghanistan with the Navy Reserve, Discover Financial went above and beyond by paying the difference in his salary for the entire year he was gone. This gesture helped ease the burden on Oppenheim’s family during his time away.

Another benefit that he loves about Discover Financial is that they do not require the use of personal time off while fulfilling Reservist duty. Oppenheim has been able to meet his two-week obligation to the Navy Reserve every year while saving his paid time off for quality time with his family.

Oppenheim is quick to point out how his military career has positively affected his civilian career. “I consider myself a student of leadership,” he said. “Being in the Navy has allowed me to learn from the great leaders in all branches and at all levels. I have learned as much, if not more, from chiefs as I have from admirals and generals.” Oppenheim has used this background to his benefit in the civilian sector.

“The lessons of leadership, teamwork and resilience happened organically and at a much earlier stage of my career in the military than would have been possible in the civilian sector,” he said. “They set military experience apart from civilian experience.”

As part of Discover’s diversity and inclusion program, it offers a veteran’s employee resource group that directly benefits military veterans and their family members who work for Discover. The company recently put on a veteran hiring panel to showcase the unique and diverse attributes that veteran employees bring to the table. A dedicated military recruiter seeks the most qualified military candidates to bring on board. The company employs many military spouses through its Military Spouse Work at Home program. In it, military spouses gain a portable career that allows them to work directly with Discover Financials’ military customers, connecting them with an employee who can relate to their circumstances.

Discover Financial also recently began participating in the U.S. Chamber of Commerce’s Hiring Our Heroes program, which allows active duty members to “deploy” to Discover Financial for a 12-week fellowship prior to leaving the service. “During that time, the active duty member gains valuable experience and information that will help them pursue a civilian career,” Oppenheim said.

Oppenheim knows that the transition from full-time military to civilian life can be daunting, but there are concrete actions to take to be better prepared. “The first step is to learn about and utilize the many transition assistance programs available,” he said. These programs can help veterans translate their military experience into a language that civilian employers can understand.

Next, Oppenheim suggests seeking out mentors who have successfully navigated the transition from military to civilian employment. He also suggests “proactive networking” through platforms such as LinkedIn. Job seekers should “identify veterans at specific companies who may be able to offer assistance and support during your transition.” Oppenheim noted that, once you secure civilian employment, “many companies, like Discover, offer veteran employee resource groups and mentorship programs.”

Finally, for those veterans struggling to find their sense of purpose in their civilian careers after leaving the service, Oppenheim offered that “I would urge them to consider the fact that a strong economy and civilian sector make it possible for us to have a strong military to defend our freedom and way of life, and by contributing to the strength of our economy and of our civilian sector they are still serving our nation in an important way!”

After 25 years in the Navy and 18 years with Discover Financial, Oppenheim is one of the great success stories. In that time, he has ascended within both organizations while offering a helping hand to others looking to do the same — all while maintaining balance.