"All of my inspirations for wanting to do good things ... to contribute something positive to the world, was born on the battlefield." 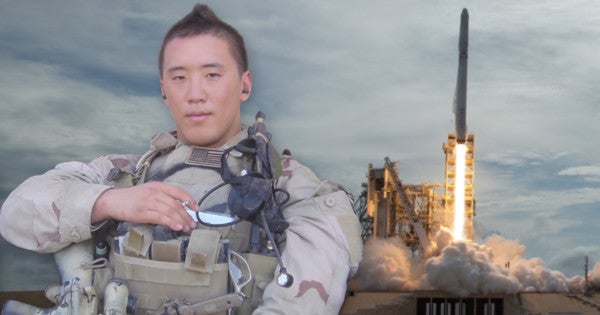 Navy Lt. Jonny Kim
went viral last week when NASA announced that he and 10 other candidates (including six other service members) became the newest members of the agency's hallowed astronaut corps. A decorated Navy SEAL and graduate of Harvard Medical School, Kim in particular seems to have a penchant for achieving people's childhood dreams.

Task & Purpose: What made you go for the Navy SEALs rather than Special Forces or Marine Force Recon or something like that?

Jonny Kim: The military for me was never in the picture. My parents wanted me to go to college and get a well-paying job from there, but there's something inside of me that knew I just wasn't ready for that and I didn't want to do that. And I wanted to be a part of something bigger than myself.

I was in martial arts class when I was 16 years old and my friend Keith, who I went to Santa Monica High School with, told me his life goal was to be a Navy SEAL. I'm trying to set the scene that this was 1999, before 9/11, before anyone knew what a Navy SEAL was.

When I listened to Keith talk about this passion, this dream, it was so inspiring to me: a group of warriors that worked in the night that had the hardest military training, and did these operations that no one else would or could do. The most important part of it was that they never sought recognition or advertised the nature of their work. And it was so profound, that level of humility, and professionalism, that I knew that that's what I wanted to do.

I had heard about the Special Forces and I didn't really know much about Marine Recon … but there was something that enamored me about the training to be a SEAL, and about Hell Week and all these grueling tasks that I felt that I needed to do.

And a lot of it was for my own selfish needs, like I needed to discover myself and my identity. I didn't really know who I was, and I didn't really like the kind of person that I was growing up to become. And I thought that this was a drastic move for me to kind of reset my life, to reorient what I wanted to do or what I thought I could.

I mean, I don't know how appropriate it is for me to go into detail, but I didn't … I didn't have the most stable childhood. And I think a lot of my insecurity and my inability to talk to people and form close relationships stemmed from just childhood instability. That's a large reason why I didn't have big dreams growing up. I didn't have that type of healthy confidence or security, and also maybe this kind of inner frustration that I know I can do something I just, I just need to believe in myself. And I didn't have that.

For me, becoming a SEAL, it was the biggest reset.

T&P: Just to make sure I'm following you … are you talking about not having many resources growing up, and feeling like you didn't have many options because of that?

Certainly not financial resources. We were middle class; it would be inaccurate to say that I came from a poor household. But the familial relationships we had in the home were a little unstable. And I think that led to a lot of low confidence growing up.

I'm naturally a pretty private person. But I understand that … I almost owe it to the next generation of children. One of the biggest reasons why I wanted to be an astronaut was I wanted to be able to inspire young kids.

I feel I owe a duty that I am a little bit more open about where I came from. Because I want young kids to understand that they're capable of achieving their hopes and dreams even if they didn't come from the best place.

I don't think I've ever been asked that. I think it's a very profound and astute question. Yes, I think as a naive 18-year-old kid, when I first joined the Navy, I had these grand dreams of going to combat and expecting it to be a certain way, maybe influenced by what I had seen in Hollywood movies or read in books.

But war was not anything that I thought it would be. And it was ugly. And it was painful. And there was a lot of suffering.

And I did find a lot of good out of it. There were some of the most compassionate acts that I've ever seen of love for your fellow man and woman. It gave me a perspective that I don't think I would have achieved any other way. This perspective of the ugliness, but at the same time the beauty of humanity gave me a lot of hope that we can make this world into a better place.

A lot of my inspirations, really all of my inspirations for wanting to do good things in my lifetime, to contribute something positive to the world, were born on the battlefield. I would have to say all of it was.

I mean, I miss my friends dearly that I'll never see again. But I wouldn't trade these experiences for anything.

T&P: I'm new to covering the military beat, and I'm surprised that could be taken away from the battlefield experience, like after seeing all that ugliness and wanting to do something profoundly helpful for people in the world.

Is it okay if i share a story with you?

T&P: Sure, I was about to ask for one, go right ahead.

I think one of the greatest acts of love that a human can show for another is to sacrifice themselves for the life of another … and that happened many times. One time that was profound for me, was a young man named Michael Monsoor, who was operating on a combat mission in Ramadi, on September 29, 2006.

A grenade was thrown into his general area and he was the only person among his teammates that could have escaped the blast without harm. But instead, he jumped on a grenade, smothered it completely with his body, absorbing all the impact and died from that last act. And he didn't have much time to make that decision.

I would like to think that I would do the same thing if I was in the same position, but I don't think anyone knows, until they are thrust into that position, what they would do. I know Mike was scared. I know he didn't want to die. But I am so inspired that the love he had for his fellow teammates was greater than his fear of death. And to me, that is an inspiring act that has stayed with me.

There's not too many places I've seen that act of love for someone else.

T&P: You deployed to Iraq twice, and it sounds like they were incredibly difficult deployments to Ramadi and Sadr City … How did that path lead you to become an officer and move on to medical school?

I was the combat medic of my platoon and I had the fortunate opportunity to treat my fellow platoon mates, civilians and sometimes the enemy. But there was a limit to what I could do to help people. I was trained to stabilize patients long enough for them to reach a hospital and be treated by a physician, a surgeon, as the definitive care. And I was inspired a lot by the physicians that I worked with. I know a lot of my friends owe their lives to those doctors and their medical staff.

I made promises to a lot of the people that I lost, that I would spend the rest of my life doing something good, something positive for the world, because they left a void when they died, and I know that they would have been successful, making the world a better place had they lived. Those are big shoes for me to fill. At that point in time, I felt medicine was a good platform to spread that goodness, to leave that positive contribution.

T&P: I imagine it must have been a sharp pivot to go from the SEALs, this very intense fraternity, and then go into a civilian setting like Harvard Medical School….was that a difficult transition for you?

It was. It was probably one of the more difficult things for me. It's a different set of tools you need to be successful in the SEAL teams versus in a civilian institution. As much as I like to think of myself as a grounded person with a wide perspective, I had narrow experiences up until that time.

At the age of 18 after high school, I joined the military and I was indoctrinated into that lifestyle. And I learned so much from it. But in a way, I hadn't seen the rest of the world. In a way, I had a unique set of life experiences that no one else, that the majority of people in this world would never, ever experience.

But that is a bubble in itself a little bit, right? So getting outside of that comfort zone, going to a civilian institution and interacting with people of various experiences, some people who were just 18 going to college. That was, that didn't come naturally to me. I had to learn how to do that. And it's hard to find similar experiences, especially if you've had extreme set of experiences in a wartime environment.

And you layer all that with … I don't say that I had post traumatic stress disorder. You can call it whatever you want.
But the truth is, I was angry after the war.

I had a lot of traumatic experiences. A lot of veterans deal with these traumatic experiences in their own way. And for me, a lot of it was anger that not necessarily directed at any one person or anything, but just … having that anger inside and, and trying to try to have a healthy way to to cope with it, cope with all that trauma and all that loss I had.

All the while I'm trying to fulfill my obligations as an officer candidate and work a part time job and also my son was born at that time. It was really one of the hardest transitions in my life … but I became a lot stronger for it, in a different way.

Because that wasn't something that I really learned in the SEAL teams.