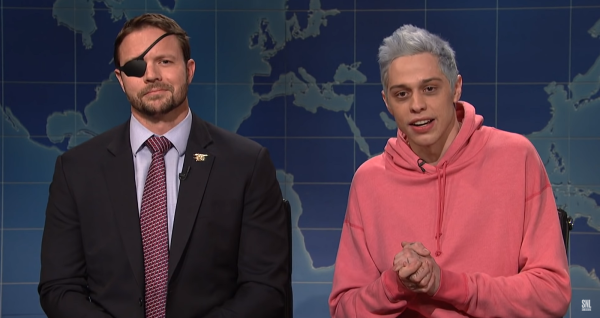 Davidson faced a landslide of criticism from just about every corner of the internet for the joke — among other things — and within a week, both the comic and the congressman were on SNL where Davidson gave what appeared to have been a heart-felt apology.

Or so it seemed.

“I didn’t think I did anything wrong,” Davidson said in the special. “It was like words that were twisted so that a guy could be famous.”

“I made fun of this guy with an eye patch and then I kind of got forced to apologize ‘cause, like, people were threatening to shoot me in the face,” Davidson said.

Davidson also claimed that he wasn't aware of how Crenshaw lost his eye until moments before he went on set — because apparently nobody at SNL knows how to use Google.

“They wait till the last minute” to do research at SNL, Davidson said, before sarcastically adding that he had no way of knowing how Crenshaw lost his eye: “It could have been in Afghanistan, it could have been making a sandwich, I have no fucking idea.”

As for how the joke came to be, Davidson said he was directed to roast candidates running for office.

“Then this guy, Dan Crenshaw pops up, and he has an eye patch, and I'm like 'this guy, he has a sense of humor,'” Davidson said. “Is that wrong? If you lose your eye, there's like three other things you could do before you go eye patch. I'm not being a dick, seriously. You go glass eye, then you go glass eye with the glasses over it, then you go fuck'n sunglasses, and then you get an eye patch. So I was like, this guy is funny. This guy is self aware. What a sport.”