Robert O'Neil, the Navy SEAL veteran who purportedly fired the shot that killed Osama Bin Laden, is having a rough one 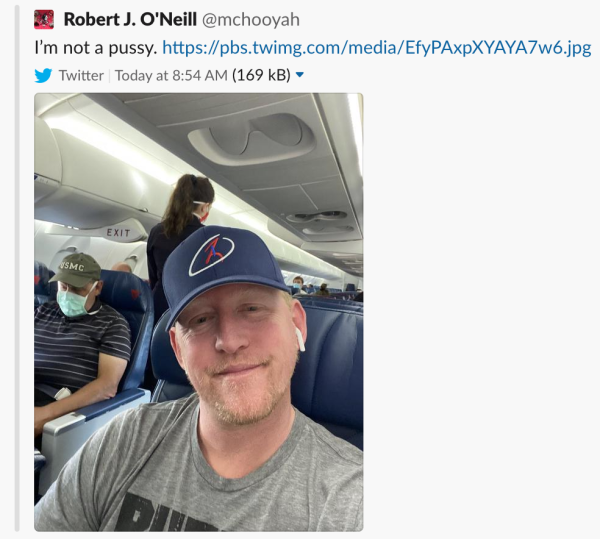 Update: Since this article was published, Rob O'Neill says that Delta has banned him from traveling on its passenger planes.

I just got banned from @Delta for posting a picture. Wow.

Robert O'Neill, the Navy SEAL veteran who purportedly fired the shot that killed Osama Bin Laden, is having a rough one on Twitter — all over the perceived indignity of having to wear a face mask.

On Tuesday, O'Neill posted a photo of himself to Twitter aboard a Delta flight without a protective face mask, despite the fact that the United States is still in the middle of a major novel coronavirus (COVID-19) pandemic.

The photo was accompanied with a simple message: “I'm not a pussy.”

O'Neill later deleted the tweet, but here's a screenshot:

There are a few things troubling about this tweet. First, traveling in a public place without a face mask currently violates about every decent counter-COVID-19 order known to man, mostly because masks don't just protect the wearer but halt the potential spread of the virus to others, according to the Centers for Disease Control and Prevention.

Second, there's a gentleman in a USMC hat in the background that we assume is a Marine veteran, which makes this tweet an accidental example of a sailor shitting on a Marine (to his credit, O'Neil says he didn't even see the guy behind him).

But third, O'Neill's tweet didn't disappear on its own, because Mr. Scary Navy SEAL's wife apparently deleted it for him:

But it's OK because it was just a joke, you guys!

I do wear a mask, @Alyssa_Milano … this attempt at a joke did NOT go over well… https://t.co/LgQR6UzN0d

I’m not afraid of the mob. Come get some.

So to be clear: the man who purportedly shot Osama Bin Laden spent all day basically melting down on Twitter over having to wear a face mask for the good of everyone.

O'Neill did not immediately respond to Task & Purpose's request for comment. In the meantime I'm just going to leave this here:

In attempting to use his wife as a shield, he suddenly found that he and Osama had something in common after all https://t.co/PY5DVzgSZs